Nestled in central Oregon’s high desert on the Warm Springs Indian Reservation, the training facility at Kah-Nee-Ta provides amenities absent from most FAA -approved test ranges, including an 18-hole golf course; a swimming pool; and activities such as horseback riding, kayaking, and tennis.

This summ er, 10,000 years of history and culture met the cutting edge of the next great technological revolution in the high desert of central Oregon. “What we’re creating here is a destination training center,” said Aurolyn Stwyer, the Test Range Manager for the Warm Springs Indian Reservation. “When it’s complete, it will be a 5,400-square-foot facility that will
include a classroom, offices for the instructors, and 17 dedicated simulators for learning how to fly drones.” Even before moving ahead to build the training center, the Warm Springs FAA
UAS Test Range offered a formidable lineup of assets for the drone innovator looking to fly experimental hardware. To begin with, the range encompasses the entire 1,000-square-mile
reservation and includes a variety of terrain, including desert, forests, mountains, and canyons. It also has wild populations of elk, deer, bear, cougar, coyote, and many other species for conducting conservation projects, in addition to 20 miles of de-energized high-voltage transmission lines; it’s literally the perfect subject for infrastructure inspection testing and training. Then there is the application that originally caught my attention: wildland firefighting.

Burn, Baby, Burn!
Here at the Roswell Flight Test Crew, we’ve been flying alongside firefighters since 2011 to show how drones can help them do their difficult and dangerous jobs just a little bit better and safer. We relish every chance we get to participate in a live-fire training exercise—but those opportunities are few and far between. You see, deliberately starting a fire requires permission
from multiple agencies of government, even if the group doing the burning is a local fire department trying to give its firefighters a potentially life-saving training opportunity. It just doesn’t happen very often, but this is where the Warm Springs Indian Reservation has a crucial advantage. Being a sovereign nation, Warm Springs can conduct controlled burns at its own  discretion—and its test range is the only one in the United States located on Native American land. It’s an opportunity not lost on Don Sampson, the CEO of Warm Springs Ventures, which oversees the range.
“We are uniquely positioned nationally to establish a national firefighting center of excellence,” he said. “Across the western United States, wildfire has a huge impact on our environment, and we believe this is a very important application for drones moving forward—to help safeguard life and property.”
Lift the Bucket
It was Roswell’s long-standing commitment to helping the fire service that prompted Warm Springs to invite us to participate in the groundbreaking ceremony. So we drove two hours east from our home base in Portland to the Kah-Nee-Ta lodge, which enjoys 325 days of VFR (visualflight- rules) flying weather each year. At the ceremony, I was honored to say a few words
to the more than 100 people in attendance. But this being a groundbreaking ceremony for a drone facility, I thought that we could add a little something extra to the proceedings.
So I brought our reigning hangar queen—the hand-built hexacopter RQCX-3 “Raven”—out of semi-retirement and fitted her with a small bucket that I had purchased at a local craft store. At the beginning of the ceremony, Miss Warm Springs shoveled a spadeful of earth into the bucket, and I used Raven to pull it into the sky.
The gathered crowd, many of whom had never seen a drone in the air before, turned to follow, holding their cell phones aloft to capture the moment in video and still photographs. It was a reminder to me, once again, that while this technology seems increasingly prosaic for all of us who are active in the industry, we still have a lot of work to do, educating the public at large about the safe, beneficial, and nonintrusive use of drones. 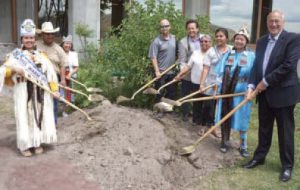