One thing that all pilots fear is their drone falling out of the sky. This could happen for a number of reasons, and if it should, there is a lot of money riding up there on that aircraft and in camera gear. One company has developed a way to save your equipment by developing a parachute that not only can be activated by remote but also can deploy on its own if needed. We had a chance to talk with Kevin Kropp at Mars Parachutes about this innovative product.

RotorDrone: Are the parachutes based on the weight or size of the drone?
Kevin Kropp: At first, there were many custom-built drones, so we couldn’t say for a specific drone. But now we specialize in the Phantom 3 and 4, Inspire, and others, so
you could say we do purpose-built parachutes. We can also make adapters for different aircraft, such as RC fixed-wing planes or unusual quads that need something different.

RD: When testing out a new parachute for a quad, do you actually try it out with the aircraft?
KK: Yes, we do. When the Solo first came out, in our first test, we actually plowed the drone straight into the ground. Once we fixed it and got it flying again, we were able to do more tests, and everything went right with them. From there, we developed a parachute system designed for that quad. Sometimes there’s a loss during testing, but it’s all part of the process.

RD: The parachute can be activated by the pilot, but will it deploy by itself if there is a problem with communication between the aircraft and the pilot?
KK: Yes, it is called “May Day.” Our circuit board has a couple of techniques to  understand when something is falling—specifically, a drone. So it will omit certain information on one specific axis—such as rotation— to a certain degree. That way, the pilot can still pan with the drone without the fear of the parachute deploying. It works by sensing high-speed rotation and the loss of gravity. 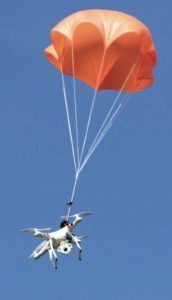 RD: Do the parachutes always work?
KK: The only problems we have are if someone packs it up incorrectly or the drone is too low for the parachute to deploy in time. But even if the drone is sideways or upside
down, the parachute will still shoot out and work perfectly. The spring ejects it with some force, and the fabric of the parachute has so much drag that it works all the time.