Connex has been in the wireless video transmission business for a long time, and it has the most reliable technology so far. When I heard that Connex had decided to design a racing drone, I knew it would be unique and cutting edge, and that is exactly what the Falcore is: an innovative and fun drone for first-time—and experienced—racers. 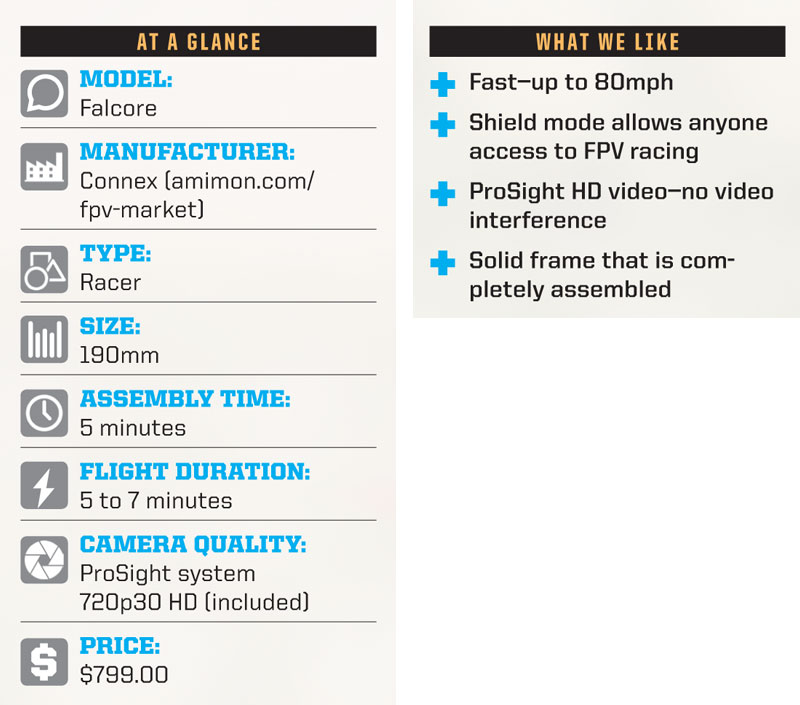 Highlights
This racer comes in a nicely designed box with everything you need inside to get it in the air. The Falcore is fully assembled with the props installed, and extra props are also included. The carbon-fiber arms are attached to the body (also made out of carbon fiber) with O-rings. The O-rings provide rigid support, but if there’s a hard impact, the arms will dislocate to prevent damage to them and the motors. All of the expensive and vital equipment (receiver, video transmitter, speed control, and camera) are protected inside the carbon-fiber tube of the body. The video antenna slides in and locks at the back top of the fuselage. A cavity at the rear of the quad allows easy access for the battery pack. 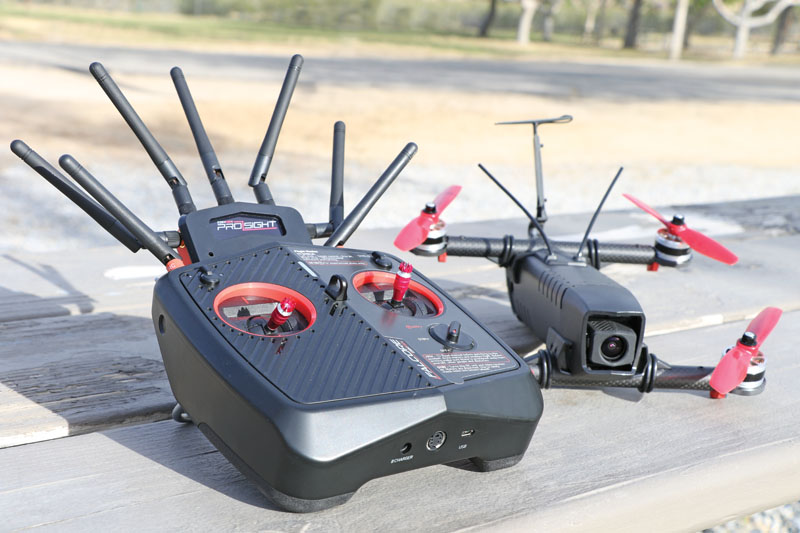 Complete package The three main components of this kit are the transmitter, the ProSight receiver, and the Falcore drone. 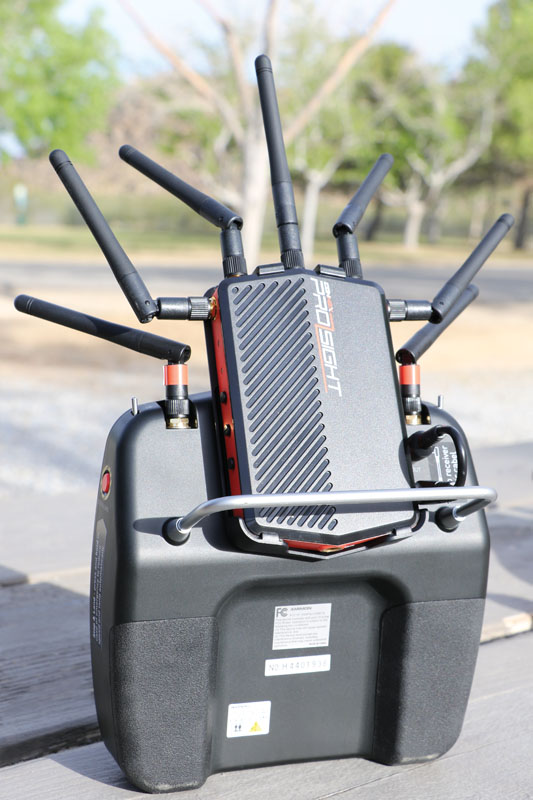 A good fit The ProSight receiver easily slides on and locks to the transmitter.

Getting this bird ready for flight consists of charging the flight battery and transmitter, then attaching the ProSight receiver to the transmitter and attaching the antennae. All of the setup instructions are on the front page of the manual.

The Falcore’s real advantage, next to its outstanding and uninterrupted video signal and up-to-80mph flight speed, is its simplicity of flight. A switch on the front of the transmitter has three flight modes: Shield, Horizon, and Acro. Shield mode is ideal for anyone who’s just getting started in the world of FPV flight (more on this later). Horizon mode keeps the drone level and cancels out any inputs when the sticks are returned to the home position, and Acro mode leaves it up to the pilot to keep everything level and to control and/or cancel any previous stick inputs. Both Horizon and Acro modes are for experienced pilots. 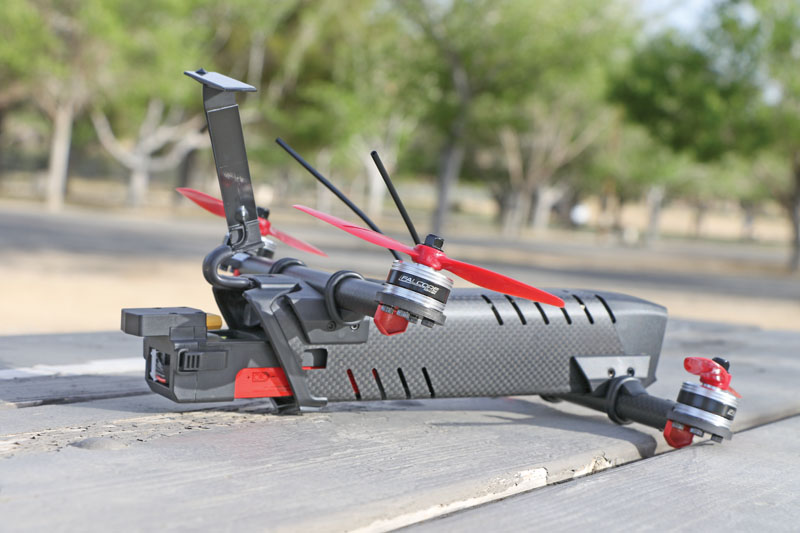 Built for speed The battery slides into the rear of the Falcore and locks in. Notice that the motors are tilted to keep the Falcore body level during flight and minimize wind drag.

Aerial Recap
Most of this section will talk about the Shield mode of flying, which is truly a fun way to learn to fly and race. In Shield mode, the drone flies in the direction of the right stick. The racer’s altitude is controlled by the left throttle stick, and the Falcore will fly just 3 feet above the ground. Its flying height is regulated by the two sensors on the bottom of the bird. In addition, if the right stick is pushed to the left, the quad combines the bank and yaw in that direction to fly a smooth turn every time. You can add in additional yaw with the left stick.

The three-way on/off switch has a standby click that turns on the transmitter and powers up the Falcore so that the video feed starts and can be seen in the goggles. Moving the switch to the arming position will allow the motors to start up when the throttle stick is pushed forward.

When you’re flying the Falcore, it will maintain its altitude relative to the ground, and it’s fun to watch the altitude change as the racer moves over higher and lower ground. Be aware that grass, snow, and water may interfere with the sensor. There are no sensors to prevent the Falcore from crashing, but it can take a pretty good hit and still fly.

Self-Leveling and Stop & Land Features
There are two features on the Falcore that help out folks who want to advance their flying skills while still having a safety net available if they need it. These two features are the Self-leveling action in Horizon mode and the Stop & Land button. When you’re flying in Horizon mode, you have full control of the quad. You can bank, roll, or loop, but if you become disorientated, just let go of the sticks and the Falcore will right itself and level out. That’s a cool feature to have when you are learning new moves, but it gets even better! In any mode, you can hit the Stop & Land button for quick action: the quad will immediately upright itself (if needed) and stop in a level position, then slowly begin to land. If you let go of the button, the quad will then continue its flight; continue to hold it down and the Falcore will continue to descend and land. These two features make the Falcore a perfect quad for any pilot, not just the beginner. 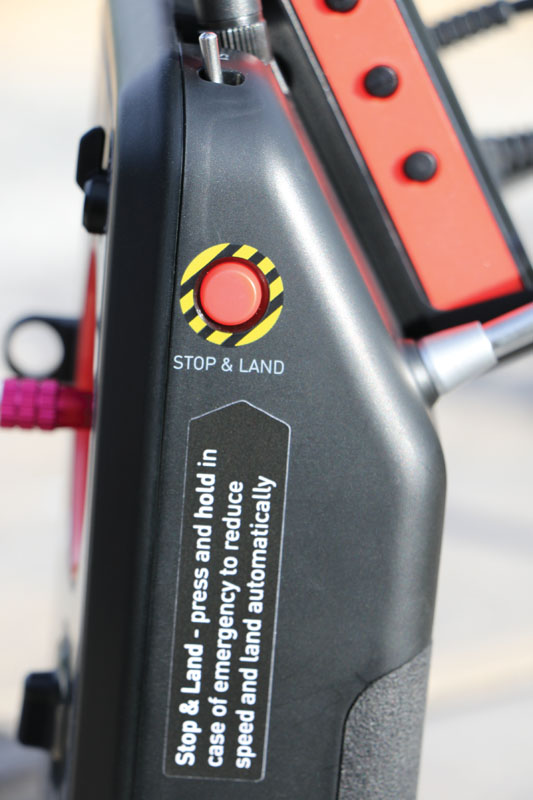 Emergency exit The Stop & Land button is located on the side and within easy reach. 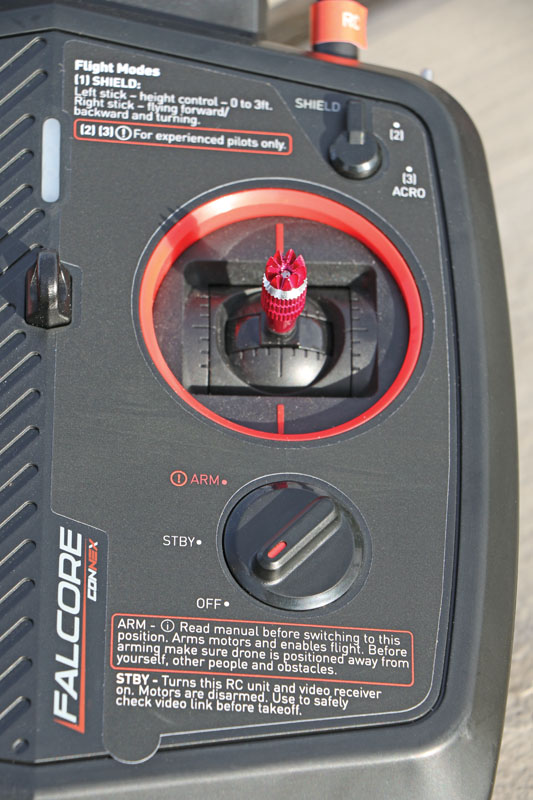 Mode Selection The Shield, Horizon, and Acro mode switch is located at the upper right on the controller. The standby and arming switch is at the lower right.

Bottom Line
The Falcore is designed for new racers who might be intimidated by hard-core drone racers that require skill and practice. But that doesn’t mean an experienced pilot will not enjoy this up-to-80mph bird; I am having a blast flying it—and so will you. 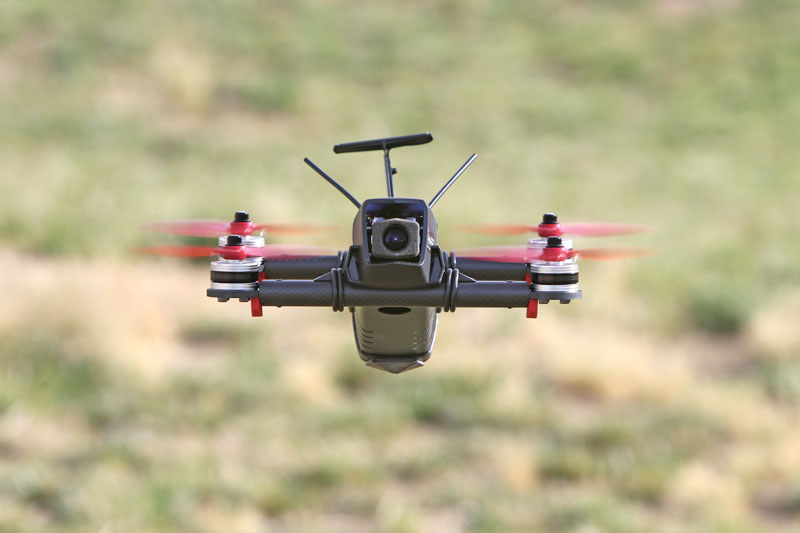