A commercial drone for many applications. The new Yuneec H520 is designed for professionals who are looking to incorporate drones into their business. Built on Yuneec’s proven six-rotor platform, the H520 incorporates the proven six-rotor platform. Yuneec offers three cameras that can be swapped out while the H520 is on, so it is a bit more robust and has a number of improved features over its predecessor. 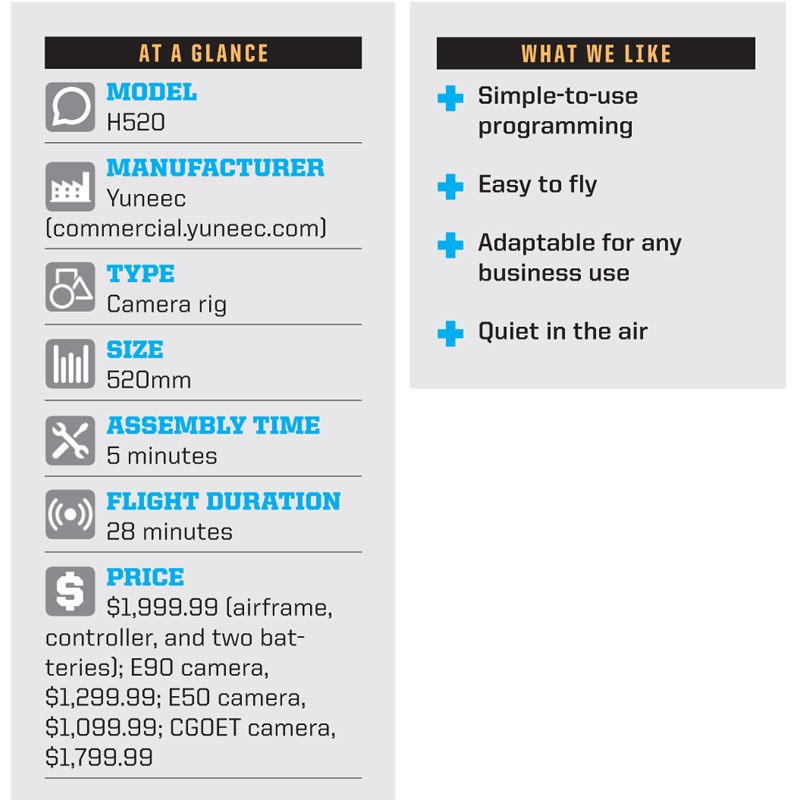 This nice compact setup is simple to program and makes it easy to get this drone out there and working. 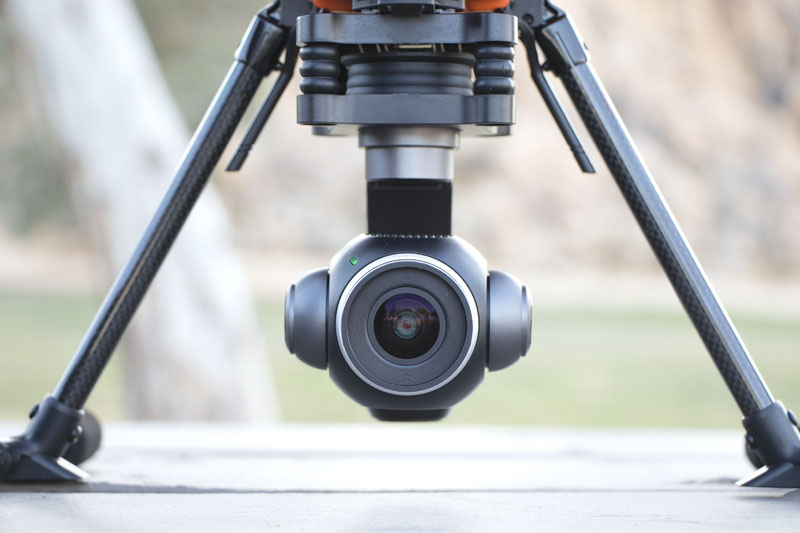 The E90 is a wide-angle, high-resolution camera that produces high-quality photo and video.

Highlights
Included in the package are the H520, props (and some spares), two batteries, a charger, the ST16S controller, and a case. With the exception of charging the batteries and controller, the H520 comes out of the case ready to go for your first aerial mission. For our tests, we used the high-resolution, full-frame sensor, wide-angle E90 camera and the high-resolution, medium focal length, cropped sensor E50 camera. A CGOET camera, which has thermal imaging and low-light lenses, will be available by press time.
Of course, the first thing to do is to put a battery on the charger and plug in the controller so that they can get charged up. This process takes 20 to 90 minutes. After removing the H520 from the case, lift the arms and lock them into place. Now you can attach the props, lock them on, and install a charged battery and insert a micro SD card into the slot on the camera.
I wanted to check out some of the new programming features that are available to see just how easy it is to swap out the cameras, so I turned on the controller and the H520. After taking some video and images with the E50, I just slid it off the bottom mount and slid on the E90. In a few seconds, the connection was made, and with a push of the button, the video from the E90 was on the controller. This can be a real time-saver if you need to jump back and forth between cameras. During a search-and-rescue operation, for instance, you could use the thermal-imaging CGOET to pick up a heat signature, then quickly mount the E90 to get a sharper image to confirm if the object is a person. It was now time for me to get this drone in the air and see what it could do. 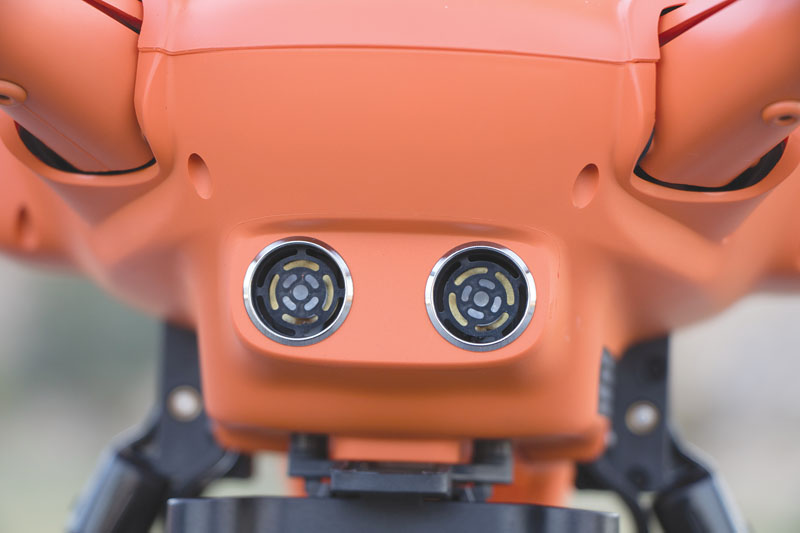 These two front sensors work with the obstacle-avoidance system to avoid any accidental strikes. 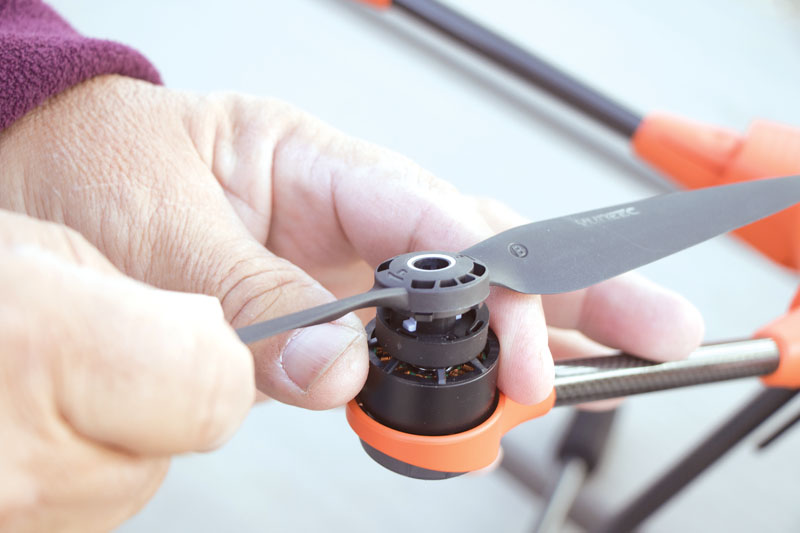 Only the correct propellers can go on the correct motors, and they are easy to lock on and pull off. 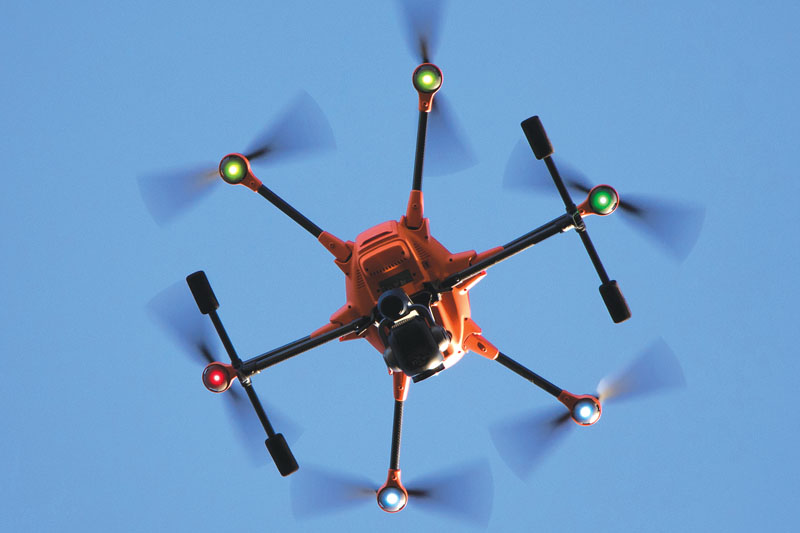 Survey Programming
It’s easy to program and fly the H520 for surveys. If you have a hot-spot setup on your phone, you can use it to download maps on location, but I like to download the maps the night before so that they are stored in the controller itself. This makes them easy to use, even if I am at a location with no Internet connection. Once on location, I start the ST16S controller, get to the plan menu, and then select survey mode. A grid of white lines (flight paths) and a green overlay show the survey area. White dots at the corners of the square are movable; you just press and slide to change their position on the screen. As you do that, the survey section changes accordingly, and if an odd shape is needed, other control dots can be added to change the outline. When your survey plot is set, you need to upload it to the H520, which keeps it in memory during the flight. Even if the H520 loses the controller signal, it will continue on with the program. Move back to the flight screen and start DataPilot; the H520 will take off and fly the course outlined, shooting the correct number of photos so that all of them overlap to make up the final image. The program also lets you know how many batteries are needed to complete the survey, and the drone will land automatically for the battery changes and then continue back to the last location to finish the program. When it’s done, the H520 auto-lands at the takeoff point and you can off-load the images. Yuneec has launched a partnership with Pix4D; starting this January, Pix4Dcapture mission-planning app will be supported and preinstalled on the ST16S controller. 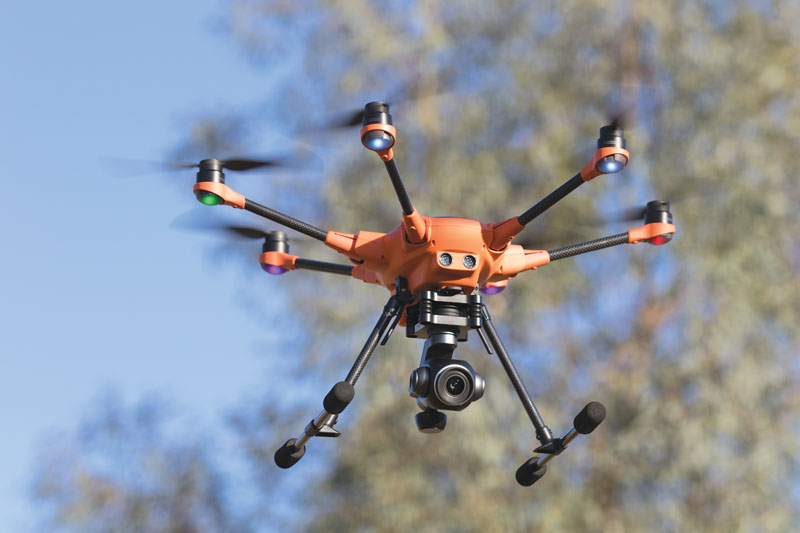 Waypoint Programming
Another feature on the H520 is waypoint pro­gramming, which allows the pilot to plot the course the drone will take and what it will do. Under the plan menu, select the waypoint menu and place a point on the map. The home point will already be marked on the map, and this will usually be in the center of the screen. Each time you press on the screen, another waypoint appears labeled with the next number. To the right on the screen is a drop-down menu that lets you program what you want the drone to do as it goes from point to point. This can include the speed at which it travels, what to do with the camera during that time (take photos, take video, or do nothing), and the direction in which the camera should point. If you press down, another waypoint appears, and a corresponding menu for that waypoint comes up on the right of the screen. After you have the last waypoint in, you can tell the drone what to do when the program is finished. In most cases, you’ll have the H520 return to home. This programming can be used for search and rescue, drone panoramic images, and drone hyperlapses.

Bottom Line
With its retractable landing gear, high wind resistance, swappable payload options, 360-degree camera view, and wide array of programming, the H520 can easily be the perfect drone for your business. If you are looking to incorporate a drone into your commercial aerial workflow, be sure to check out the adaptable Yuneec H520.