Everything that grows and is harvested in agriculture is dependent on pollination. Bats, birds, bees, and other flying insects are the main pollinators that we depend on to pollinate our crops. According to a recent United Nations report, about 75 percent of the world’s crops, including apples, oranges, cherries, carrots, and even coffee, depend at least in part on natural pollination. But today, many pollinators, particularly insects like bees and butterflies, are under threat. There has been a marked decline in insect-pollinator populations, and without these little guys, the fruits and veggies we consume are in danger of serious decline. What’s needed are artificial mechanisms to help out
nature’s pollinators.

And it looks like help is, indeed, on the way. Researchers in Japan recently used a tiny drone to successfully pollinate flowers. They attached a patch of horsehair bristles from a paintbrush to a miniature RC drone, and they coated the bristles with a special ionic liquid gel. This sticky gel is a crucial part of the process as it needs to capture and then deposit the pollen. The gel used with the drone isn’t water based and so doesn’t dry out. It worked perfectly, and the pollination of large wild lilies in the test was confirmed
with fluorescent microscopy. One of the authors of the study, Eijiro Miyako, of the National Institute of Advanced Industrial Science and Technology in Japan, says, “This is the world’s first demonstration of pollination by an artificial robotic pollinator.”

Much work remains to emulate the complex behavior of insects and animals, but these early experiments are a great first step to help supplement the declining numbers of nature’s pollinators. 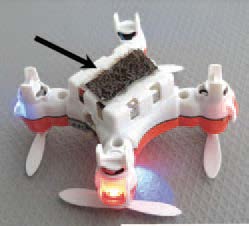 Here is a photo of the quadcopter used
in the research. You can see the patch of horsehair bristles coated with the ionic gel used to collect and deposit pollen.