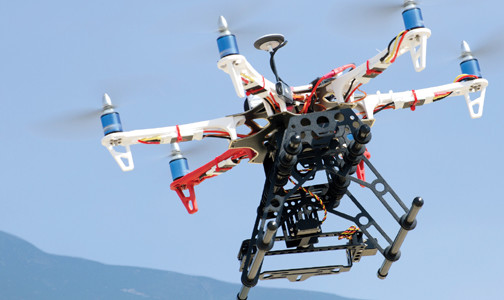 The word “drone” has dominated the news, so it’s no wonder that we RC modelers like the idea of having our own RC drone. Add a camera to that and you have something that is going to be a blast to fly and to review photos or videos taken while flying. One company has realized this very early on and has quickly become the leader in multi-rotor copters— DJI Innovations has four- and six-motor copters that range from beginner (out of the box and ready to fly) to expert (able to lift a very large payload) levels.

We were lucky enough to get the multi-rotor copter just below the professional outfit, the Flame Wheel 550 six-motor copter. The good folks at Atlanta Hobby also included their SR Pro Micro XL Camera Gimbal System with the Flame Wheel, so we can get some fantastic images from the air.

The perfect aerial platform for the weekend photographer or videographer

Here is the Flame Wheel 550 just before takeoff. The battery is strapped onto the top right next the GPS module.

Atlanta Hobby offers a good selection of multi-rotor birds, complete packages, and all the accessories any aspiring drone pilot could want. Our package came with the Flame Wheel 550, the Naza-M GPS package, six APC 10×4.7 SFP props, six powerful Twister 450-880 motors, two Hitec HS-5245 MG servos, and an SR Pro Micro XL Camera Gimbal System. All I had to add was some assembly time, my Futaba 10C transmitter, and a Futaba R-6108 receiver. The assembly can easily be done by anyone with any type of RC experience, and the Naza system makes this an easy bird to fly. Any novice RC pilot would have no problem with this aircraft.

The GPS module must be facing forward, using the small red arrow as a guide. Be sure to use the extended platform to raise the GPS module above any interference from the Flame Wheel.

WHEN PROGRAMED IN, THE FLAME WHEEL WILL ACTUALLY LAND ITSELF WHEN THE BATTERY GETS LOW.

Get exclusive video on our digital edition.

Assembly on the Flame Wheel 550 starts by soldering the ESC power wires to the bottom board. There are positive and negative patches that are clearly marked on the board and make it easy to solder all six ESCs to the proper location. Now the battery plug and VU module are soldered to the bottom board and that’s it for soldering. I mounted on the prop shaft to the top of the motor and then mounted all six motors to the arms. First, I laid out the arms and decided which way would be the front of the Flame Wheel, so that the two red arms could face forward. The deciding factor for me was the location where I wanted the battery plug; I decided to have it at the back of the copter. Then I bolted all six arms onto the bottom board and threaded the ESC wires through the openings on the arms.

Before even considering getting this bird in the air, I needed to download the Assistant Software available from dji-innovations.com. This allowed me to plug in the main controller to my PC and download a wide array of programing features to the Naza controller, some of which, must be programed before flying. The first is setting up the motor mixing—this lets the controller know that I am flying a hexa-rotor with the motors in a V setup. Other information that is input through the Assistant Software is the control mode switch, which puts the Flame Wheel in GPS, Attitude, or Manual mode, programing in autopilot, fail-safe modes, intelligent orientation control, voltage monitoring, and gimbal controls. Once I had all of these parameters entered, I uploaded them to the Naza main controller. Now I can start up the motors (without props on them) and make sure they rotate in the right direction. When all is correct, the props are attached and the Flame Wheel is now ready to take off.

The Flame Wheel 550 is one sweet-flying, multi-rotor aircraft that is easy for even a beginner multi-rotor heli pilot to fly. For my needs, this unit is perfect. It allows me to lift a larger video camera with solid stability, and the SR Pro Micro XL Camera Gimbal System keeps it level, regardless of the maneuver the aircraft is doing. If you are looking for a solid, stable-flying aircraft, you would be hard pressed to find a better one than the Flame Wheel 550 Pro.

Six of these powerful motors, available from Atlanta Hobbies, provide more than enough power to lift a good-size payload.

Now, the Naza main controller is placed in the proper orientation so that the front of it is facing forward and each of the plugs for the ESC are plugged into it. At this time, I also plugged in the VU module, the GPS/compass unit, and three short servo extensions, one for the Futaba S.Bus receiver and two for the camera gimbal servos. I mounted the Naza main controller on the center of the bottom board with double-sided tape. All of the wires were tied down neatly and the top cover was bolted into place. The GPS/compass unit was mounted on top in the proper direction with the little tower setup included with the GPS; again the wires were neatly tied down using a cable tie. The last thing I needed to add was the R-6108 Futaba receiver, which was attached using double-sided tape. The single S.Bus plug makes connecting the Naza main controller to the receiver a snap.

Photography and the Multi-rotor

One of the main features of any multi-rotor flying machine is that it is a very stable platform for any type of aerial video/photography. They are easy to fly and turn in any direction and will hover in one spot for any length of time (depending on the batteries). All one needs is a camera gimbal system such as the Atlanta Hobby SR Pro Micro XL Gimbal and the Naza main controller.

The SR Pro Micro XL Gimbal has a camera cradle that is connected by two servos that allow control of both the pitch and roll of the camera. These two controls can work with the multi-rotor copter or independent of it, depending on your needs. The Naza main controller has two ports for servo plug-ins that allow the camera cradle to have its own independent stabilization. When the two servos are plugged into the Naza, it will keep the camera level even when the aircraft is rolling or tilting from side to side.

But if you would like to have a separate camera person to control the aerial camera cradle, just plug in the two servos to a separate receiver so they can control the camera movement with another transmitter. In this case, you would need some type of first person view (FPV) device so they can see what the camera is pointing at during flight. Either way, you will find having a camera cradle with a gimbal system connected to it to be a great aid to your aerial photography.

My focus now turns to assembling the SR Pro Micro XL Camera Gimbal System, which is also a large landing gear for the Flame Wheel. The assembly is straightforward and the directions are available at atlantahobby.com. The key point is to make sure the servos are centered before mounting them in the camera cradle—this just makes final adjustments a little easier. The completed assembly is now mounted to the bottom of the Flame Wheel using the included bolts and washers.

Here is the bottom board with all the ESCs and the main power plug soldered in place. Next, we add the arms and top plate.

The Flame Wheel 550 assembly can be done in just a few evenings if you have a few construction projects like this under your belt; otherwise, just add a couple more evenings and it will be complete. I would recommend getting the receiver-ready kits, along with the SR Pro Micro XL Camera Gimbal System. This way, everything except the receiver and battery is included, so you can get into the air quickly. This is when the fun will really start!