One of the things I enjoy about being a drone attorney is traveling across the country to attend and speak at many of the UAS (unmanned aircraft systems) industry conferences. The best opportunity I had recently was to hear directly from the Federal Aviation Administration (FAA) itself at its UAS Symposium in March in Reston, Virginia. Cosponsored by the Association for Unmanned Vehicle Systems International, the three-day conference was packed with substance and afforded the rare ability to hear directly from the FAA leadership who make the policy decisions that affect all of us in the UAS or “drone” industry.

My main reason for attending was to decipher the “secret sauce” for successful waivers under Part 107, the federal regulation for small drones weighing less than 55 pounds, for flights beyond visual line of sight and flights over people. While I was disappointed that none of the “secret sauce” was ever revealed—Earl Lawrence, the FAA’s Director of the UAS Integration Office, explicitly acknowledged this in an address to the audience at the end of the second day—I did learn a bit more of the “philosophy” or reasoning of the decision makers of those waiver applications, which may be just as important. I will share some of that with you.

There’s not enough space in this article to go into everything covered at the conference. Unfortunately, I’ve had to omit some topics, such as the FAA’s upcoming Low Altitude Authorization and Notification Capability system, the online airspace and 107 waiver webpage, and the newly announced Aviation Rulemaking Committee for remote ID and tracking of drones. This article will address what many companies large and small are champing at the bit for: FAA permission to fly beyond line of sight and over people.

Safety Culture
From an agency whose sole mission is safety of the national airspace, it doesn’t come as a surprise that safety would be a top priority. This conference provided a more particularized discussion of how and why safety matters and how it can be ensured (more “granular,” in Silicon Valley speak). The theme of safety appeared over and over again in nearly every panel discussion at the conference, whether it was counter-drone measures to protect airports, software security for drones (open-source software was mentioned as a concern for flights beyond visual line of sight and flights over people), or the part of UAS I have been impatiently waiting for: approval for large drones weighing several hundred pounds.

You Will Have to Do Your Own Work
For those of us in the private sector wanting higher-value access to the National Airspace System, as with flights beyond visual line of sight and flights over people, I can share with you one overarching principle to help you come up with your own attempt at a successful Part 107 waiver (or maybe even an airworthiness certification): The FAA wants a demonstration that you, as an operator, have fully absorbed the same safety culture that is in manned aviation. This appears to be one reason why the FAA is not publishing the actual petitions of folks that are applying for waivers for flights beyond visual line of sight and flights over people. If the FAA did, many people might do what lots of applicants did with the old Section 333 petition process: They merely copied somebody else’s petition or maybe hired a company that did it for them without tailoring the petition to the actual operations for that company or individual. The FAA found that many people who were operating under Section 333 approvals had no idea what the approvals even said. I don’t think that really demonstrates a commitment to safety, do you?

So from the FAA’s point of view, the gates to the coveted high-value National Airspace System of flights beyond visual line of sight and flights over people, and other Part 107 waivers are wide open, but it will not provide any guidance on how to write a successful application. This seems unfair. One prominent industry person with whom I have spoken thinks that this looks like “an insider’s game.” But by attending the FAA UAS Symposium and hearing directly from the FAA leadership, I now have some measure of respect for the FAA’s reasoning. I might not totally agree with it, but at least I have a better sense of the reasoning.

Information I Found Helpful
Fortunately, there were some helpful guideposts presented both from the FAA and from Diana Cooper, PrecisionHawk’s senior vice president of policy and legal affairs. Cooper’s presentation discussed the company’s participation in the FAA Pathfinder Program, which seems to have resulted in PrecisionHawk’s approval for extended-visual-line-of-sight operations—and perhaps more. While PrecisionHawk wasn’t letting out its own “secret sauce” leading to approval, Cooper’s presentation described the company’s research, which showed that visual observers could detect manned aircraft entering the area far enough away to allow the Remote Pilot in Command to safely avoid a midair collision when the PrecisionHawk UAS is up to 2.5 miles away.

So what did the FAA say that was helpful to readers hoping to obtain a high-value Part 107 waiver, such as for flights beyond visual line of sight and flights over people, and needing to show they were really participating in a culture of safety?
Here are several key points: 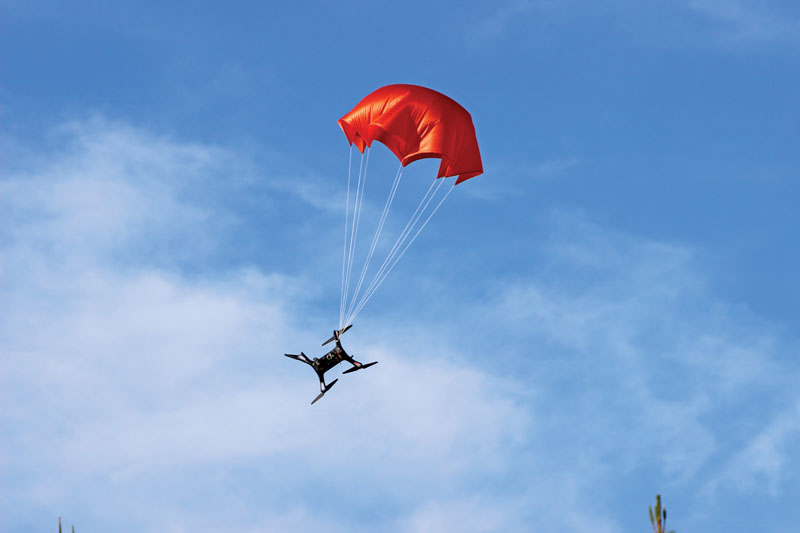 Perhaps the ultimate safety device, the Mars Parachute can be activated remotely but will deploy on its own if needed.

What I Believe Was Missing
From what I saw and learned, I have some concerns with the process. First, we still have little idea what preferences the FAA may have in evaluating various risk mitigations. For example, is there a preference for special equipage (like a parachute) over operational conditions (like agree­ing not to hover over people and, instead, just briefly pass over them) or vice versa? I had hoped for a little more insight from the FAA in this respect. Without FAA guidance, each operator is left to speculate and perhaps experiment with waiver petitions using one equipage and then another, and one condition and then another. Each attempt at a Part 107 waiver is expensive in expenditures, time, and opportunity cost. This uncertainty and waste of time lends itself to the United States growing further and further behind other countries’ UAS industries. Companies that can afford to go through this process once might go out of business before they can finally achieve an approved waiver. Or they might abandon their UAS efforts entirely and focus on something else that brings greater return on investment.
Second, if you need to show research data to demon­strate you have effective beyond-line-of-sight risk mitigations, how the heck can you do so without having approval to do the very kind of flights you need to do the research? It is a classic Catch-22. My understanding of the FAA’s answer to this conundrum is to either work with someone who has already obtained approval or to do the research abroad. These options seem unsatisfactory. My firm is currently working with a client on their beyond line of sight waiver aspirations with an FAA test site. We are lucky. From our experience several months ago, contacting the FAA test sites across the country to find out what the costs were, what needed to be proven, and what activities would be necessary while there was a frustrating and opaque process. I was not surprised to hear from one industry leader that a number of test sites are losing money and actually have little activity. This must be very disappointing to states who worked so hard and spent so much money to become an approved site.

Doing Your Own Work May Save a Life
(and the UAS Industry)
Finally, there is one more takeaway from the UAS Symposium that I would like to share. The FAA seems to be aware that an incident involving a drone will create public pressure on politicians to “do something about it.” If you don’t want to be responsible for hurting or killing another human being, please take the safety culture seriously. It not only will help you on working toward a successful Part 107 waiver but also might save lives. Think about this: Just one serious incident may result in Congress and the Administration clamping down on our nascent industry before it develops into common use. That would stop our progress saving the lives of workers doing dangerous jobs and saving companies money by using drones instead. Copying and pasting someone else’s work won’t cut it. Do your own work, and prevent harming the life of another as well as the life of our UAS industry. K
By Jeffrey Antonelli

Disclaimer: None of the author’s accounts or impressions of the FAA UAS Symposium has been reviewed by the FAA, and they are, therefore, just the author’s opinion. And as always, none of this article constitutes legal advice. Please consult an attorney if you have legal questions. Associate attorney Amelia Niemi assisted Jeffrey Antonelli with this article.