One of the questions we get all the time is why are there different frame rates for
some of the screen resolutions on my camera?   And which frame rate should I use?
Most cameras have the option for pilots to select not only the screen resolution—such as 640×480, 1280×720, or 1920×1080—but also different frame rates for each resolution. These can include 24, 25, 30, 60, or even up to 120 frames per second (fps). But before we can talk about frame rates, we need to know what the “i” and “p” that follow the capture frame rate mean. Video is nothing more that still frames shown in rapid succession; each frame has a little different placement of the moving object in it, so when they are delivered at, say, 30fps, the object appears to our eyes to be moving. Now, there are two different ways to show this movement per frame and that is where the “i” and “p” come in.

Simply stated, the “i” or “p” after the capture rate indicates whether the video is interlaced (“i”) or progressive (“p”). Interlaced frames show only half of the image at a time. If, for example, you have 720 vertical lines of resolution, the first frame will show all the odd-numbered lines from 1 to 719. The second frame will show all the even-numbered lines from 2 to 720, the next frame will again show all the odd-numbered lines, the one after that the even-numbered lines, and so on. So you really never actually see a complete image in any frame. Of course, this happens so quickly that our eyes perceive that data as if it were full frames. In contrast, the
progressive frames actually display a full frame (all the lines of data) each time that an image is displayed. In most cases, you will see this represented as 30p or 60i. Both show 30 frames of data per second; 60i just does it at half a frame each time.

Which is better: progressive or interlaced? Generally progressive is regarded as the better resolution, and here’s why. Let’s take 30p and 60i as an example. The 30p video
displays a full frame each time; the entire snapshot is displayed for 1/30th of a second and then the next for 1/30th of a second, and so on. If you freeze the motion, you will see a complete unbroken picture or image. With 60i, however, only half of the image is up for 1/60th of a second, which means that if the motion were stopped, we would only see half the image/resolution of the frame; the second half of the image would already be gone. This type of projection/resolution can cause artifacts to appear in the video and tends to blur detail of moving objects because we are viewing half of one frame with half of a different frame. In most cases, you will want to go with the progressive capture. But if you are shooting fast moving objects, as is the case in many sports activities, the
interlaced images give the impression of less flicker or jumping movement between frames and may look more smooth, even if at a slightly lower resolution.

Here is where the concept of frames per second (the number of frame or photos taken in one second) comes in. The standard frame rates used in the United States and Canada are the NTSC (National Television Standards Committee) standards of 24p, 30p, and 60i. The rest of the world uses the PAL (Phase Alternating Line) standards of 25p and 50i. A frame rate of 24p was used for film cinema and so now, when video is shot at 24p, it is said to have a “cinema-like” motion blur, although more is required than just frame rate to make a true cinematic movie. The best and most often used frame
rate is 30p in the resolution that you prefer using (640×480; 1280×720; or 1920×1080, 2K, or 4K). If you like shooting sports and action subjects that are moving at high speed, then you might want to try 60i and see how that looks. If you are looking to output the finished piece with slow motion, shoot at 60p or 120p if your multirotor camera allows it.
Remember, 60i and 60p are different; 60i takes half a frame every 1/60th of a second,
for a total of 30 complete frames per second, and 60p takes a full frame every 1/60th of a second, for a total of 60 complete frames per second. 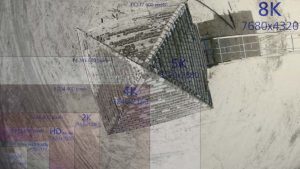