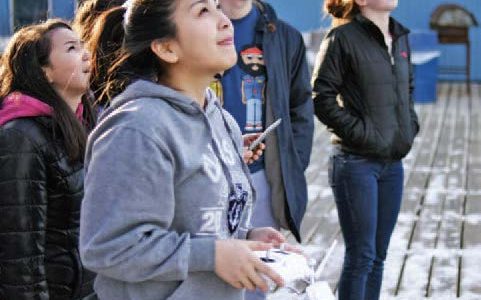 Drones in the Alaska Classroom

On a dirt runway 60 miles outside of Fairbanks, Alaska, Wally Flynn kneels over a DJI Phantom drone. He checks its gimbals, notes the conditions of the propellers and the camera attachment, listens for any alert sounds, and backs away. At each step, he recites what he has just done, part of a rigorous preflight procedure.

But it’s difficult to understand a word of it because Flynn is speaking in Yup’ik, an Alaska Native language only spoken by about 10,000 people. A high-school senior from the village of Chefornak, Alaska, Flynn has come here to Chena Hot Springs Resort as part of “The Modern Blanket Toss,” a program to bring cutting-edge drone technology to Alaska’s rural high schools.

“The purpose of the project is to expose students to science-related activities that broaden their horizons,” says John Monahan, who heads Alaska’s Upward Bound
program and is in charge of the project. “It’s meant to be something captivating that’s fascinating and interesting to them, and gives them a hook on what a possible future
career could be.” 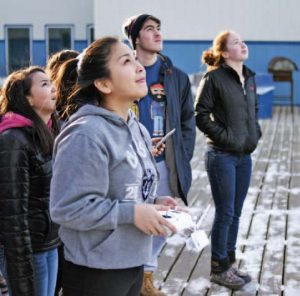 “The Modern Blanket Toss,” named after an Inupiat Eskimo tradition of tossing a person skyward via a taut blanket to spot faraway game, is a three-year project to use drones and geographic information system (GIS) technology to excite high-school students about science and technology careers. The program, funded by the National Science Foundation, draws underprivileged students from Upward Bound programs in five rural Alaska high schools, about 98 percent of whom (by Monahan’s estimate) are Alaska Natives. Students learn about unmanned aerial vehicles (UAVs) through after school
activities, receive immersive training in them during a residential summer program on the University of Alaska Fairbanks (UAF) campus, and then use the drones to undertake mapping projects to benefit their communities.

At least, that’s the theory. As Monahan stresses, this is a pilot project, and not everything has gone as planned. He describes a three-year process of dealing with the
challenges of harsh Alaska weather; isolation (three of the five schools are inaccessible by road); and fragile, quickly outdated technology. “We really didn’t know that much
about UAVs three years ago, and part of it was a huge learning curve for us and documenting everything we have discovered along the way,” he notes. “Some of the
best learning was fixing the equipment and mapping the UAVs, figuring out what was going wrong.” 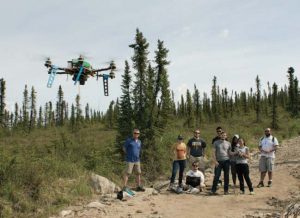 Students and instructors pilot a custom-built drone on a mapping mission at Chena Hot
Springs Resort near Fairbanks, Alaska, in May 2016. (Photo by Tom Moran/Alaska EPSCoR)

As a result, the program has been in a constant state of adaptation and improvement. The initial plan was broadly to use Arducopter 3DR Quad D UAVs for the program, but
they were quickly supplanted by a wide range of makes and models to meet particular needs. DJI Phantom 1 and 2 quadcopters have been some of the workhorses of the program. Smaller and more affordable drones were also incorporated so that students could train with them indoors during (frequent) bad weather. Then drone building was incorporated into the program via K’nex kits, and later, the students designed and constructed a hexacopter from scratch, which was duplicated by UAF technicians. One major innovation adopted midprogram was the creation of a “UAV flight school” in which students earned an unofficial “pilot’s license” by accomplishing certain tasks, and another was the creation of a linked GIS program in which a subset of the students
worked on turning aerial data into maps. “There are going to be groups of students that glom onto individual pieces and have skills or interest in different areas,” Monahan notes. “Some students were really good at flying, and that’s all they wanted to do; other students were bored to death with that and wanted to do more with the software.”

Drone Projects
Even as some program emphases have shifted, students have still had the opportunity to use the drones for multiple projects. In summer 2014, students mapped out the Frisbee golf course on the UAF campus and, in summer 2015, made similar maps of beaches and recreational areas around Fairbanks. During the school year, students in the town of Nikiski and the village of Chefornak worked on projects to map out methane
pockets in nearby lakes and rivers. Bethel students looked for patches of rotten ice on the Kuskokwim River that could be a danger to travel. Shishmaref students mapped the erosion eating away at their coastal village. And high schoolers in the town of Seward worked with the local Flood Control Board to make 3D maps of inaccessible mountain valleys to help chart their potential for contributing to flooding. Monahan says, “The students seem to plug into community service—helping somebody, and having a product they want to show in the end.” 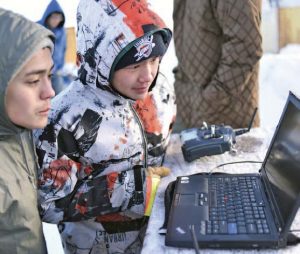 The continued effort to put the drones to good use was what brought Wally Flynn and 15 fellow high schoolers to Chena Hot Springs Resort for two sunny days in May 2016. Resort owner Bernie Karl has grand plans for expanding the property and wanted some elevation data, and in exchange, he hosted the students and offered them tours of the resort, which features sustainable elements like greenhouses and a geothermal power plant. “It just seems to me like it’s a win-win situation for them and for us,” Karl says. “We get some knowledge that we can use for responsible development, and they get an opportunity to learn about sustainability.”

Under wispy cirrus clouds, a group of students, instructors, and technicians hiked up a hill above the resort, set up a hand-built hexacopter in a clearing amid spindly black spruces, ran through the customary checklist, and let it fly. Manning the controls was Bethel student Danielle Kashatok, who watched intently as the drone elevated hundreds of feet and entered into a preprogrammed routine to map the area. Kashatok says
that the project fits in with her career aspirations. “I want to be a pilot when I grow up,” she says. “I feel like a pilot when I’m using the controller.”

Behind Kashatok, student Cyrus Kinegak of Chefornak alternated between studying the feed from the drone on a laptop and writing Yup’ik words in the dirt. Kinegak says that the Modern Blanket Toss also fits well with his own goals. “I would like to follow in my brother’s footsteps; he used to be a pilot,” he says. “One of my dreams is to become a pilot, and using UAVs includes a lot of aviation.” Kinegak is considering enrolling in ground school after graduation, but he also has plans in the meantime: He impressed Karl enough during the visit that he was offered a summer job.

Mission Ready
Meanwhile, down the hill in the resort itself, Flynn and another set of students were staging their own mission: getting in some flight time with a DJI Phantom with the loose idea of making a promotional video about the resort. Flynn maneuvered the drone between the area’s tall aspens and slowly followed on foot, while other students pretended to be tourists, walking past a pony corral and staring into a chicken coop. They later continued past outdoor hot springs, around a huge dragon sculpture,
and over a large arch marking the main resort entrance, until the Phantom clipped a branch and augured 10 feet straight down into a parking lot. Students and instructors
picked it up, inspected it, and sent it flying again within minutes. “It’s amazing how much these things can survive,” notes Adam Low, a curriculum developer with the project. 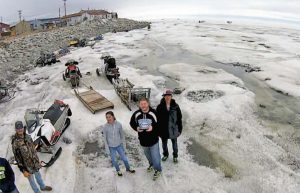 Perhaps. On the other hand, talking to the students and instructors gives a telling glimpse into the challenges of using UAVs in Alaska. Flynn says that plans to map
methane bubbles in Chefornak were hampered when they couldn’t get hold of the proper thermal camera. Kinegak says the Bethel project was delayed when a miscommunication about instructions led to the drone crashing into the mud. Scott Taylor, a UAF undergrad working as a technician, says that constant drone repair
and upgrades are a central part of the job, one in which they try to involve the students as much as they can. “Last summer was a lot of fun because they would take them up and they would crash them, and then we would go back in and they would see us fixing them,” he says. “When possible, we would actually have them fix it.” As the program draws to a close, Monahan says that it has weathered every storm, both literally and figuratively. Students have clearly enjoyed the experience, evaluators have given it strong marks, and program leaders are working on a follow-up proposal to expand the program. “We’ve had a bunch of roadblocks and hurdles that we have gotten past,” he says. “We learned so much that we are rewriting and enlarging it and talking about taking it nationwide.”—Tom Moran