UAV Turbines, Inc., a pioneer of microturbine technology, has announced the inaugural flight of its Monarch 5 engine, a first-of-its-kind microturbine propulsion system.

Engineered to provide mid-sized commercial and military unmanned air vehicles (UAVs) with a reliable, efficient, safe, heavy-fuel propulsion system, the engine is designed to provide users with unmatched performance and ease of use. The Monarch 5 features a remote start, quiet operation, and long intervals between required maintenance.

Signifying the first time a small- to medium-sized drone has been powered by a turbine engine, the Monarch 5 microturbine engine was completely engineered by UAV Turbines’ team and custom-built, not merely modified from existing designs, to deliver maximum performance and new capabilities in multiple applications. Because Monarch 5 is a turbine engine it doesn’t need a large amount of cooling airflow, this enabled UAV Turbines to design a sleek cowling that actually reduces the airplane drag. The drag reduction is one of the turbine benefits that is not obvious from looking at a spec sheet but is realized when integrated on an airframe to provide superior performance and endurance. 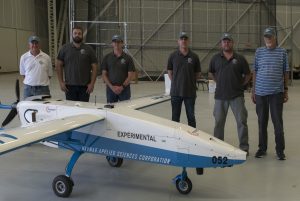