This past weekend, the New York City Drone Film Festival (#NYCDFF) played to a full house at the Directors Guild of America Theater on West 57th Street. The festival was organized by Randy Scott Slavin, a New York-based director and producer. RotorDrone had the opportunity to sit down with him and ask about the event. 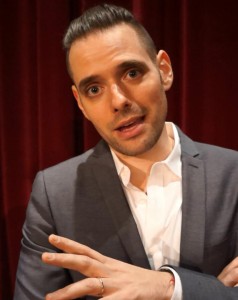 How did you first get started with rotor drones?
When I was a kid, I was into RC — I built RC cars and raced with them, so I had some background with the technology. But then, the first time I saw a video that was shot with a drone, I was mystified and stupefied and all of the other good ‘—ieds’ and I literally went out and bought a drone the next day.

Why did you decide to launch the New York City Drone Film Festival?
I made a film using drones called ‘Aerial NYC’ and it really went viral — it went all over the place! When I’ve had projects that catch on like that in the past, I always look around and find a festival to submit them to, but I couldn’t find one — so I decided to start one. I call it my ‘creative stupidity.’

Are you going to hold the festival again next year?
We’re absolutely going to be doing this again next year! We could have filled a 1,000-seat theater for this first one! Our sponsors have been amazing, and I think we’re going to see a tremendous surge in drone creativity moving forward. Now that we’ve got this showcase at a juried event, I think it’s only going to get better and better.