You’ve heard of a certain “ghostly” drone called “the iPhone of drones. “Well the team at xCraft are raising the bar by actually making an iPhone THE drone.  Actually not just iPhones, Android phones too. xCraft is changing the nature of drone tech and drone accessibility with the development of what will be simply known as the Phone Drone Ethos. For someone like me who geeks out on any kind of new smart phone accessory, this is the stuff of dreams.

The Phone Drone Ethos will be one of those products that creates a palm plant to the forehead followed by “why didn’t someone do this before.” The concept is simple, instead of using your smart phone as an interface to monitor your drone why not make your phone the drone itself. The tech to make that happen is not quite as simple, but that’s why xCraft employs some incredible wizards to create the alchemy that converts the basic functionalities of your phone into the brains of a drone. xCraft utilizes the GPS, hi-def camera and processing power of your smart phone as the brains and guts of a drone that just might double as a very sexy phone case. 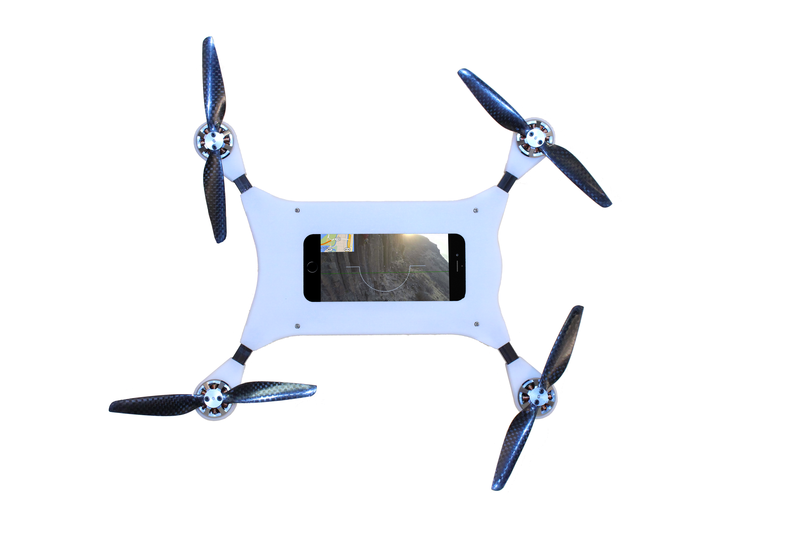 Don’t, however, mistake the Phone Drone as a simple smartphone accessory. This will be a seriously capable flying machine that, because of it’s integration with smart phones, will have functionality beyond most drones and  will be in a platform easily accessible to the masses. Open source API for app development means virtually unlimited possibilities for drone usage, and interfaces. Features found in only the most expensive drones will be easily obtained for free or nominal cost. Things such as apple watch integrations collision avoidance, advanced surveying and multi parameter autonomous flight just to name a few. The basic app will cover autonomous flight and mapping as well as  device pairing.

With smart phones’ inherent ability to communicate to each other (remember when phones were used only for communication) apps can be developed so drones can interact and fly together. Personally I can’t wait to be a part of my first drone flash mob with a swarm of drones dancing around while  compiling a surreal you tube or live streaming video. Swarm technology can have other more mundane uses too such as making area searches more efficient for rescue workers, multi-view monitoring for fire fighters. The fun and functional uses are virtually endless. All thanks to the vision of xCraft visionaries.

Though still in development, the Phone Drone Ethos definitely won’t be a drawing board queen left to die on the table for lack of  true interest or capital. Backed by the momentum of a growing kick starter campaign (https://www.kickstarter.com/projects/137596013/phonedrone-ethos-a-whole-new-dimension-for-your-sm) early adopters are showing their enthusiasm. If that doesn’t convince you that you’ll be seeing Phone Drones on the shelf soon. How about listening to the sharks. The Phone Dronecreated a feeding frenzy of legendary proportions on TV’s Shark Tank, the result of which was an unprecedented collaboration among ALL the sharks. How’s that for a stellar proof of concept. Be on the look out for a test and review article coming very soon and the public launch shortly there after. –Gordon Meehl