Aerial exploration of a gold rush ghost town
The folks at Monarch, Inc., and their precision multirotors have surveyed everything from agricultural crops to crime scenes and everything between. When a call came in from the California State Parks system asking if they could fly over a historic gold-mining ghost town to analyze its structures, they were ready to meet the challenge. We were thrilled to catch up with Monarch communications director Rebecca Lynch to find out more about this unique job experience. 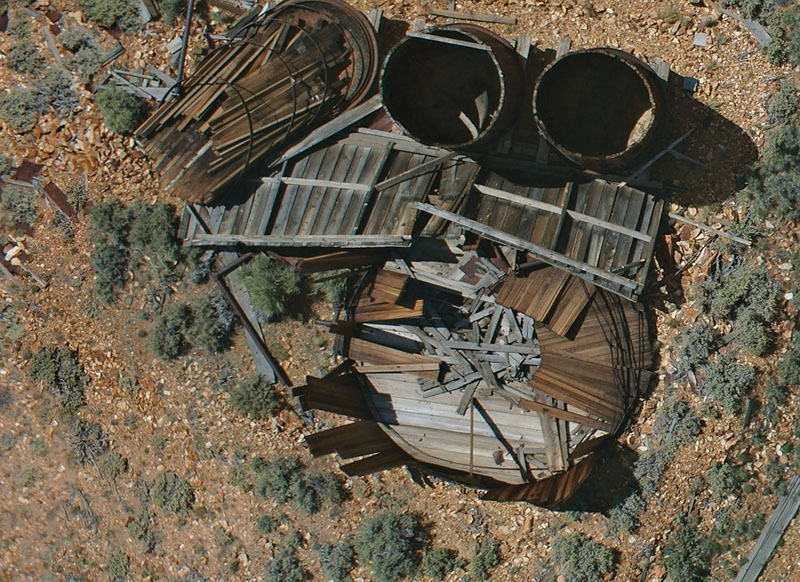 Bodie’s timber structures are feeling the effects of wind, drought, and age, leaving many in danger of imminent collapse. 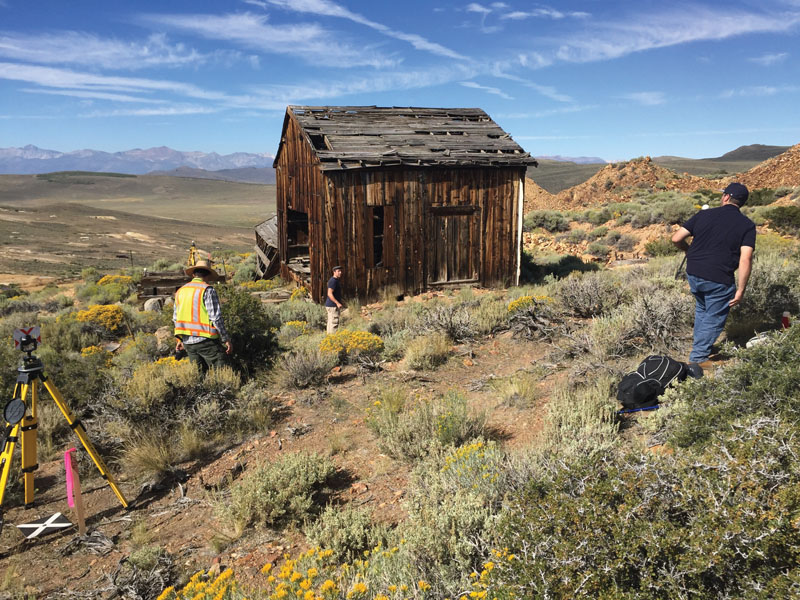 One such structure is the New Hoist, which park experts fear might not last the winter. Aerial views provide critical information about roofing and structural conditions and help preserve a record of each surveyed area for future analysis.

A Monarch operator prepares the UAV for flight. 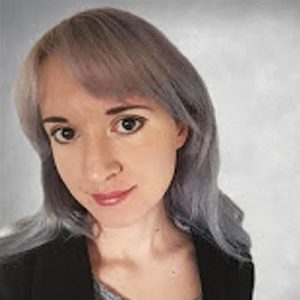 RotorDrone: Tell us a little about your recent survey over the historic town of Bodie.
Rebecca Lynch: Part of the California State Parks system, Bodie is an original California gold rush town. In its heyday during the 1880s, Bodie was a vibrant and volatile gem of the Wild West and is now kept in a state of “arrested decay.” The California State Parks system invited Monarch to aerially map Bodie using high-precision UAVs [unmanned aerial vehicles]. They had two main motivations in mind: to help preserve data about the historic town and its current condition, and to map and survey areas of special interest.
We approached the project in stages. The first stage involved mapping the Old Town area and New Hoist area, both of which have unique structures that the park wanted to analyze in detail. The beautiful Old Town features houses eerily preserved as if their inhabitants had just left, and keystones of everyday life in the mining town, like the General Store and Hotel. The New Hoist area is higher up the mountains but has some historically important structures relating to town history. The timber Bodie was built with has reached a certain age, and the harsh weather (the California droughts and, interestingly, the recent lack of high snowfall that used to help protect structures from wind during winter) have taken their toll—so many of the structures are reaching a critical state. The New Hoist area, in particular, has a structure that park authorities fear may not survive the winter. For this structure, we collaborated with the University of California, Merced, whose team 3D-scanned the inside and outside. The aerial data we provided was sharp enough to see individual nails on roofs—a trove of information to mine about the conditions of each building.
The second stage was interesting as the aerial mapping involved the survey of Bodie’s gravesites. Just outside the designated gravesite area, some
of the graves are marked but others are not, and forensic dogs were brought in to show where bodies might have been buried.
The various data sets were georectified using GPS markers and mapped into a 3D model using Pix4D, providing a very high-resolution “flythrough” model for the park to use. 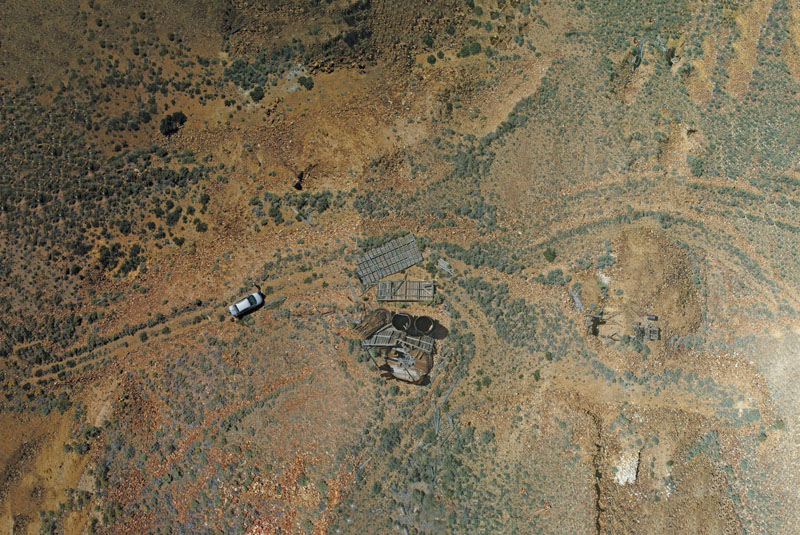 The aerial views provided by the Monarch UAV postprocessing with Pix4D software give an immense amount of detail—on the fly-through model, in some cases, right down to individual nails.

RD: Can you tell us a little about how you got involved with the park services for this project?
RL: Paul Veisze, geographic information officer for California State Parks, met Monarch’s CEO and founder Eileen Shibley at a conference on photogrammetry. Paul invited the Monarch team to Sacramento to complete some test flights. He was impressed
with the performance and data quality from the Monarch LS [survey drone], and asked us to return to map the park in the two stages above. 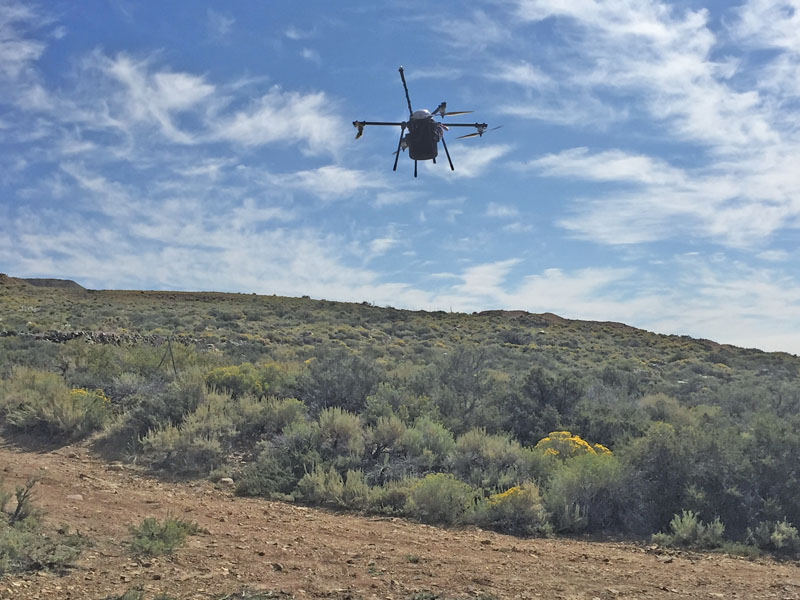 The Monarch drone is equipped with a 3D-printed gimbal for stability and multiple sensors in a Cocoon housing.

RD: What type of restriction was there on flying over a national historical site?
RL: There are different regulations around flying in California state parks, depending on which park you’re in. The flights took place under the guidelines of the Parks’ Certificate of Authorization (COA) naming Monarch, Inc., as the designated drone operator. COA is an authorization issued by the Federal Aviation Administration to a public operator for a specific UAS [unmanned aircraft systems] activity. In this case, Monarch applied jointly with the California State Parks system to get the permission, which is good for two years.

RD: What multirotor systems and cameras did you use, and what information are you looking to pull from the images that will help the park services?
RL: We used Monarch’s custom-built aerial survey quadcopter with a 3D-printed gimbal and trademarked Cocoon sensor housing, which allows multiple sensors to be used simultaneously. The gimbal allows for downward-facing imaging and counteracts the effects of wind, which is especially crucial in a very windy environment like that which we encountered at Bodie.
We work with our clients to understand what they’re looking for and plan our flights accordingly. The Parks is a perfect example, as they had a very defined data need. Paul provided additional advice, and we worked closely with him throughout. Postflight analysis with Pix4D software showed that the resolution we achieved was greater than 1cm per pixel. After processing in Pix4D, the Monarch team brought the orthomosaic and digital surface models into GIS [geographic information systems] software for visual analysis. While the photographic imagery mosaic was already placed very closely to the actual geolocation of the flight via geotagged photographs, verification of geographic and topographic alignment was done by pairing image indicators in the mosaic with corresponding coordinates of various ground control points provided by Paul. In the case of the gravesite survey, the very high-resolution imagery mosaics will help park experts to locate possible unmarked graves. For example, rock groupings and vegetation changes will be clearly visible. We also looked at the digital surface model for any obscure change in elevation. Several sites were identified for further research, and we were all quite happy with the results. 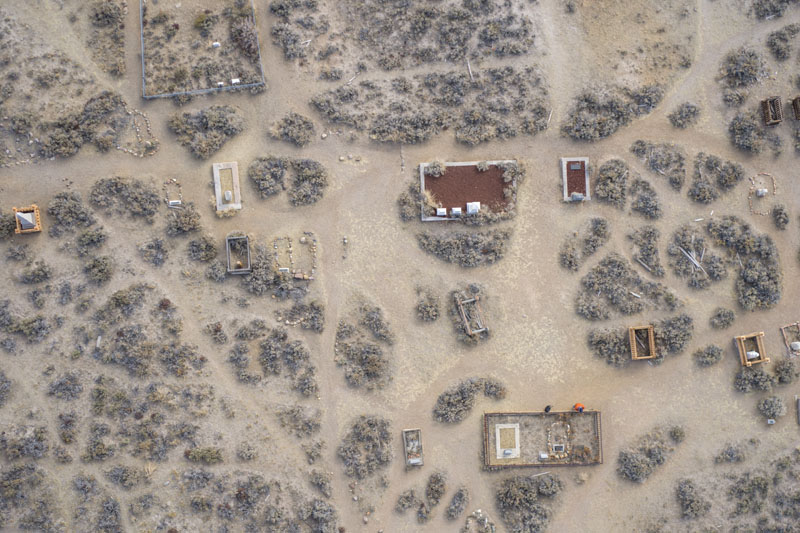 Evidence from forensic dogs pointed to some unmarked graves. The aerial views contain valuable information, such as the location of rock clusters and small elevation differences, that can help researchers look further.

RD: How long did it take to do a complete survey of the town?
RL: This project was a little more complex, as we had different goals at different locations and completed the survey in stages. The first stage required three flights over two days to map the Old Town and New Hoist areas.
For the second stage, which included the gravesite areas,
there were three separate plots of land, which totaled approximately 90 acres. The largest of the three was about 60 acres, and we split it into three flights of its own. This was done to maximize battery and photographic overlap but also because plot 1 included a hill roughly 30 to 40 meters taller than the elevation of the rest
of plot 1.

RD: What’s next on the horizon for Monarch?
RL: We undertake projects for a variety of clients, with a special focus on agriculture and inspection, so managing complex data needs and multiple plots is nothing new for us. We take pride in having the flexibility to meet challenging or unique flight requirements. But this project certainly had its own special challenges—we can’t say we’ve ever looked for gravesites by air before! We hope this will be the first of many other interesting projects, and with our 333 waiver, we’re partnering with surveyors and specialists so that our clients in these areas can benefit from the latest expert advice.