In January 2016, an action-packed web show appeared on YouTube aimed specifically at the burgeoning first person- view (FPV) multirotor community. But unlike earlier attempts, this one eschewed technical language, avoided instructional videos, and circumnavigated hobbyist clichés, opting instead for something a lot more exciting.
Taking cues from snowboarding and skating videos, it portrayed the wider social, cultural, and personality led gamut of the FPV scene: its codes, clothes, and
camaraderie. Rotor Riot had arrived. 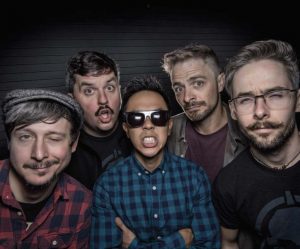 The faces of Rotor Riot: (left to right) Carlos Puertolas, aka Charpu; Kevin Dougherty, aka
Stingersswarm; Tommy Tibajia, aka UmmaGawd; Chad Nowak, aka FinalGlideAUS ; and Steele Davis, aka Mr Steele.

The Team
For producer Chad Kapper, Rotor Riot aspired to look beyond the technical aspects of multirotor flight. “It’s not so much about the mini quad itself but the mini quad pilots and their lifestyle,” he says. To ensure entertainment value, Kapper recruited five of the biggest personalities in the industry. Carlos Puertolas, better known as Charpu, was already one of the most fam ous pilots on the scene. His daring freestyle flights posted to YouTube inspired pilots all over the world, leading him to become known as the godfather of FPV. But it was more than just his flying skills that attracted Kapper. “Carlos is the quiet one,” explains fellow Rotor Riot pilot Chad Nowak, “but he’s probably the most entertaining. He’ll say one thing and it will have everyone in hysterics,” adding, “he could tell you a story about going to the grocery store and you would watch every second.” Nowak himself was propelled to FPV stardom when, in 2015, he became the world’s first drone-racing champion after picking up the top prize at the U.S. Drone Nationals in Sacramento, California. “Chad is the loudest,” says Kapper. “He takes risks without even realizing they are risks.” And Steele Davis, mustachioed with mischievous eyes, “is the most eclectic,” says Kapper. “He’s got this bad-boy rebel image and takes the biggest risks socially, but he’s got this great heart and just wants to fly and have a good time.” The final two pilots in the lineup, Tommy Tibajia and Kevin Dougherty, are renowned for their piloting skills. Tibajia, a sponsored pilot from California and DR1 runner-up, certainly has the skills to justify what Kapper calls, “the biggest risk taker with his quad.” And Dougherty, a commercial pilot, specializes in freestyle flight. “How I fly for work is very much focused on safety and consistency, but here I can try risky stuff and if I crash it’s only my wallet that hurts,” he explains. 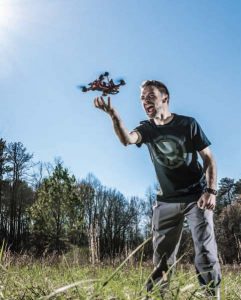 Diversity is important for Kapper. “It’s only through a hobby that you get this kind of eclectic mix, yet we all talk the same language.” And it’s from the on-camera interplay between these five diverse personalities and Kapper—whom they refer to affectionately as the “band manager”—that the magic of Rotor Riot and the essence of FPV multirotor culture emerges. “First of all, we get to hang out with friends and then we get to do what we love the most, which is to fly. On top of that, we get to record it and share it with people. It’s like living a dream,” explains Tibajia. Nowak adds, “Basically, we’re  recording what most people do when they go out flying with friends and having a good time. We’re trying to encase that in a show.”

YouTube Shows
The shows themselves, each 10 to 15 minutes long on average, are diverse and many stretch the definition of what most people do, but Rotor Riot sets out to inspire. From daring building dives to racing go-karts and from playing hide-and-seek in a mall to Star Wars racing, the action comes thick and fast.

One episode, World Balloon Pop, sees the team organize an impromptu balloon-popping competition on a beach in Hawaii. “We’re pleased to announce the first  successfully run, World Championship Balloon Popping Contest,” Nowak announces, although the low-fi event is more a product of converging circumstances than anything contrived. And that’s reflective of the scene at large. “Whether it’s a race or a group meetup, it’s always a social thing. We hang out and engage with one another in random ways,” explains Dougherty. It’s this aspect Rotor Riot is keen to preserve. As the FPV community heads toward competitive sports, says Kapper, the community side can get lost. “If there isn’t someone representing the community or lifestyle, the vacuum will most likely be filled with the best financial opportunity.”

In 3D Flying with Zoe FPV, the team learns how to fly 3D quads with Zoe Stumbaugh, the top American female freestyle pilot. In other episodes, the team soaks up the vibe at international competitions, including the World Drone Prix in Dubai, DR1, and MultiGP. In Drone Scavenger Hunt LA, the team is sent out onto the streets of Los Angeles to complete random tasks suggested by viewers. “Pop a helium-filled balloon before it disappears,” requests one; “slalom the pilings of Santa Monica pier,” asks another; “land on a cop car and take off again” is a third. All are attempted, along with many others, with varying degrees of success. Other times, it’s just about the team entertaining themselves. In Flying Ukulele Drone, they turn an ukulele into an FPV multirotor, trying to retain the playability of the instrument. “We’re always trying to top what we did the day before,” says Steele. Nowak agrees, “Most of us would get bored if we keep on doing the same thing.” Despite Nowak’s insistence that they have a three year itinerary planned, there appears little structure to the Rotor Riot working method. “We’re not organized,” he admits. “Often, it’s just a matter of being in the right place at the right time. You go out and fly, and only later realize that what you did was actually really cool,” says Dougherty. Other times, a whiff of a challenge can take the team to far-flung and unexpected places—sometimes, even, to a radioactive fallout zone. 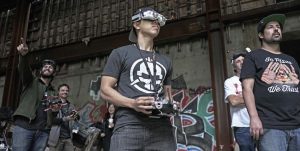 Fellow FPV crews often invite the Rotor Riot team to fly with them. For this episode, Tilt Squad Hotel, they join team Tilt Squad at an abandoned building in Orange County,  California.

FPV in an Abandoned City
In 2016, Steele was asked by a production company to name three places he’d like to fly. To keep things interesting he ambitiously suggested that he’d like to fly Yosemite Valley “because it’s illegal and I want to dive El Capitan”; the Great Wall of China “because it’s epic”; and Chernobyl, the Ukrainian site of the world’s biggest nuclear accident. When the production company admitted that it probably couldn’t get him to Ukraine, he found an alternative route. “The day they said ‘we can’t get you Chernobyl,’ I called Chad Kapper.” One of the benefits of the closely knit FPV community is that it is global and well connected. Drawing on that resource, Kapper put out requests on social media for assistance. The Ukrainian Association of Drone Racing was quick to respond, and the team was on its way.

The two-week trip saw the Rotor Riot crew travel to Pripyat, Ukraine, an abandoned workers’ town for the nearby Chernobyl nuclear-power station. Due to the Chernobyl disaster in 1986, more than 50,000 residents were evacuated from Pripyat, leaving a city eerily deserted—and a perfect playground for FPV pilots. Flying freestyle around the unoccupied, dilapidated buildings, the multirotor footage gives a soaring, detached, contextual view—highlighting the scale and remoteness of the area, outlining its proximity to nuclear disaster.

The Chernobyl experience left a lasting impression. “The people [in Ukraine] were so warm and generous, the food was amazing, and we went to these iconic locations,”
says Dougherty enthusiastically. At the end of one of the Chernobyl films, Kapper is caught on camera feeding a wild fox. “Moments like that are so surreal,” he says. “I’ve never even been that close to a fox, period, let alone a radioactive fox.” For Tibajia, aside from setting up one of his biggest challenges, it was what happened off camera that served a more meaningful purpose. “On the surface, it just looks like we went to Chernobyl and we went to some crazy places, and that was it. But behind the scenes, it was about helping out the local Ukrainian guys who were into FPV, helping their community. They were facing a lot of regulation issues, just like we are here in the U.S. By going there and making a video, we actually helped them in that regard.” For Kapper and the others, retaining that sense of community is paramount, but so too is staying relevant. “Everybody’s question is, ‘What’s next?’ But how do you top Chernobyl?”

No two locations are the same. Here, the Rotor Riot team take flight over “Sunken City” in San Pedro—abandoned ruins of seafront homes that fell victim to a landslide in 1929.

What’s Next
One thing for sure is that Rotor Riot is not short on ideas. “I’d love to go to Stonehenge, the Roman Coliseum, places like that,” says Tibajia. “I want to give people a new perspective they haven’t seen before.” Adds Steele, “We haven’t been to Asia.” And Nowak says, “I like the idea of flying the Great Wall of China.” (The Rotor Riot team are planning to visit there imminently.) There are ideas for new formats, too. “The documentary angle is something that we haven’t really played with,” says Kapper. “We’ve got more footage from Chernobyl and Ibiza, and—this is an experiment—we are working on a narrative action sequence in which the main characters are drones.” For Tibajia, it’s cultural exploration, as road-tested in Ukraine, that appeals. “I’d like to do an Anthony Bourdain [Parts Unknown] meets Top Gear but with drones,” he says. “You watch Bourdain and on the surface it’s just about food, but when you really start to watch, It’s actually telling stories, explaining history, and exploring culture. I’d like to show historical perspectives on things through the eyes of a drone—or a bird for that matter.”

Whatever happens next, you can bet there will be plenty more from the Rotor Riot team. “We’re a bunch of idiots flying toys on YouTube, going to exotic locations around the world, doing cool things that other people don’t get the chance to,” summarizes Nowak. “If that’s what you want to call a profession, then so be it. I’ll keep on doing that.”