Which program is right for you?

There are a lot of options when it comes to selecting your editing software. Choosing a software package is usually dependent on your choice of personal computer system. One of my favorites is Adobe Premiere Pro, but don’t feel that you have to use what everyone else is using. If the program that comes with your PC is sufficient for your needs, then stick with it. If you’re looking for a better way to tell your story, I’ll suggest a few different tools for you to consider. Today, the cost of entry has come down, so much that the same exact editing tools used by major motion pictures and television shows are now available to everyone for a very reasonable monthly charge. Most of these also have a free trial version available, so I encourage you to try it before you buy it.

Apple Final Cut Studio
There are two versions of this older software, and depending on which one you started with, you’ll probably hate the other. I use Final Cut Pro7 for a lot of my work, but that’s because it’s what I know best. The interface is intuitive and similar to other editing platforms, and it supports a huge amount of codecs on both import and export. The companion tools like the compressor make it really easy to publish files to most channels like YouTube and Blu-ray, and because it’s part of the Apple eco system, it works really well when sending projects over to other Apple applications for additional work like titling or scoring sound.
Available from Apple resellers ›  $299.99

Final Cut Pro X
There’s nothing faster on the market in my opinion for editing than Final Cut Pro X, but it takes some getting used to. It feels very counterintuitive but once you get familiar with the toolset you wonder what people were complaining about! If you’ve tried X in the past and written it off, do yourself a favor and give it another shot. It has come a long way and will quickly become a valuable asset in your video editing tool box.
itunes.apple.com  ›  $299.99 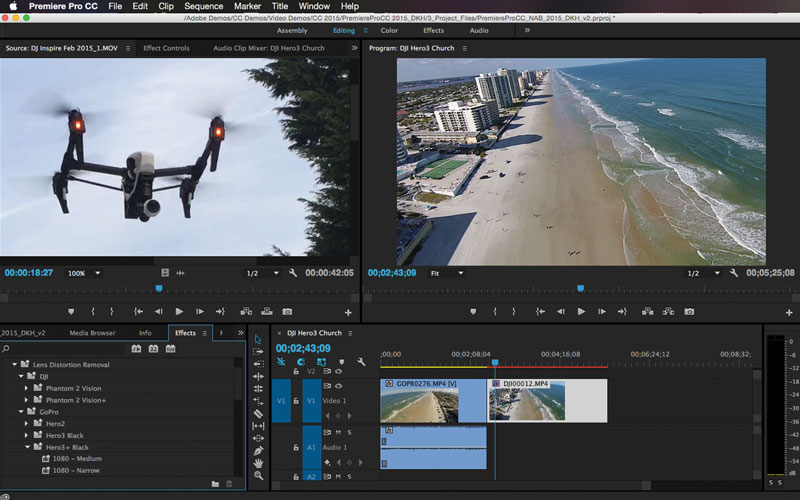 Adobe Premiere Pro offers a unique feature that helps fix some common issues such as image distortion commonly seen on GoPro or proprietary cameras that come with smaller drones like the DJI Phantom Vision and Vision 2+.

Adobe Premiere Pro
Adobe’s offering is very similar in layout to Final Cut Pro. Once you spend some time with it, you’ll quickly realize that not only do some editing platforms look the same, their core functionality is the same as well. I can’t think of any file type that I’ve imported into Premiere that it did not like. It even supports some files that have been orphaned from their original camera file directory system that other platforms are dependent on to read. Where Adobe really shines in its suite of products is how easy it is to bounce projects back and forth. If you’re at all serious about this industry, chances are you already have Photoshop and FX installed on your PC. Premier integrates with these applications brilliantly and you’ll soon be finding new efficiencies in your workflow. Premiere Pro should not be ignored.
creative.adobe.com  ›  Creative Cloud $49.99/month

Avid Media Composer
If I had to guess I would say that Avid is used on 95% of all broadcast and theatrical shows. 99% percent of the shows coming into my day job are cut on Avid. Media Composer offers you a very mature and battle tested application for your editorial needs. Some may complain that the interface was getting a bit dated, but for those like myself that have been using Avid for years, I appreciate the fact that Avid has continued to innovate its software without changing the familiar feel and workflow. If you plan on working in broadcast or theatrical in your career, you’d be doing yourself a huge disservice if you don’t learn Avid.
connect.avid.com  ›  $49.99/Month 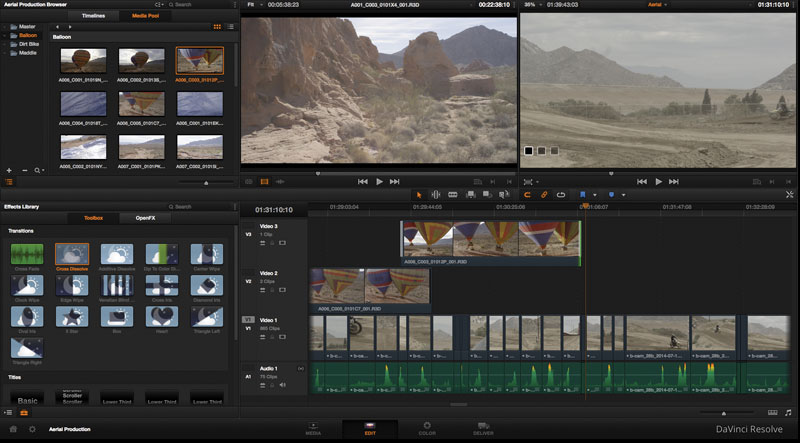 Most applications will allow you to customize your workspace to suit your needs. Select the view that works best for you. Dual displays offer the most flexibility to keep everything clean, but most applications offer a very well-thought-out, single-display option with minimal distractions.

Black Magic Design Da Vinci Resolve
Whether you know it or not, you’re familiar with the gorgeous results that Resolve has been producing for major motion pictures for years. It’s one of the dominating color correctors of choice and up until a few short years ago, was way out of the reach of most of us. That changed when Black Magic Design purchased Da Vinci Resolve and decided to make it one of the most controversial decisions in post-production history: they gave it away for free! It’s limited in what it can do in comparison to the fully licensed version, but not by much. You may wonder if I’ve made a mistake listing color corrector platform along with editing software, but the answer is no. Download it, load up some media and jump to the editing page; You’ll be greeted by some very powerful and familiar tools that will allow you to edit, title and deliver your project quickly. Resolve has some of the best support for native camera files from h.264 all the way up to R3D. Add this to your system. It’s available for Mac and Windows and at this price, you can’t go wrong with it.
blackmagicdesign.com  ›  free download

I hope this article gives you an appreciation of the various editing tools available. I strongly encourage you to give new programs a try; you may not know what you’re missing until you check them out!