There are many questions in the air about whether it is legal to fly commercially, even as the dust clears after the November 18, 2014 National Transportation Safety Board decision in Huerta v. Pirker. The Board reversed Raphael Pirker’s win against the FAA in early 2014 by finding that “model aircraft” are “aircraft” and must adhere to all Federal Aircraft Regulations manned aircraft have to follow. The Board ordered the administrative trial judge to conduct proceedings to determine whether Mr. Pirker’s alleged actions were in fact “careless or reckless.” As of this writing, it is not known whether Mr. Pirker and his attorney Brendan Schulman will further appeal his case. One issue the NTSB failed to directly address was the 2007 FAA ban on commercial sUAS operations. Did the FAA have the legal ability it asserted? A federal district court might say the FAA didn’t. For now, though, the FAA is emboldened after this latest NTSB decision to feel its commercial use ban is on even firmer legal ground. Fliers beware. 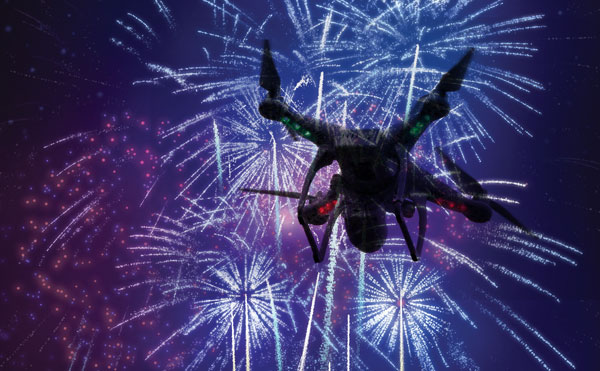 Many large fireworks are set up in “safe zones” established by the Coast Guard. While there is a question of whether that “zone” includes the air, setting down in that area has penalties of up to a $40,000 fine

Given these uncertainties, it is more important than ever to fly safely. But what does that mean? This article discusses several dos and don’ts hobbyists should follow. As for commercial operators, the author cannot condone commercial use in light of the latest NTSB decision. We are aware that many commercial operations are apparently continuing. To those folks we say, please fly safely and consult with a qualified attorney.

GENERAL PRINCIPLES
The FAA has issued guidelines for unmanned aerial vehicles for hobby and recreational flying. In general, an operator should keep his or her multirotor no higher than 400 feet above ground level, in visual line of sight, maintain a distance of at least 25 feet from people, wildlife, and buildings, only fly in conditions of good visibility, use a visual observer if possible, and contact the airport control tower if within 5 miles of an airport. In addition, consider joining the Academy of Model Aeronautics, which is an excellent resource for flying safely, but their liability insurance for hobbyists is one of the best deals on the planet. Finally, if you aren’t a hobbyist, you should determine whether applying for public Certificate of Waiver or Exemption or a Section 333 exemption is right for you.

DO consider the worst case scenario
Nobody intends for things to go wrong but that doesn’t mean they won’t. Plan for emergencies. What would you do if a dog or small child started running toward you or the multirotor? Have a place or two in mind where you can safely land in an emergency. What if a component or system fails? Don’t fly where the aircraft is likely to hit people or property. Many drones have emergency autopilot (“return to home”) functions if the control link is lost. Make sure the home point is actually set! Follow the user manual and update the firmware. From personal experience, it is wise to check your multirotor performance after the firmware is updated in a very safe location. Software glitches can and do occur.

DO know your operating limitations
Read the user manual. What is your drone’s maximum battery life? Keep a reserve of at least 20% or 25%. If you have 10 minutes of battery left, you shouldn’t fly away from you for more than probably 4 minutes (4 minutes there, 4 minutes back, 2 minutes reserve).
Similarly, know your personal limitations. Don’t overfly your abilities. The more experience you have flying, the better you will be able to control it in unfamiliar situations. Consider working with a more experienced pilot while developing your skills. AMA clubs can be a terrific source for instruction; go to modelaircraft.org for more information.

DO NOT fly into fireworks
Typing “drone + fireworks” into YouTube results in over 102,000 videos, many of which are stunning. However, attempting to capture your own video falls in the “don’t” category. Many large fireworks are set up in “safe zones” established by the Coast Guard. While there is a question of whether that “zone” includes the air, setting down in that area has penalties of up to a $40,000 fine, and if the landing was willful, it could be a felony punishable by at least five, but no more than 10 years imprisonment.
Additionally, fireworks have the possibility of hitting your drone, and could damage the device so that you couldn’t land it safely. To protect your investment in the drone and camera, you should enjoy the display from a distance.

DO NOT fly commercially
As discussed in “Legal View” in the Winter 2014 issue of RotorDrone, the FAA currently has a ban on commercial flight that may be in effect until late 2016 or early 2017. The only current legal workaround is to file a Section 333 petition and wait for approval.

DO NOT fly over accidents
Drones have been a great help to first responders — a firefighter in Connecticut reportedly helped put out an industrial fire with his personal multirotor — but as a civilian, the possibility of interfering with first responders or people who need critical medical care outweighs your interest in getting a video. An Ohio man faced charges for flying his personal drone over an accident site when it was alleged his flight interfered with a medical helicopter landing. Do not interfere with emergency operations.

DO NOT fly over a stadium event
In October, the FAA issued NOTAM FDC 5/3621 which prohibits flights within three miles of a stadium that holds 30,000 or more people during regular or post-season events, for example MLB, NFL, NCAA Division I Football games, and at NASCAR, Indy, and Champ races. Failing to abide by this “don’t” without express permission, could land you up to a year imprisonment and/or a hefty fine.

DO keep your distance from wildlife and people
According to the AMA, all pilots should avoid flying directly over unprotected people, vessels, vehicles or structures, and shall avoid endangerment of life and property of others. Flights shouldn’t be closer than 25 feet from any individual, except the pilot and assistants. Remember, people and wildlife can be unpredictable. If your flight causes an animal to become frightened or agitated, you might be held liable for any resulting injuries to people, to the animal itself, and property damage.

DO be courteous
Invading someone’s privacy with your multirotor may land you in hot water. But remember, merely the perception that you are invading someone’s privacy can cause trouble. Drones can make people uncomfortable. Last summer, a woman physically assaulted a drone operator after he flew his quadcopter over a public beach. As for the law itself, invasion of privacy in the context of sUAS is not settled law. President Obama has asked the National Telecommunications and Information Administration to draft commercial drone privacy regulations, but it may be a long while until they’re released. Like many cases in court, determining if an alleged action constituted an invasion of privacy may take going to trial. That’s not nearly as fun as flying, so remember an ounce of being courteous can avoid paying a pound for legal advice afterward. 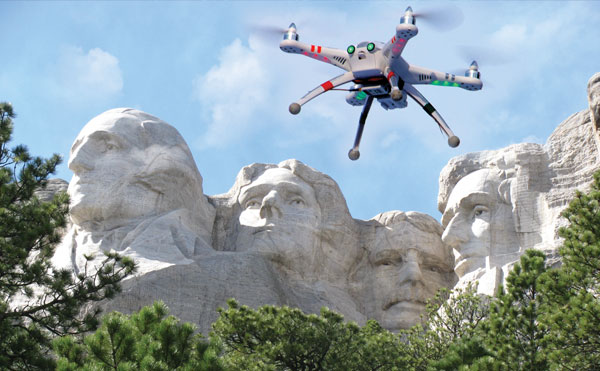 Park officials are concerned drone use will interfere with other people’s enjoyment of the parks and the safety of wildlife.

DO NOT fly at national parks
The use of drones by visitors to National Parks is currently prohibited. Park officials are concerned drone use will interfere with other people’s enjoyment of the parks and the safety of wildlife. National Park Service Director Jonathan B. Jarvis cited a sunset over the Grand Canyon “which was interrupted by a loud unmanned aircraft flying back and forth and eventually crashing in the canyon.” Violators face penalties of up to six months imprisonment and/or a fine of up to $5,000. Over the summer, a handful of individuals were fined under this rule. The parks have stated that, once safe rules have been developed, visitors may bring their drones back into the parks.

DO be aware of other laws
The FAA isn’t the only body that issues rules about flights. At least 17 states have enacted drone specific laws. Our firm keeps track of these laws, so visit our blog at dronelawsblog.com, but consider that other laws not specific to drones relating to privacy and trespassing may also apply.

Ed. Note: None of the above is considered legal advice. These are general guidelines only. For legal advice you should contact a lawyer to discuss the facts of your particular circumstances. Antonelli Law’s associate attorney Amelia Niemi assisted Jeffrey Antonelli with this article.