After two years of development in a secret location in Australia, Alauda is revealing its Airspeeder Mk 1. This new class of airborne racing vehicle is unlike anything that has been tried before. The world has been talking about flying cars for decades, and Alauda’s founder and CEO Matthew Pearson got tired of waiting. “It’s just time the world had flying cars,” he says. “Racing will push the technology like nothing else. It’s not enough to build the speeder—we have to build the sport. We want to bring the excitement and values of Formula 1 to the sky.”

The Mk 1 is the first iteration of Airspeeder, which has a simple lightweight design that was built with cost and performance in mind. The team members building the prototype man-carrying Airspeeder all have substantial RC drone and drone-racing experience, and they test concepts and design layouts with RC miniatures. The team members have joked that they’ve made small mistakes and big crashes along the way. This approach has allowed them to push the control and power systems to their limits, without fear of crashing their expensive aerial frame. 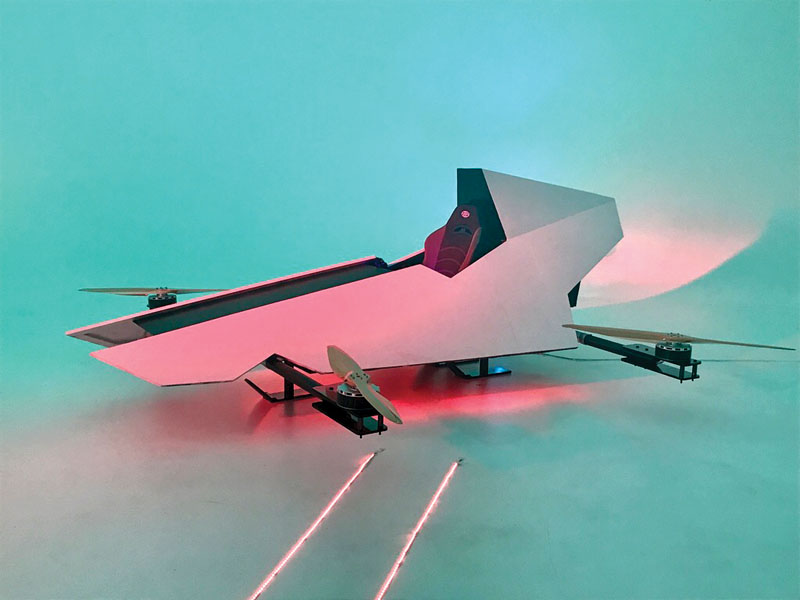 This initial mock-up was used to work out the design layout.

Designed to use four custom-manufactured 50-megawatt motors and powered by the same cells used in a Tesla Model S power system, the Mk 1 will use robotics and sensors to ensure the drivers’ (pilots’) safety while they control the high-performance electric aircraft. Pearson adds, “We have sky-high ambitions. We have the prototype, we have the technology, we have the team—and we’re taking it to the next level.”

The first race, projected to take place in 2020, will include two Air­speeders. Initially, the race will be flown unmanned, piloted remotely from virtual cockpits. In future races, the speeders will become manned and conform to all aerial safety regulations.—Team RotorDrone