Behind the scenes at Go Professional Cases

Go Professional Cases (GPC) has been part of the rotor-drone revolution from the very beginning. I know because I was there, at the fabled Multirotor Challenge at Palomar RC Flyers’ field in Fallbrook, California, in March 2013. That was where I first met Rick and Beth Bohlman, who founded GPC after doing a favor for a family member that turned into a business opportunity they never imagined. 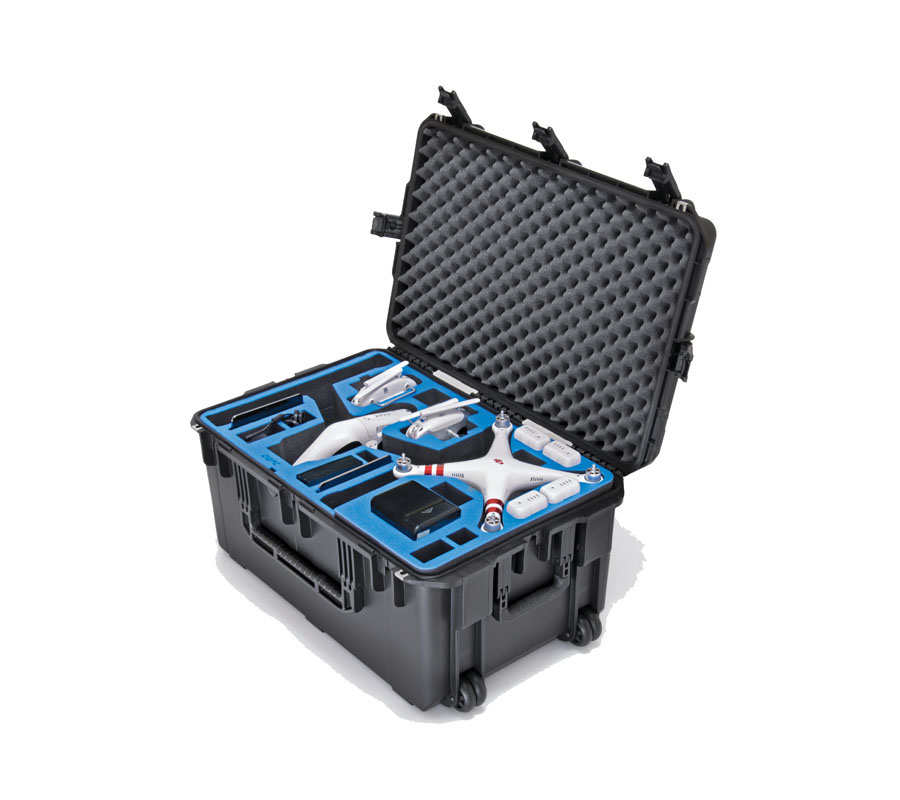 This case is among the innovative designs developed by GPC, capable of carrying both an Inspire 1 and a Phantom. The company developed the concept after listening to its customers, who reported regularly traveling with both aircraft—as a primary and a backup.

“My brother bought a GoPro camera at Costco, and he’s a pilot,” Rick recalled. “He always likes to take care of his stuff, so he came by my office with the camera and asked if I could make a case for it.”
Although GPC got its start in 2011, Rick and Beth have been in the case business for more than 20 years. Their original company, Caseman—still in business today and still being run by the couple—manufactures cases for military and industrial users.
After making the original GoPro case for his brother, Rick had a thought: “Since I had already put together the design, I’ll go ahead and advertise it. It caught on, and people started buying those, and then I started getting requests for a case to hold two cameras, then three, then 12—and it just took off from there.” 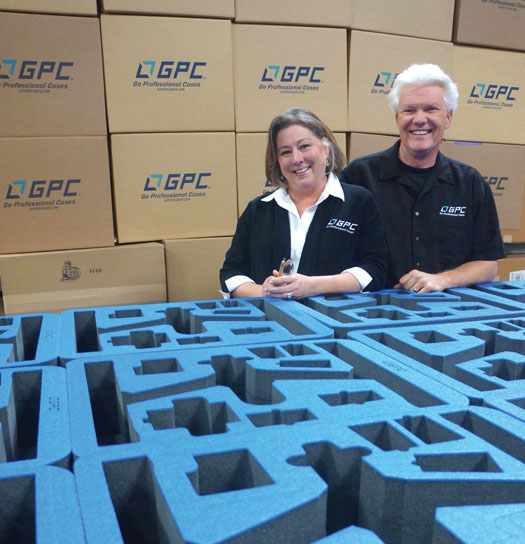 The Phantom Menace
It was still the early days in the evolution of drones as we’ve come to know them today. At the same time this was happening, here at the Roswell Flight Test Crew, we were upgrading the MultiWii flight controller on our home-built flagship hexacopter, RQCX-3 “Raven,” using a promising new system with a funny name: the “NAZA,” sold by a company out of China called DJI. 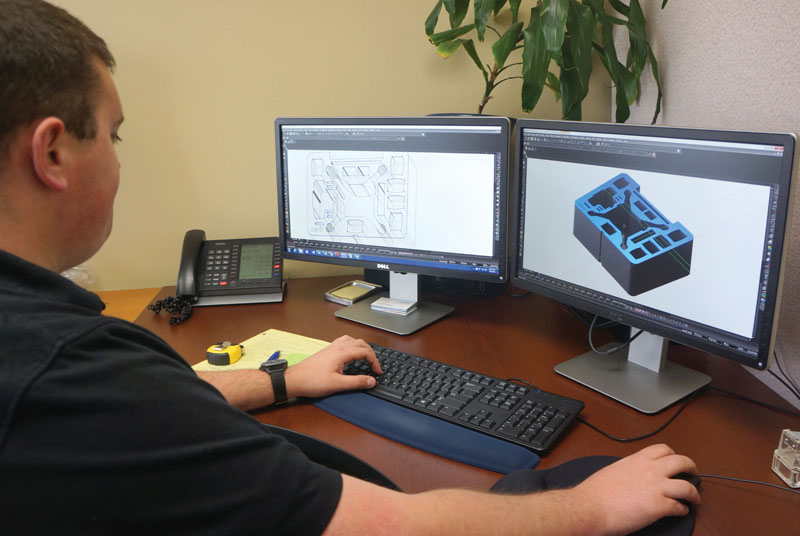 Headquartered in San Diego, California, GPC shares a building with its sibling company, Caseman—doing business for more than two decades in the military and industrial sectors.

Back then, if you wanted to record high-definition video in the air, GoPro was really the first and only choice—which is why the original DJI Phantom, released in January 2013, came with a mount for the GoPro Hero as standard equipment. This fact led to another unlikely connection, steering Rick and Beth toward their destiny.
“We had a guy who had purchased one of our GoPro camera cases, and he got in touch with us and asked if we made a case for the Phantom,” Rick said. “I didn’t know what that was, so I started looking around on the Internet.”
His search led him to Wattflyer, which, in turn, led him to Jim Bonnardel of the Silent Electric Flyers of San Diego, California, where GPC is based.
“A few hours later, Jim came running through my door, holding a Phantom,” said Rick.
Rick made the requisite measurements and designed a case to accommodate the now-famous flying white object.
“As soon as we made that case, things really started to snowball,” he recalled. “Right off the bat, I put together cases for the TBS Discovery, the Cinestar 8, the SkyJib, and the DJI Flamewheel series, which was the predecessor to the Phantom and still very popular back then.”
Another coincidence served to cement GPC’s place as the leader in the market for custom-built cases for rotor drones.
“3D Robotics has their San Diego headquarters only about a mile down the road from us, and there was a guy working with them who had done some business with us through Caseman. So when they needed some cases for their early prototypes, they reached out to us,” Rick said. “Then, when the Iris came along, we developed a custom case for that, and we’ve been joined at the hip with them ever since.” 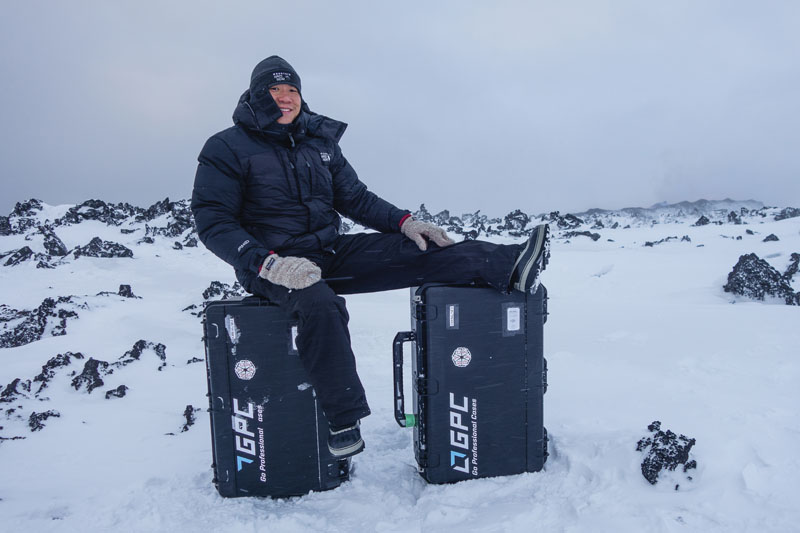 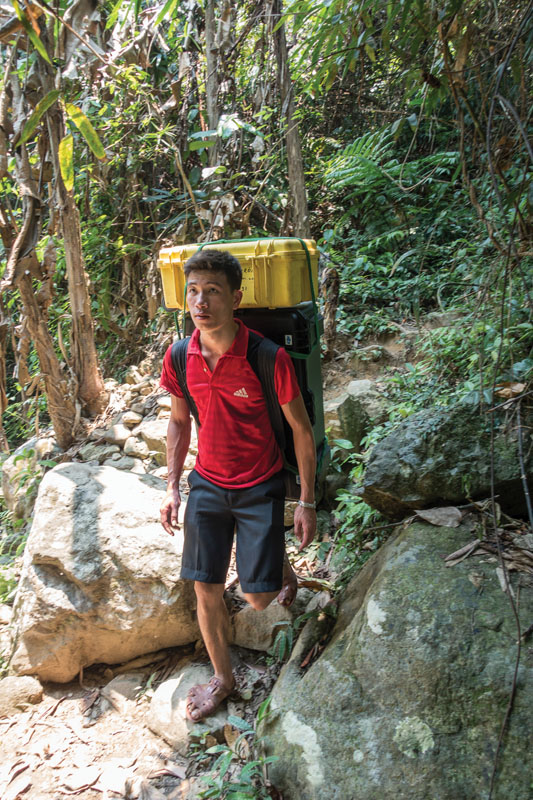 A porter carries DJI drones protected inside GPC cases deep into the jungle of Vietnam for Romeo Durscher’s groundbreaking expedition to the Son Doong Cave. (Photo courtesy of Romeo Durscher) 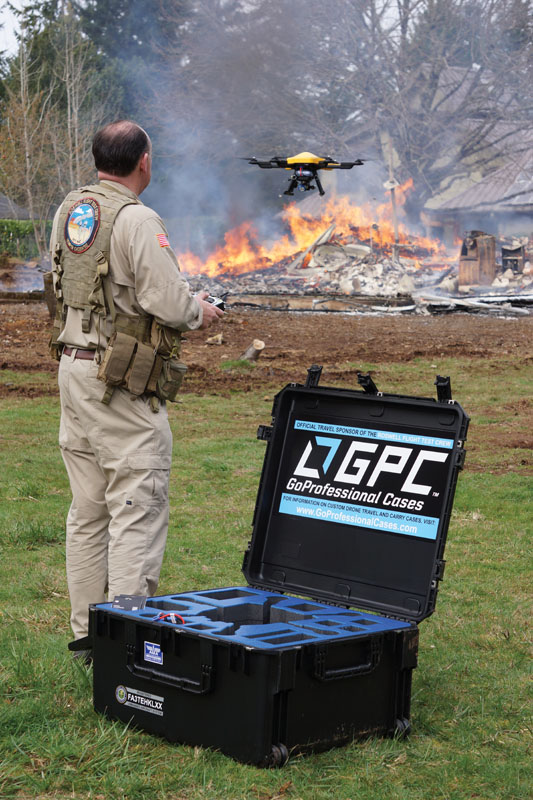 The Roswell Flight Test Crew deploys a rotor drone equipped with a FLIR thermal-imaging camera at the scene of a structure fire that completely destroyed a home in rural Clackamas County, Oregon.

The process of designing a case for a new drone begins with a series of precise measurements in three dimensions to determine how it will fit inside the protective foam cushion that will surround it. There are three different means of deriving these measurements.
“The company that is manufacturing the drones can share their computer-aided design (CAD) drawings with us, which makes it easy,” Rick explained. “Alternatively, they provide us with a nonfunctioning shell of the aircraft or even a working prototype.
“If neither of those are a possibility, we work from photographs of the drone—but that can be tricky because of parallax, which can make it difficult to judge the exact size of the different components.”
It’s tricky, to be sure, but I’ve seen it work myself. GPC designed a custom carrying case for RQCX-3 “Raven”—as awkward and gangly a shape as you could ever hope to see—and as a unique and fragile artifact, the best we could do was send photographs.
When the case arrived, Raven slipped inside like it was a bespoke suit from a tailor on Savile Row.
“Once we’ve got the measurements, we evaluate the drone as to where and how it needs to be supported and protected,” said Rick. “Will it be resting on its arms or just the ends of the arms where the motors are mounted? Or will it rest on the landing gear?
“After that, we figure out how the radio and the accessories are going to fit. We try to organize the case in a logical manner, so that like parts are grouped together. We also look at the drone’s intended user. If it’s a weekend warrior, they may only need space for a couple of batteries. But if it’s a professional aerial cinema rig that’s meant to be a workhorse, they could be out shooting all day, so they’re going to need a lot of batteries.”
When the top-down 2D layout is complete, a production engineer figures out how many layers of foam will be needed, and the most efficient, cost-effective way to cut them. The foam—including the signature GPC blue top—is then cut using a water-jet system, and the individual layers are stacked up like a wedding cake and glued together.

“We use really high-quality foam, so it has a better ability to retain its shape over time,” Rick said. “Lesser-quality foam tends to deteriorate over time, so your aircraft and your accessories can start flopping around inside the case.”
For Beth, good design and quality materials do more than protect the drone. They also offer a testament to the professionalism of its user.
“We hear back from people all the time who make their living with drones, and the one message we get consistently is the impression our products make on their customers,” she said. “It’s like putting on a nice suit when you go to a job interview.
“If your gear is well organized, people are going to assume that you are well organized. If you’re carrying everything around in plastic bags, you’re not making a good first impression.” 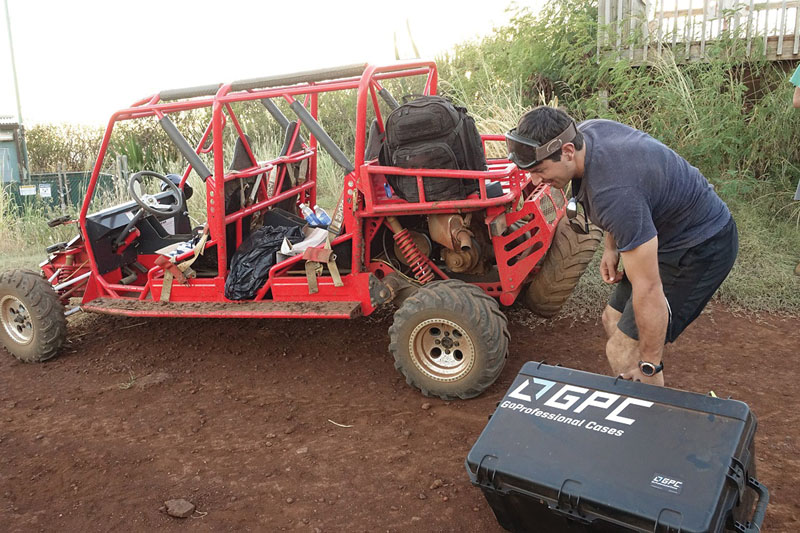 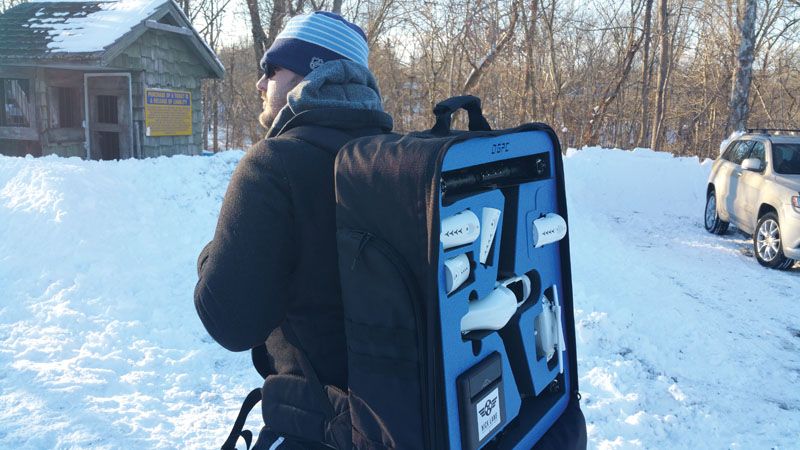 Based in Philadelphia, Pennsylvania, aerial cinematographer Nick Lang was among those GPC users invited to test the company’s new custom backpack for the DJI Inspire 1. In response to requests from customers who needed to haul the DJI Inspire 1 into remote locations, GPC designed a custom backpack that features plates of G10 fiberglass to create a light, sturdy bag that retains its shape and provides ample protection for the aircraft.

Part of the Community
Having grown up in the drone community, it’s no surprise that GPC remains a part of it. The company enjoys close working relationships with the major manufacturers—DJI, 3D Robotics, and Yuneec—to the point that GPC’s input has affected aircraft design.
“DJI brought us in to take an early look at the Inspire 1, and right away, I realized that trying to fit it into a case in landing mode was going to take up a huge amount of space,” said Rick.
At his suggestion, DJI updated the aircraft’s firmware to provide a flat “transport” mode so that it could travel inside a case small enough to be checked as standard luggage on a commercial airline flight.
Here at the Roswell Flight Test Crew, GPC has long been our official travel sponsor—making it possible for us to conduct our outreach and training activities across the United States as well as to provide show-floor coverage from major industry events.
GPC has also supported other drone teams conducting humanitarian and educational efforts, such as responding to the Nepal earthquake or helping the Boys & Girls Clubs teach students about STEM (science, technology, engineering, and math) subjects.
“It’s really fun being part of a growing industry,” said Rick. “Coming out of the corporate world—where you’re talking to ‘robots’ on the other end of the phone, who are just trying to grind you down and get the lowest price possible—it’s nice to work with people who appreciate attention to detail and craftsmanship.
“The most exciting thing is that we’re still right at the starting point of this new industry—where the cell phone was 25 years ago or where the computer was 40 years ago. We feel extremely fortunate to be working with the people who are developing these new products and to have them value our input.”