I never considered the Czech Republic as a travel destination when searching for new and exciting places to visit. Yet, when my girlfriend decided she wanted to celebrate a big birthday on a National Geographic Vienna to Prague Hiking Adventure trip through the Czech Republic, I was amenable. Little did I realize the trip would turn out fascinating, combining history, nature and enchanting architecture together with memorable photographs.

Along with my Canon DSLR camera, Sony RX100 IV point and shoot camera and a DJI Osmo Pocket video camera, I was especially excited to use my DJI Mavic 2 Pro drone for aerial photography. That desire became reality on the third day in the small town of Mikulov in the South Moravia region of the Czech Republic.

When we arrived in town during the late afternoon, I made sure to scout locations for the following morning’s aerial shoot. My goal was to capture the impressive Mikulov Castle, perched on a hill near the center of town, along with the Church of St. Wenceslas and an old watchtower. A possible issue at sunrise was a large hill to the east of town. I was unsure whether the sun would rise behind the hill and block the early morning light or if the sun would rise just to the south of the hill and bathe the scene with soft light. As it turned out, neither the sun nor the hill was a concern.

The next day I headed out before dawn searching for an elevated location where I could see both the castle and drone while flying. I found a bus stop with a bench and grassy area along a ridge a few blocks from the hotel. Sometime before sunrise, I launched the drone and flew towards the castle. The scene was very muted, with the colorful foreground buildings and homes in a dreamy pastel of soft light. With the sky behind the castle a subtle shade of pink and light blue, the entire landscape evoked a feeling of calmness and serenity.

For the next 25 minutes, I photographed from various perspectives and heights as the sun lit the surrounding landscape and part of the castle tower. My favorite photo from the morning, however, turned out to be that very first one. 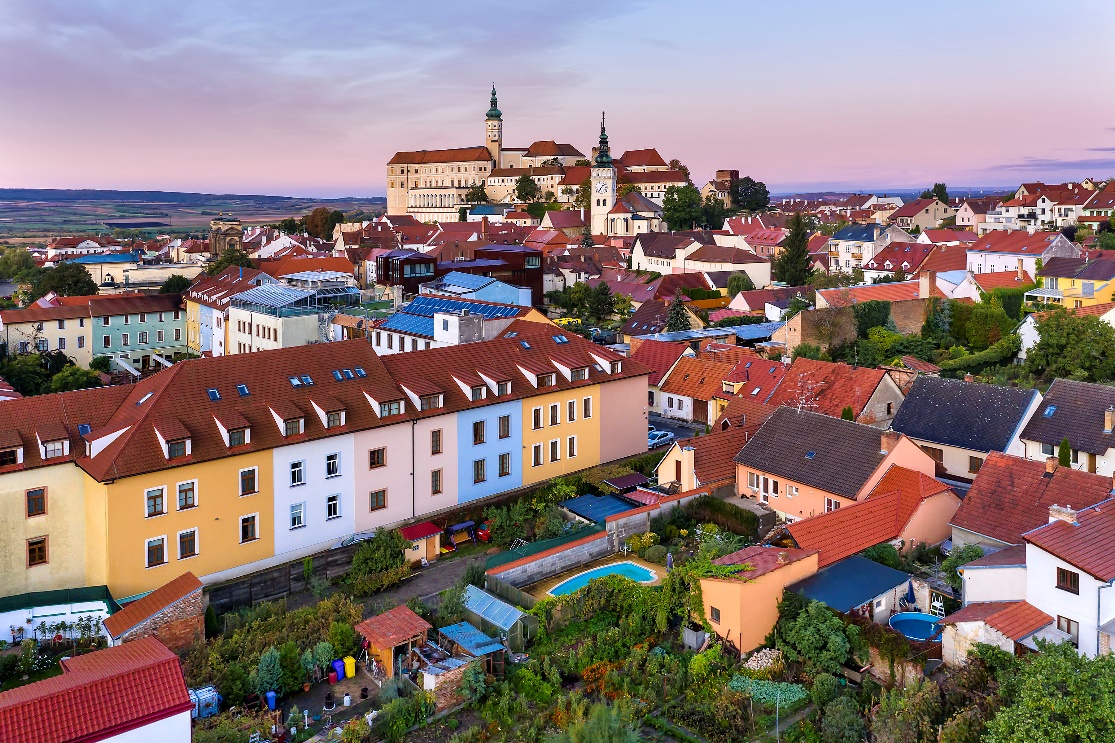 My next flight a day later turned out to be more of an adventure than I anticipated. Often on National Geographic trips, the guides like to get photos of the participants with the Nat Geo flag. One of our guides, Petr, loved the idea of a drone selfie with the National Geographic flag instead of the usual ground level photo. He had a particular location in mind, near the city of Čížov, where remnants of the Iron Curtain still stood. His plan was to place the flag between the two preserved barbed wire fences that marked the curtain’s border and photograph the group as we lay around the flag. As Petr unfurled the flag, I decided to launch the drone on the road near the fence. Just then a truck passed us and stopped abruptly. Immediately a man emerged and started admonishing me in Czech. I deferred to our guides who informed me that the area was a restrictive site, and if I flew the drone, I would be arrested. I immediately turned off the drone and started to pack up. Then his tone seemed to soften as he continued talking with the guides. I was then told an acceptable location would be to fly on the other side of the fence and gravel road which eventually led to the watchtower in the distance in this non-restrictive zone.

With our new plan in place, Petr positioned the flag in a grassy area where all of us could lay in a circle around the flag while I flew the drone to capture both our group as well as the barbed wire fences and barriers behind us. I quickly snapped several photos before landing, not wanting to incur any more wrath, and we proceeded on our hike past the remnants and into the forest. 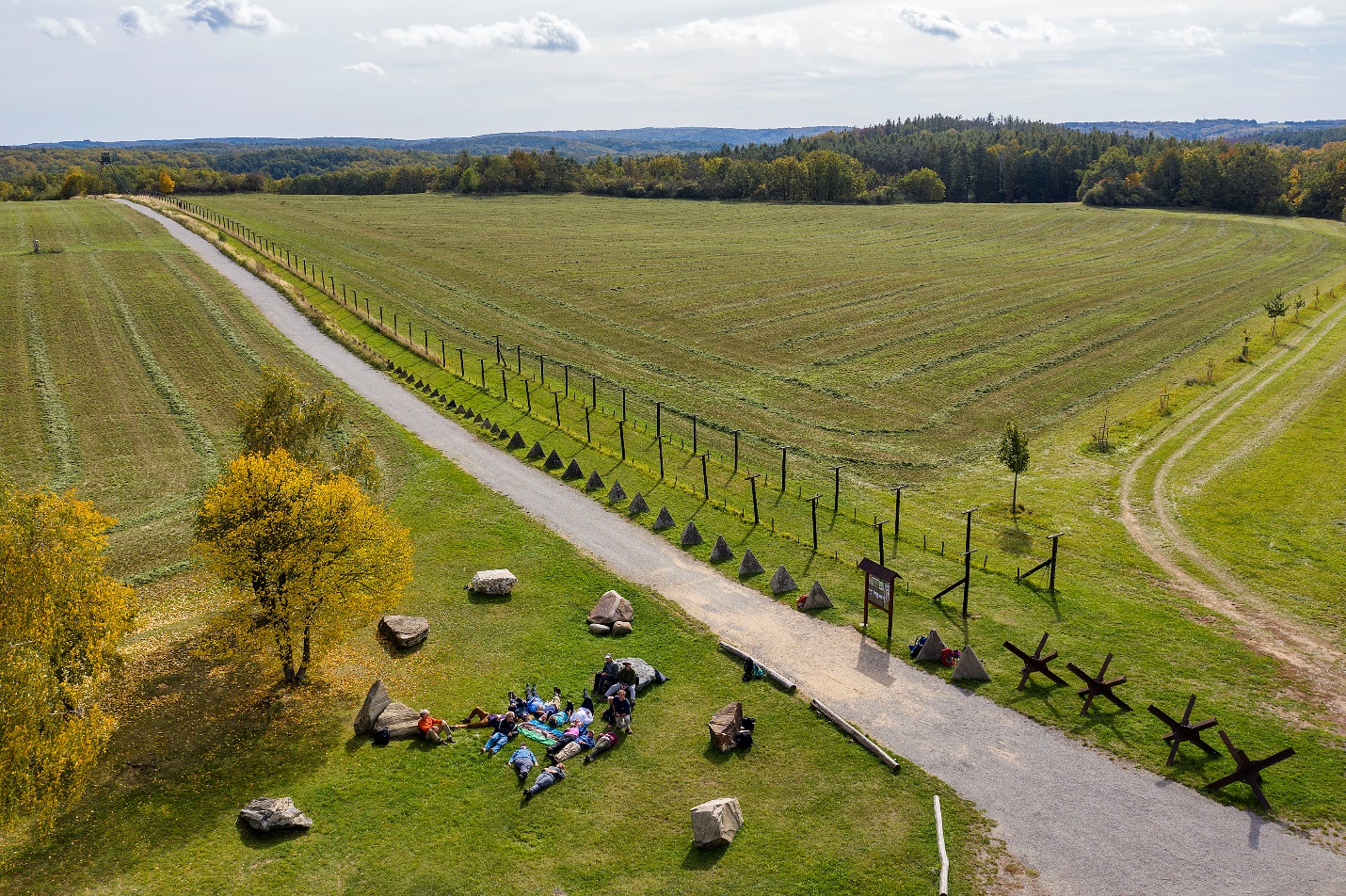 In the small town of Telc, a charming Czech Republic UNESCO World Heritage site in Southern Moravia, I assembled a small group of fellow photographers and sightseers from our tour for an early morning shoot to photograph its beautiful castle towers and chateau with water reflections that I had discovered in an online search prior to the trip. From Google’s satellite view, I knew the best location was either from a pedestrian bridge over the lake or from a road farther away. A helpful hotel employee confirmed the location after I showed him the desired photo and even gave me specific instructions on how to find the bridge from the hotel.

We headed out before dawn and walked through the town square to the bridge that overlooked the lake and chateau. The morning was cold and clear, with no breeze whatsoever. As we set up our equipment on the bridge, ducks began to swim toward us, disrupting the calm water and reflections but also creating a nice “v” in the water behind them.

The chateau’s reflections in the water appeared prominently in the pre-dawn morning. A slight mist accented the already peaceful scene. We photographed from different angles on the bridge while waiting for the sun to rise above the horizon behind us. I then decided to launch the drone. At first, I hovered the Mavic just above the bridge, trying to keep the reflections of the chateau in view. I eventually increased the altitude which revealed a thin layer of fog in the hills beyond the castle. Every perspective revealed new elements that added to the scene. I exhausted the battery while flying around the area, first photographing the chateau and lakes and eventually including the town square in the photos.

After landing on the bridge to change batteries, I lifted off just as the first rays of sunlight hit the towers of the chateau, and I photographed from different heights and angles. Within a few minutes, the sun rose high enough to light the bridge. Flying backwards at a low altitude to bring the bridge into view, I looked at the controller’s monitor and marveled: the foreground bridge with the chateau’s reflection and the buildings and towers in the distance, coupled with the early morning light on the willow trees that lined the left bank of the lake, turned out to be my favorite photograph from a very successful morning shoot. 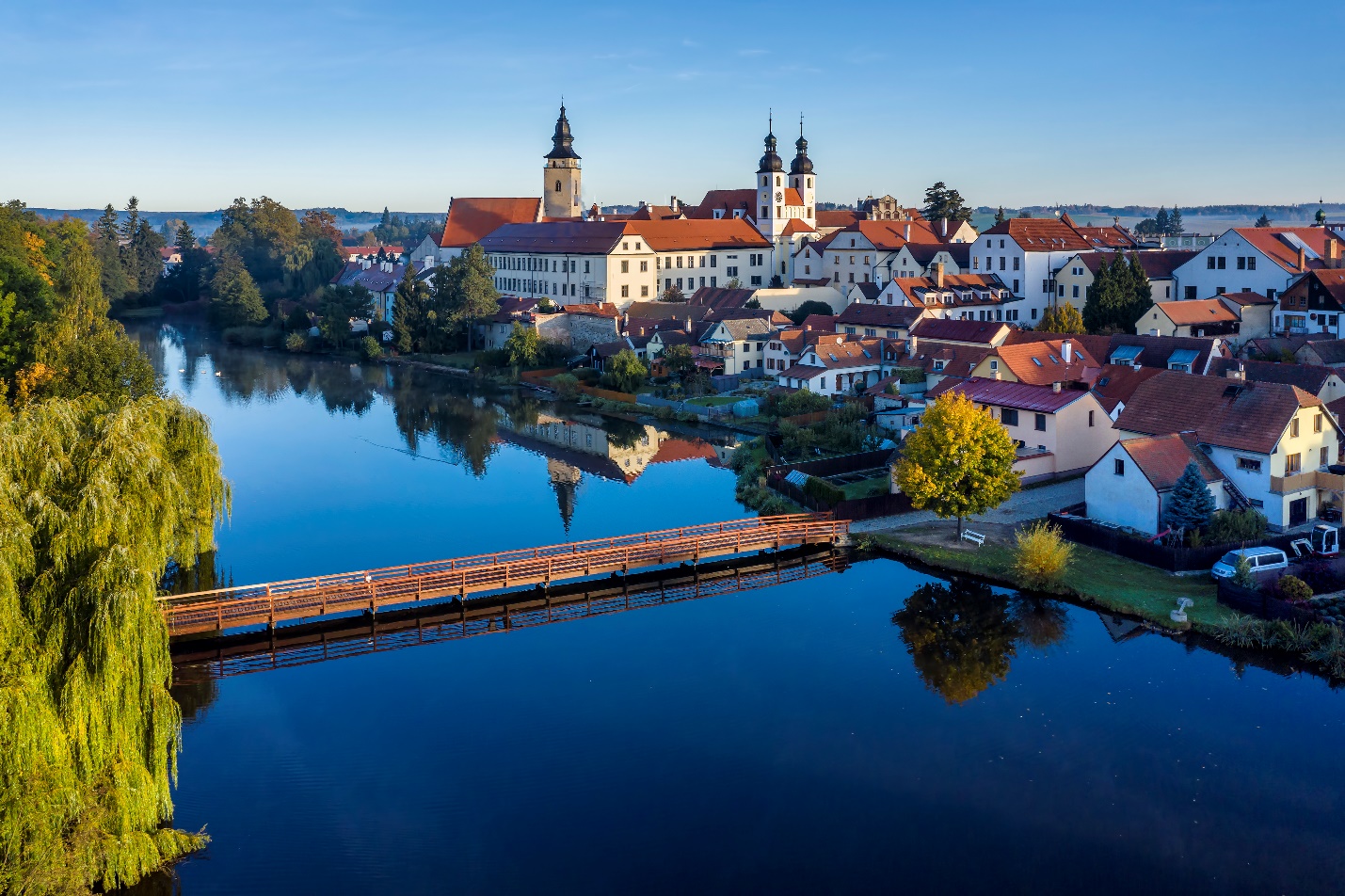 Cesky Krumlov, in the southern Bohemia region of the Czech Republic, is one of the most picturesque towns in Europe. Its old town is a UNESCO-designated World Heritage Site, and the town is encircled by the Vltava River below an impressive 13th century castle. The narrow cobblestone streets, renaissance and baroque architecture and captivating town square only added to the charm.

We arrived in the late afternoon, and I immediately sought an area just outside of town to fly as the sun neared the hills to the west. Rising upward, I surveyed the scene. Although golden light filled the town and surrounding hills, surprisingly, no scene struck me as exceptional. Still, I snapped several photos from different locations and heights.

Early the following morning, I found a grassy area near the outside walls of the castle and lifted off just as the sun peeked over the eastern hills. Soon, the city’s towers and rolling hills to the west were enveloped in beautiful light. Low lying fog in a distant valley added a pleasing component to the landscape.

My favorite photo turned out to be one of the last, a low altitude perspective highlighting the sunlit foreground trees, the castle walls and tower and the valley in the distance. 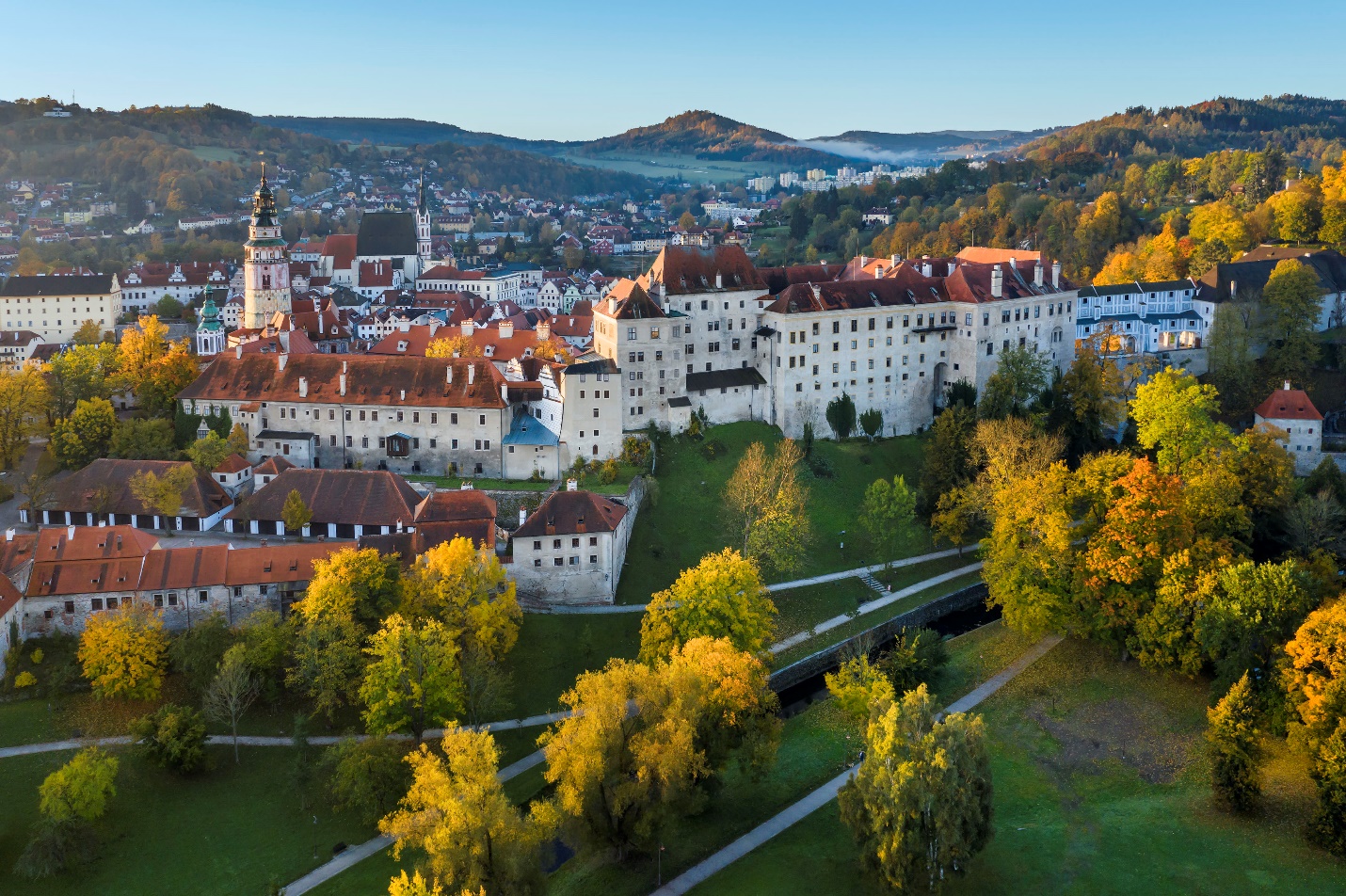 Extensive research proved extremely beneficial in scouting out potential locations before the trip. I scoured images of every town on our itinerary, looking for interesting sites and perspectives. If an image moved me, I checked out Google Satellite view and even street view if applicable. Talking to the guides and hotel clerks supplemented my research when trying to discover specific areas to photograph. Finally, walking around the area both before and especially after dinner not only provided specific locations to visit the next morning but added to the enjoyment of experiencing the atmosphere of each town without people.

Hiking and photographing the quaint towns and countryside of the Czech Republic turned out to be a wonderful experience. Adding a fabulous drone like the Mavic 2 Pro to my photographic arsenal was truly a game changer.