Situational awareness is key to safe and successful flights

On June 30, 1956, the first major midair collision in our nation’s history occurred over Grand Canyon National Park. On a clear day, a TWA Super Constellation and a United Airlines DC-7 collided in uncontrolled airspace, causing 128 fatalities. The deadliest U.S. commercial-airline disaster ever, this accident prompted Congress to pass the Federal Aviation Act of 1958 and create the Federal Aviation Administration (FAA). The FAA is the national aviation authority responsible for regulating all aircraft operations and allocating the use of airspace within the United States. (As a reminder, drones are legally defined as aircraft, and their operation is subject to regulation by the FAA.)

The National Airspace System (NAS) includes all the airspace, navigation facilities, and airports in the United States and is shared by civilian and military aircraft. It is one of the most complex aviation systems in the world. Historically, the phrase “U.S. Airspace” has been depicted on printed aeronautical charts used by pilots for navigation. Current aeronautical charts are now available online and may be viewed at skyvector.com. There are various ways of obtaining airspace information, and we’ll get into those later.

Types of National Airspace
Knowing the types and locations of airspace before flying your drone as well as complying with FAA regulations are critical to flight safety. It is important to know the FAA may designate or change the airspace at any time due to an emergency or security situation. It is essential to know what types of operations are restricted and permitted before you fly a drone in the national airspace.

Recreational drone pilots are required to know the type of airspace in which they plan to fly. Perhaps the most utilized app in this regard is B4UFLY, which has been developed in conjunction with the FAA. B4UFLY provides recreational drone pilots with a status indicator based on their current or planned location in relation to airspace restrictions. The status indicators inform the user if drone flying is prohibited and requires certain actions, or if there are no current FAA restrictions (other than flying safely). There may be additional restrictions, such as state and local regulations, that are not shown on the B4UFLY app.

Drone pilots with Part 107 certification are required to learn and understand much more about operations within the national airspace. A major part of the FAA knowledge test for remote pilot certification covers airspace infor­mation. There are a variety of apps available for Part 107 drone pilots, including AirMap and Skyward. AirMap gives drone pilots the option to request authorization to fly in controlled airspace under the new automated system called “low-altitude authorization and notifi­cation capability” (LAANC). LAANC will be explained in more detail in an upcoming article.

There are four types of airspace within the NAS: controlled, uncontrolled, special use, and other areas. 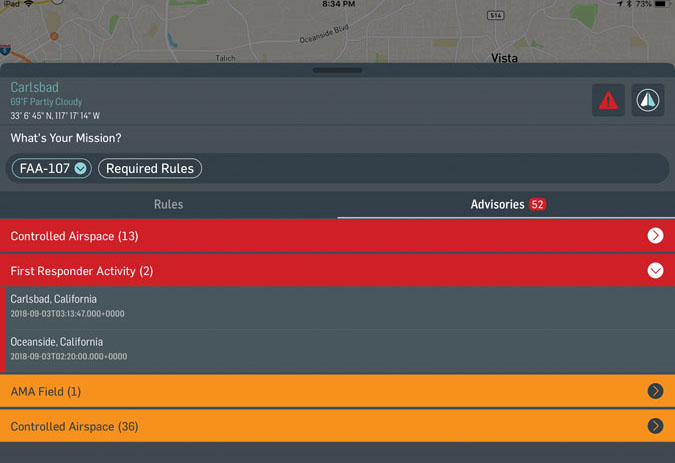 Advisory screen for drone operators in San Diego County for a specific date and time.

• Class A airspace extends from 18,000 feet to 60,000 feet above mean sea level (MSL) and is pri­marily used by airliners traveling between major cities. Small drones are limited to flying at an altitude of 400 feet above ground level (AGL). They don’t have the capability of reaching Class A airspace.

• Class B airspace extends from the surface to 10,000 feet above MSL. Class B surrounds the nation’s busiest airports in cities like New York, Chicago, and Los Angeles. The layout of each Class B airspace area consists of an inner-core surface area and two or more upper layers resembling an upside-down wedding cake. Recreational drones are prohibited from flying in Class B airspace and must notify airport authorities prior to flying in Class C, D, or E. Part 107 pilots may request permission from the FAA to operate in Class B, C, D, and E.

• Class D airspace is generally airspace from the surface to 2,500 feet AGL surrounding smaller airports that have an operational
control tower. Class D airspace has a diam­eter of five miles.
• Class E airspace may extend upward from either the surface or a designated altitude to the overlying or adjacent controlled airspace. Unless designated at a lower altitude, Class E airspace begins at 14,500 feet above MSL over the United States up to but not including 18,000 feet above MSL. 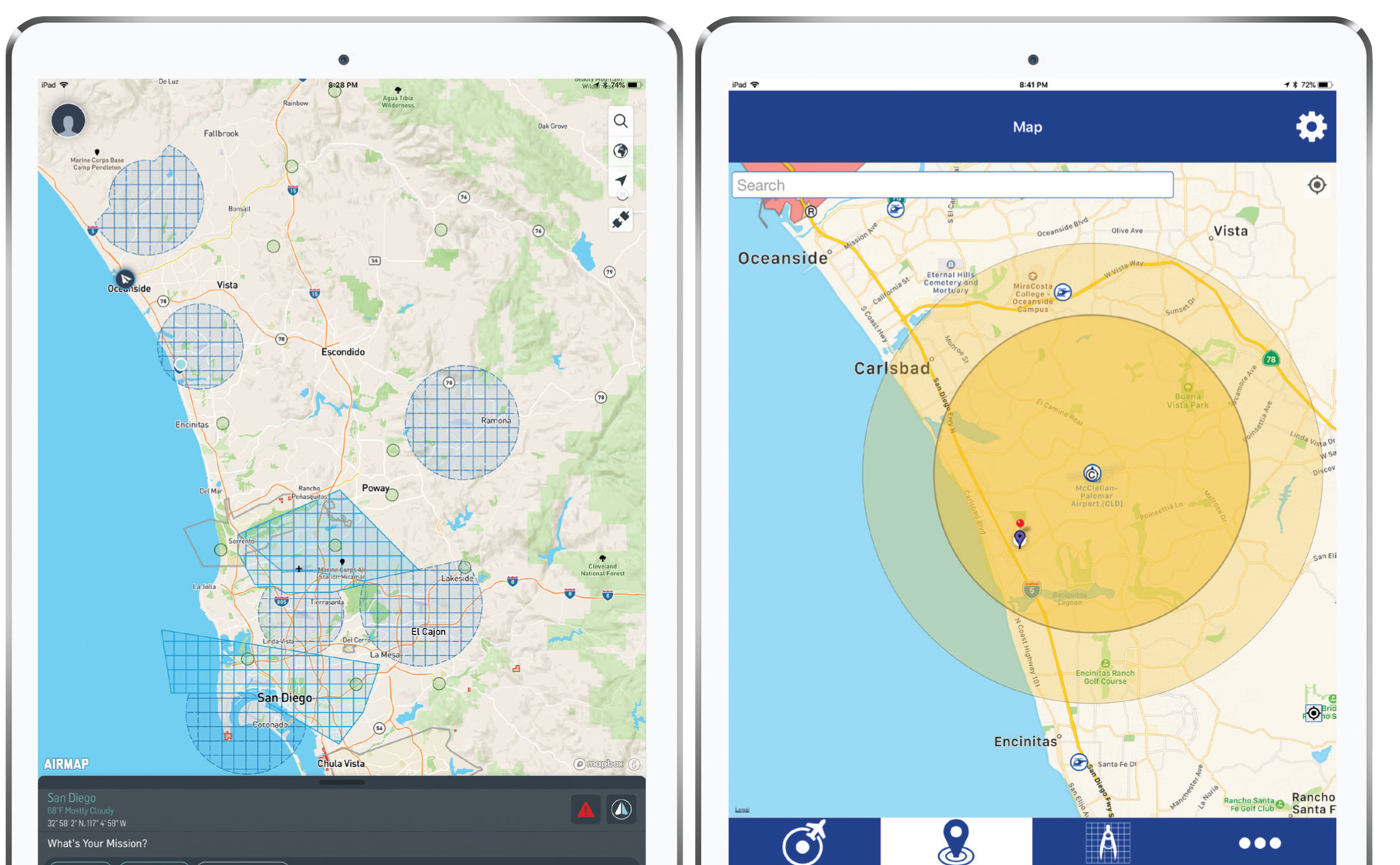 • Prohibited areas includes airspace within which all aircraft flight is pro­hibited. Such areas are usually established for national-security reasons. They are depicted on aero­nautical charts with the letter P followed by a number (e.g., P-49). Examples of prohibited areas include Camp David in Maryland and the National Mall in Washington, D.C.

• Military operation areas (MOAs) consist of airspace established for the purpose of separating certain military training activities from civilian air traffic. MOAs are depicted on aeronautical charts with names instead of numbers (e.g., “Camden Ridge MOA”). MOAs are further defined on the back of sectional charts with times of operation, altitudes affected, and the controlling agency. Drone pilots should be aware of increased military flight operations in MOAs.

• Alert areas are depicted on aeronautical charts with an A followed by a number (e.g., A-211) to inform pilots of areas that may contain a high volume of pilot training or an unusual type of aerial activity. Drone pilots should exercise caution in alert areas.

4. Other Airspace Areas
“Other airspace areas” is a general term referring to the majority of the remaining airspace. Examples of other airspace areas include temporary flight restriction (TFR) areas, stadiums and sporting events, and security sensitive airspace.

TFRs define areas of airspace where air travel is limited because of a temporary hazardous condition, such as a wildfire or a security-related event. The text of the actual TFR contains the details about the restriction, including the size, altitude, time period that it is in effect, and what types of operations are restricted or permitted. The purposes for establishing a TFR include the following: to protect persons and property during wildfires; to provide a safe environment for the operation of disaster-relief aircraft; to protect the president, vice president, or other public figures; and to provide a safe environment for space-agency operations.

Flying drones within a three-nautical-mile radius of any stadium or sporting event having a seating capacity of 30,000 or more is prohibited, starting one hour before and ending one hour after the scheduled time of any of the following events: Major League Baseball games; National Football League games; NCAA Division I Football games;
and NASCAR Cup, IndyCar, and Champ series races.

Security sensitive airspace restric­tions are those that are established within the boundaries of security-sensitive facilities and extend from the ground up to 400 feet AGL. These restrictions apply to all drone flight operations and remain in effect 24 hours a day, seven days a week. Another term for this type of airspace is “national defense airspace.” The FAA depicts all security-sensitive locations on an online interactive map that can be found at
uas-faa.opendata.arcgis.com. 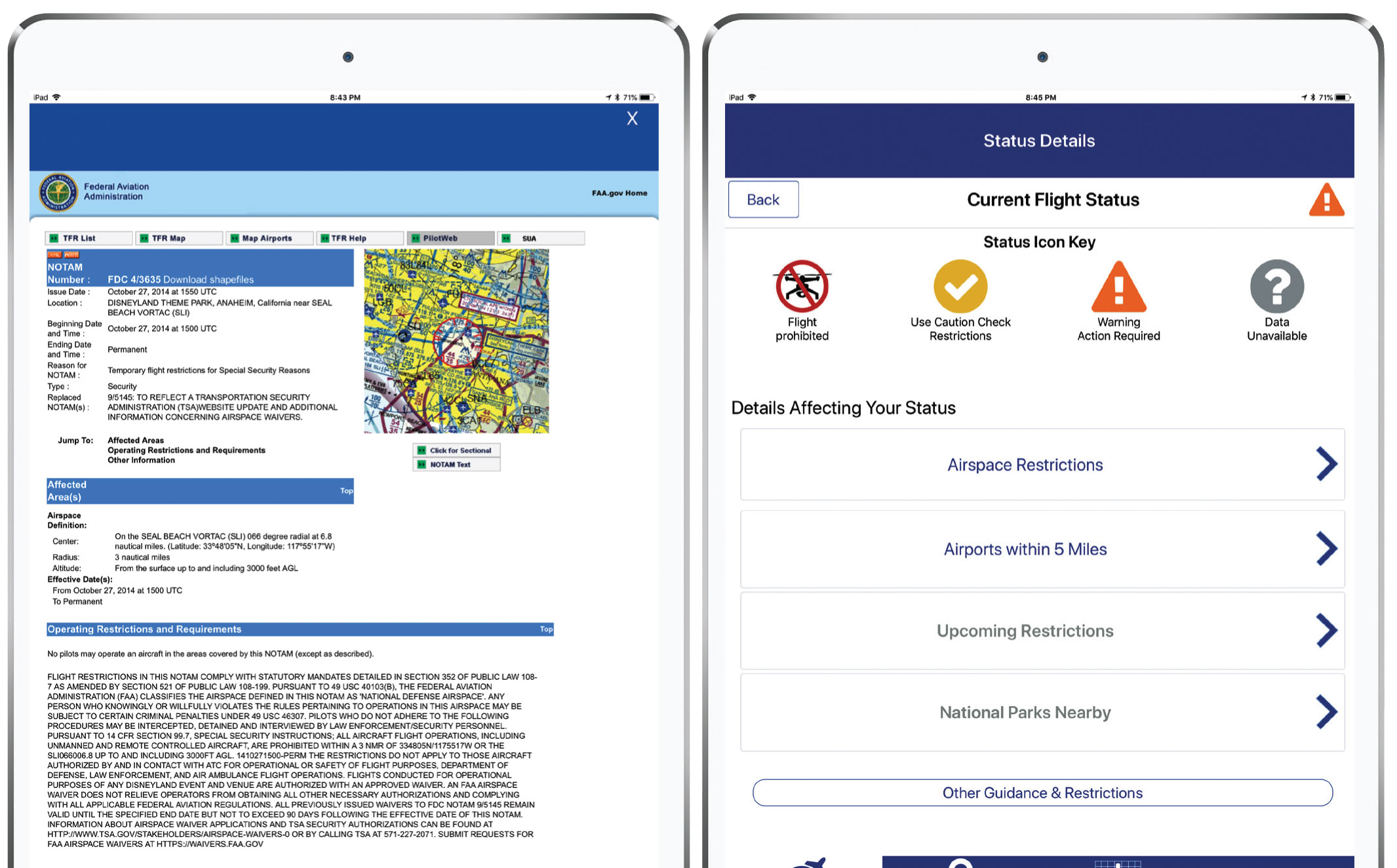 Wildfires
It is illegal to fly your drone in or around a wildfire firefighting operation. Drones flying near wildfires can interfere with aerial firefighting missions, which usually occur at or below 200 feet AGL. If unauthorized drones are spotted near a wildfire, fire­fighting aircraft must often land due to safety concerns. This could decrease the effectiveness of firefighting operations, allowing wildfires to grow larger and, in some cases, threaten lives, property, and valuable natural and cultural resources. Examples of aerial firefighting missions include the following: aerial supervision, air-tanker retardant drops, helicopter water drops, and smokejumper or cargo drops.

Airborne firefighters have had to ground their aircraft several times over the past two years when drones intruded into the airspace over wildland fires. If a drone collides with a helicopter or air tanker, the consequences could be serious. The governor of California recently signed legislation that removes the liability if a firefighter takes down a drone that is interfering with emergency operations.

If you fly a drone without authori­zation over a wildfire, you may also be violating state laws and regula­tions, regardless of whether the FAA has issued a TFR.

Enforcement
The FAA reserves legal-enforcement actions for serious violations in situations such as those that affect the activities of other government agencies. The FAA, for example, has been recently authorized to immediately assess civil penalties of up to $20,000 for drone pilots who interfere with wildfire suppres­sion, law enforcement, or other emergency-response activities.

Any person who knowingly or willfully violates the rules pertaining to operations in restricted airspace may be subject to certain criminal and civil penalties under 49 USC §46307. Drone pilots who violate federal aviation regulations may be detained and interviewed by law-enforcement personnel. Violations of TFRs may prompt the federal government to pursue criminal charges; violators are subject to a maximum of one year in jail and/or $100,000 fine ($250,000 if it results in death). In addition, the FAA may take administrative action, including imposing civil penalties ($32,666 for a small business; $13,066 for an individual not acting as an airman; or $1,437 per violation for an individual acting as an airman) and revoking FAA certificates and authorizations to operate unmanned aircraft. 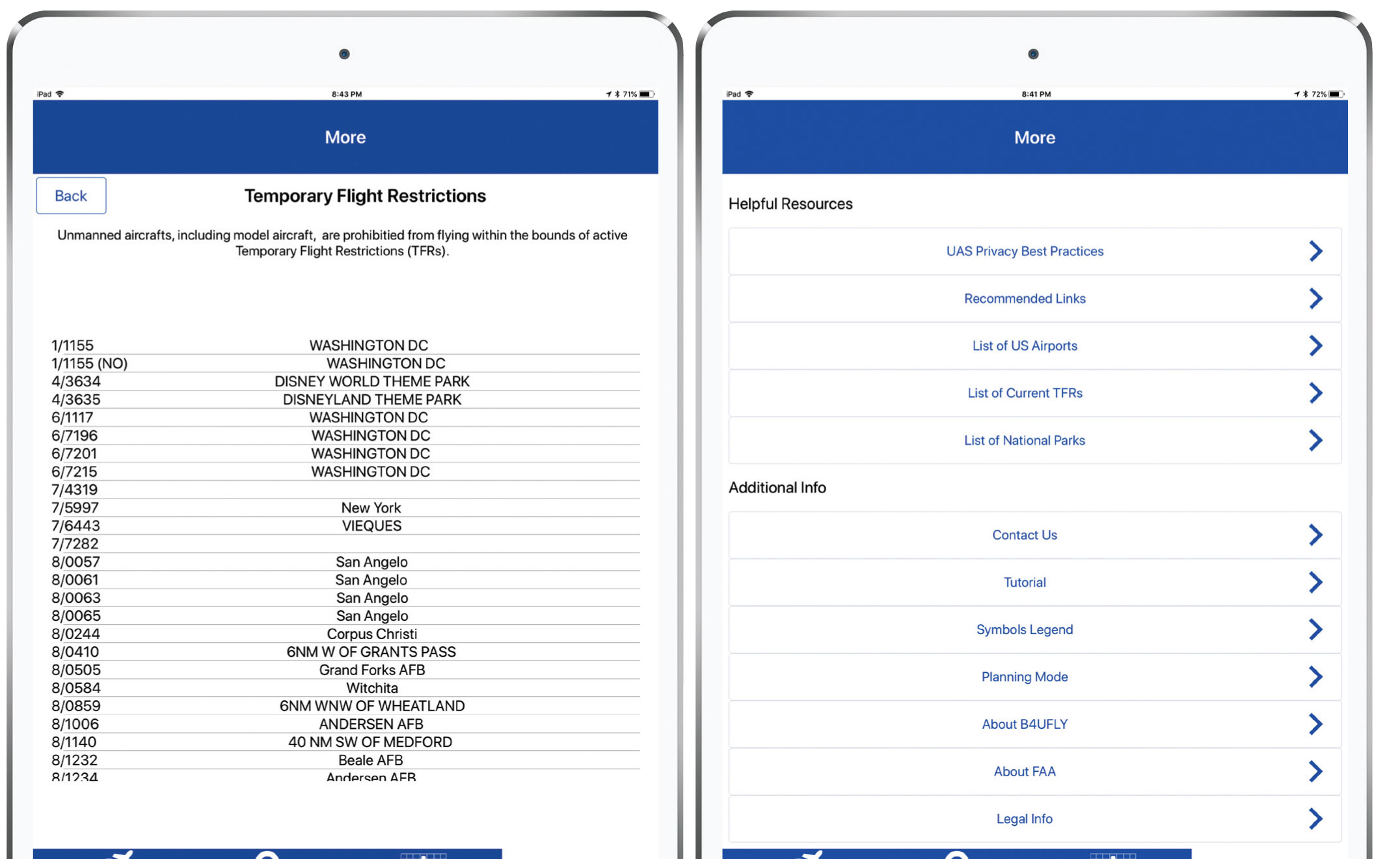 Final Thoughts
Situational awareness is an absolute necessity when it comes to safety in all aspects of aviation. This aware­ness begins on the ground, prior to the flight. All necessary information for conducting safe drone flights is now easily obtained online, making the actual flight safe and enjoyable for all pilots sharing the national airspace.