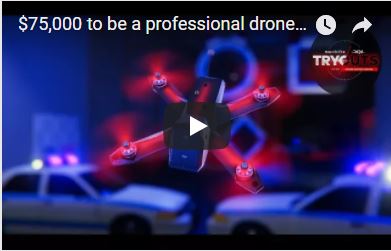 Today MultiGP Drone Racing, the world’s largest drone racing organization with more than 20,000 registered pilots around the globe, and the Drone Racing League (DRL), the only professional Drone Racing circuit on the planet, announced their partnership to offer exclusive prizes for MultiGP participants in DRL’s second annual simulator challenge, the 2018 Swatch DRL Tryouts. Aimed to find the next great drone pilot, the 2018 Swatch DRL Tryouts takes place on the newly launched DRL Simulator, the most realistic drone flight and racing simulator on earth. Aspiring pilots who want to compete in the 2018 DRL Allianz World Championships season, with a $75,000 contract, can download the Simulator and enter the Tryouts today.

MultiGP pilots who compete in the 2018 Swatch DRL Tryouts will have the opportunity to win several coveted prizes, including custom branded race gates and the DRL Racer3, the 90 mph-racing drone flown by elite FPV (First Person View) pilots throughout the 2017 DRL Allianz World Championship Season – as seen by millions of DRL fans on ESPN, Sky, Prosieben, FOX Sports Asia, OSN and Disney XD in more than 75 countries across the world.

“MultiGP and DRL’s partnership means that the two largest names in drone sports will be working together toward the common goal of spreading our sport to every corner of the globe,” said Shawn O’Sullivan, MultiGP’s Press and Public Relations Officer. “DRL’s media presence will help introduce future drone racing pilots to MultiGP, a worldwide community ready to help people get involved in this incredible sport.”

Pilot hopefuls, who are over the age of 18, can enter the 2018 Swatch DRL Tryouts by downloading the DRL Racing Simulator and competing in the simulator’s online Tryouts starting today through January 15, 2018. Players will race Levels 1-5 of the DRL 2017 season on the Simulator, featuring real maps of the racecourses from Miami Nights, Atlanta Aftermath, Mardi Gras World, Boston Foundry, and the Munich Playoffs. The top 24 eligible participants will be invited to test their skills in a live finals eSports tournament on February 3, 2018, for a chance to win a $75,000 professional 2018 DRL contract and compete in the 2018 DRL season.

The DRL Racing Simulator is a true to life FPV racing simulator with real-world physics and maps. Anyone with access to a computer and game controller can download the simulator and fly the same 2016 and 2017 DRL season courses they watch on the leading sports broadcast networks in the world including ESPN, Sky, and Prosieben, testing their skills against the best drone racing pilots across the globe. The DRL Simulator’s online leaderboard enables competing pilots to track their standings against other pilots throughout the world.

For more information, go to http://www.MultiGP.com.