The beach was clear of ice and snow, and the gray rocks and gravel were drying in the warm sun. Nearby grass was showing hints of green, early for this Alaska spring. Drifting on its back in Kachemak Bay, near the town of Homer, Alaska, a sea otter ate morsels of food that it had gathered during a deep dive. 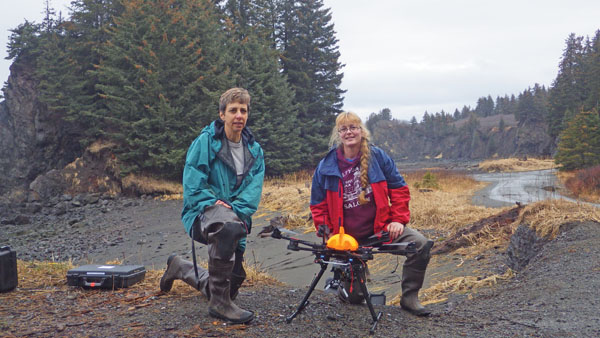 Brenda Konar (near right) and Katrin Iken (far right) with the Ptarmigan hexacopter, which is outfitted with a GoPro camera.

On the shore, spotters with high-powered telescopes watched the feeding otters, while scientists helped a pilot guide a small rotary-wing drone directly above the otters. The group was there to see if unmanned aircraft might help with data gathering.

When the otter went under for more food, the drone dropped closer to the water’s surface to see if the critter noticed it when it came back up. “For the most part, the otters didn’t care,” said Brenda Konar, a professor of marine biology at the University of Alaska Fairbanks (UAF). “Some would slowly swim away, but most were more interested in eating.”

Quiet data collection
Scientists at UAF conducted two field studies to see if cameras on unmanned aerial vehicles (UAV) at various altitudes could take high-resolution photographs of beaches at low tide and hover above sea otters without disturbing them.

Researchers at the UAF School of Fisheries and Ocean Sciences (SFOS) asked a team from the Geophysical Institute’s Alaska Center for Unmanned Aircraft Systems Integration (ACUASI) to help them to be more efficient and collect better data on two different studies. The first study, with the U.S. Geological Survey (USGS), was to see if UAV cameras can take high-resolution video while hovering above sea otters to watch them feed without disturbing them. The second study used unmanned aircraft to take photos of beaches at low tide to help
make a monitoring program more efficient. If these trial studies prove useful, this technology could be used in many regions.

The ACUASI sent two small rotary-wing aircraft to conduct the field tests. One was the Ptarmigan, an electric-powered hexacopter developed by ACUASI to be the center’s primary workhorse for short-range applications that require a stable multirotor system. With a payload capability of 2.2 pounds, it can handle a wide range of scientific instruments. The Ptarmigan carried a GoPro camera.

The other aircraft was the Aeryon Scout, a small but powerful quadcopter. It is easy to use with a 20-minute chargeable battery. It takes off and lands vertically and can fly lower and slower in confined areas, just like the Ptarmigan. The operator controls the aircraft with a tablet that uses Window XP and is specifically made for ground control of the Scout. The Scout also was outfitted with a GoPro camera. 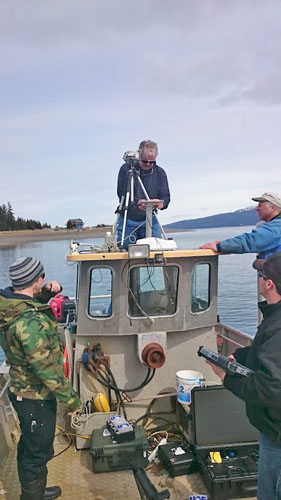 The team sets up the Scout on the Munson for boat operations.

Intertidal study
Traditional beach-monitoring fieldwork means that Konar, Katrin Iken of SFOS, and their team wait until the tide goes out to place a PVC pipe grid on the uncovered shore. Researchers then count snails, sea stars, kelp, clusters of sea grass, and other living things in the quadrants. “We want to record what plants and animals are living on these beaches now so that we can monitor natural changes and changes that may be occurring with climate,” Konar said. “This will let us see what changes happen in the case of a big event, such as an oil spill.”

Work on one beach takes about four hours and ends when the tide comes back. The short time period also limits how much of the beach they can look at. Konar wondered if unmanned aircraft could help gather more data in the limited time frame. Sam Vanderwaal, an ACUASI engineer and project manager, thought that was likely. The Scout’s mission was to fly over more beach to capture data in images and video.

To do so, the team had to get approval from the Federal Aviation Administration (FAA) for the flights. Because the unmanned aircraft would be flying in commercial airspace, one member of the team had to monitor air-traffic-control broadcasts for potential issues. There were no issues of interception of other aircraft with the Scout or the Ptarmigan, but high winds and waves, along with rain, played a role. The Ptarmigan had limited flight time, and the Scout took up the slack.

“The good news is we learned more about the scope and the ability of using UAS [unmanned aircraft systems] for this kind of research,” said Vanderwaal. “It can be done but needs the right aircraft and payload, certain weather conditions, and well-ironed-out flight plans.”

The scientists should be able to compare their hand-collected data with the Scout’s images. “We wanted to try it to see if it works,” Konar said. “If we can fly out over the beach, we can do much larger, longer counts.”

The tide mission had successes and setbacks, but Vanderwaal said that this is to be expected in science. “We think we can get better detail and a better sensor for them by using a different aircraft,” he said. “It was a proof of concept.” 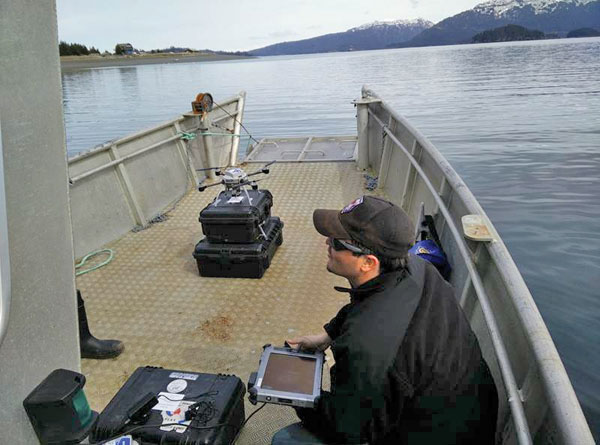 The team prepares to launch the Scout from the Munson.

Sea otter study
For the sea otter study, Daniel Monson, a wildlife researcher with the USGS Alaska Science Center, has been thinking for a couple of years about how unmanned aircraft might help scientists watch sea otters forage. Researchers currently have to stand on a beach with high-powered spotting telescopes to watch how long an otter dives for food, what it brings up, and how long it takes to eat the morsel, he said. The telescopes allow visuals to 600 meters, and scientists wonder what is happening with the creatures beyond their sight. The telescopes can’t be used easily on a rocking boat because the view in the high-powered lens can’t be controlled with the boat’s movement. That’s why observers stand on the shore. 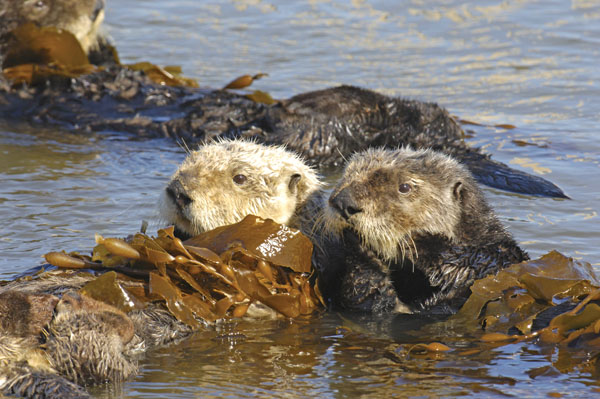 Unmanned aircraft might solve the observation problem if they don’t alter the animal’s behavior. Also, the aircraft might get better view from above.

The weather was better for this study. The Scout flew over 30 flights, including three off a boat—something that the observers can’t do. For the most part, the otters didn’t mind the whirring of the quadcopter and just kept eating, Monson said. 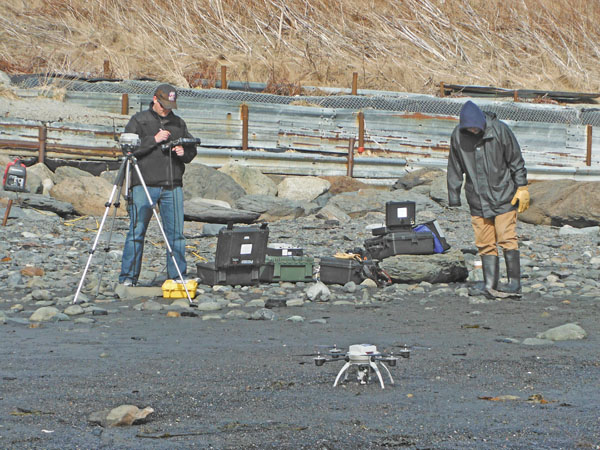 The team enters GPS points into the Scout’s tablet for a transect flight.

The aim of the study was to determine baseline requirements for UAS use and sensor specifications. “I think it will be a usable tool,” he said, but it’s more complicated than he imagined. “At first, I thought they were tiny helicopters and anyone could fly them,” he said.

ACUASI had a team with travel trailers at the test site. Besides a spotter monitoring air-traffic control, the UAS needs an operator as well as someone to watch what the aircraft is doing and if there might be interference. “After doing this, I know it’s a big job. We’ll probably have to have ACUASI do this for us for a while.” 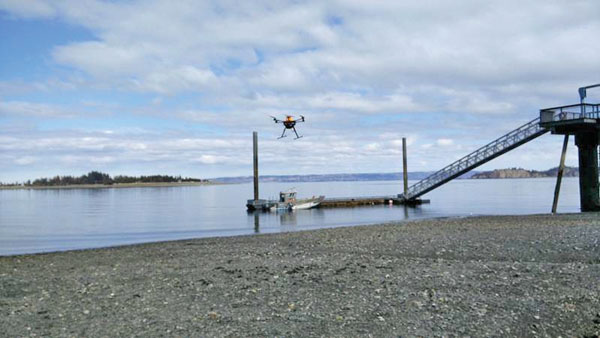 Not only does operating UAVs require a highly trained team but also a UAV research mission needs people who can integrate the craft into the research. On these missions, for instance, the ACUASI team had to understand the science of intertidal beaches and sea otters to find a way for the aircraft to be useful. In past missions, ACUASI teams have had to understand the language and processes of different government or research agencies as well as satisfy FAA requirements. 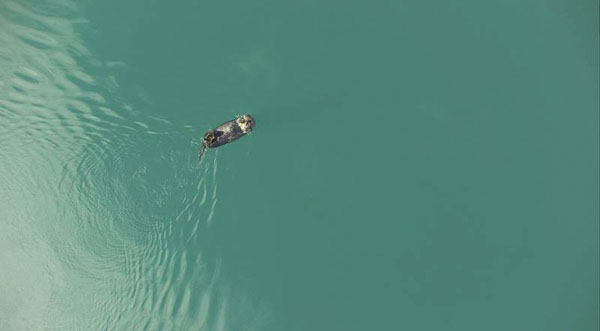 The FAA requirements will be easier on the next missions. ACUASI recently received a national certificate of authorization from the FAA to fly UAVs, greatly simplifying the permissions necessary to use the aircraft professionally.

Monson imagines all sorts of possibilities that unmanned aircraft might provide in his work. An aircraft could be a good way to upload data from tagged animals without having to recapture them; just send a quadcopter out over the animal, and log into a computer for an uplink between a chip in the critter to onboard storage. They also might help monitor the remote coastlines of the Aleutian Islands, where it’s difficult for manned aircraft to fly because of the lack of fuel stops. 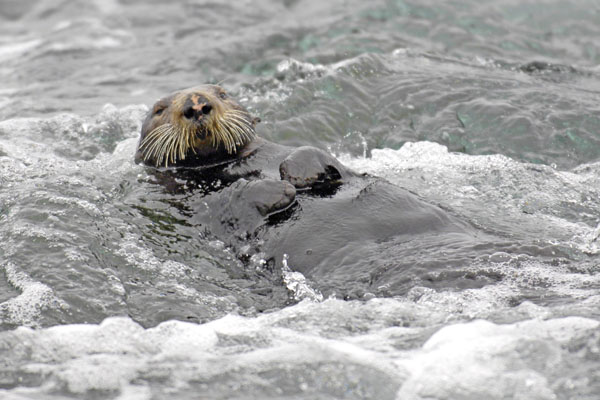 The star of the show, captured in pixels by a GoPro.

Imagining what unmanned aircraft might do and what they actually can do is often different. According to Vanderwaal, it’s a multistep process that starts slowly, as in the case of these two missions. “We provide the aircraft and the team to fly them, and we’re experts,” he said. “But we also have to learn how to integrate the aircraft into their process.”