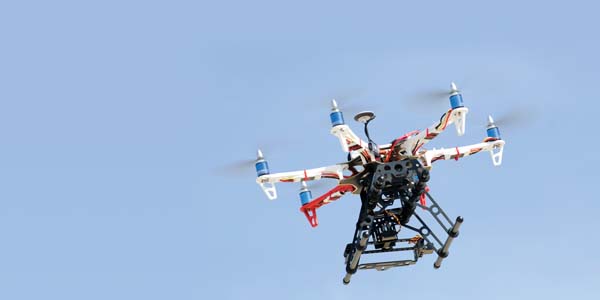 Multirotor aircraft are an excellent platform for aerial photography and video. They are very easy to fly and have very few moving parts. They also don’t produce much vibration and can hover in one exact point for as long as needed. While these aircraft are easy to fly, there are different flight modes that make it a little easier on the pilot.  Understanding how and when to use these modes will make flying and getting a good shot almost a sure thing. Let’s take a closer look at flight modes and when and how to use them.

Many newer rotordrones will have at least three different flight modes: a GPS attitude flying hold mode, an attitude flying hold mode, and a manual flying mode. Each of these modes will exert more or less stability on the drone while flying. When to use them will depend on your flying skills and circumstance. The mode that has the least amount of stability is manual mode. 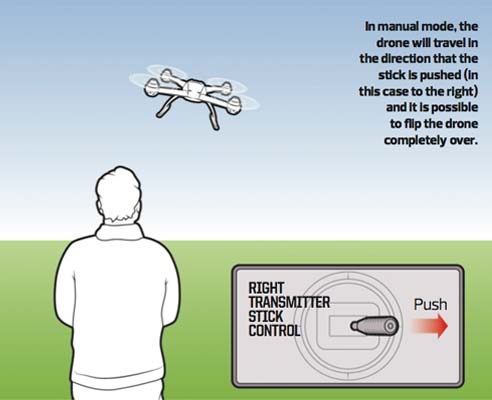 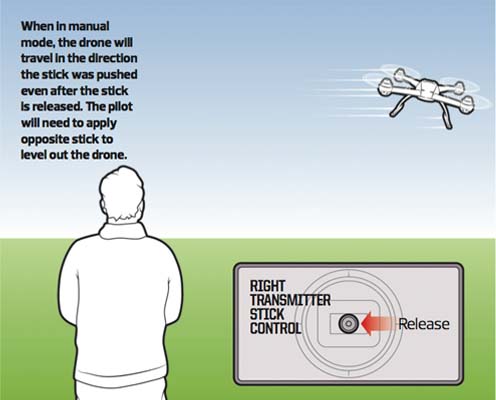 In this mode, the drone will go where you control it and will require you to control it every step of the way. This is the mode to use if you want to do aerobatics with your multirotor because there will be no attitude/angle limitations and no vertical velocity locking, which means you can flip the drone around into any angle. You can’t take your hands off of the sticks in this mode and it will also require all of the corrections during flight to come from the pilot. There will be no assistance from the controller board. Again, this is the perfect mode for performance flying, aerobatics, and any type of flying that demands precise control for the pilot, such as flying obstacle courses in competition or performing loops and rolls. 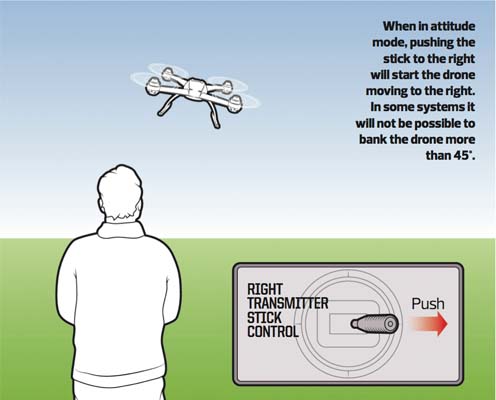 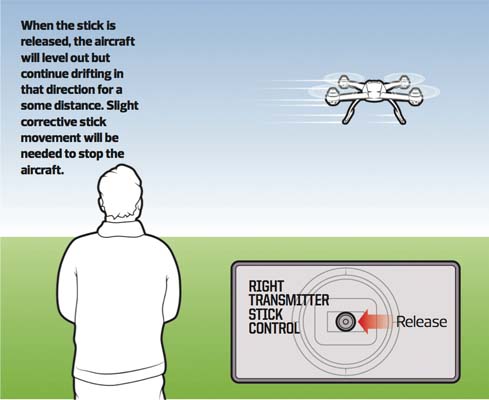 The nice thing about this mode is that if you get a bit disoriented, you can release the sticks and the multirotor would return to flying flat and level. This is the perfect mode for shooting video because the drone can follow a subject, and if you release the stick, it will level out but continue to drift in that direction. In most filming/shooting attitudes, holding mode will be smooth and there won’t be an abrupt movement in the video. This mode is perfect for the videographer or the person who has a little bit of experience flying multirotor drones. 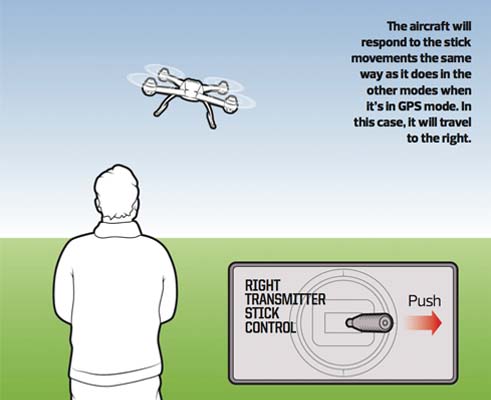 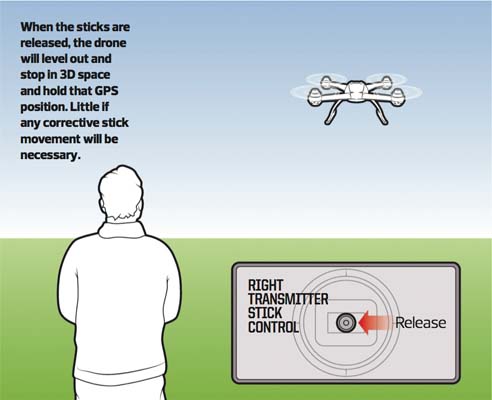 In this mode, the multirotor drone is in constant communication with GPS satellites. This allows the controller to stabilize the drone in three-dimensional space, maintaining altitude and position. In this mode, if you should run into any problems, just release the transmitter sticks and the multirotor will stay in a stationary position until you get your bearings and input a new direction. This mode will also help the drone stay in one position during a windy day. Unlike the previous mode, the GPS mode will stop the forward movement of the multirotor when the sticks are released. There is no need for corrective stick movement in this mode.

This mode is perfect for the photographer who wants to position a drone in a certain spot and take a number of photographs. Of course, because this is a GPS system; it only works outdoors with a clear view of the sky above the drone. This mode can also be used for video, however, because the GPS will try to correct any wind or movement, it could result in some shakiness transferred to the video. This will also depend on how the video camera is attached to the drone.

This mode is perfect for the first-time multirotor pilot who does not have much experience in flying these aircraft. If the pilot becomes disoriented, they can, by simply releasing the sticks, have the aircraft hold this position until the pilot regains their composure.

These last three flight modes mainly deal with the stability of the aircraft. But one of the beauties of these advanced multirotor aircraft is that they have the latest advances in modern technology. This also allows us to control the orientation of the flight in relationship to the pilot. This is another advantage of having GPS technology linked in with our aircraft. Let’s look at these three different modes of intelligent orientation control. 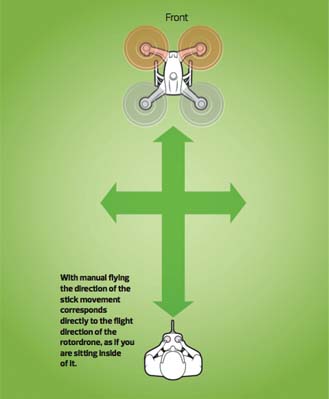 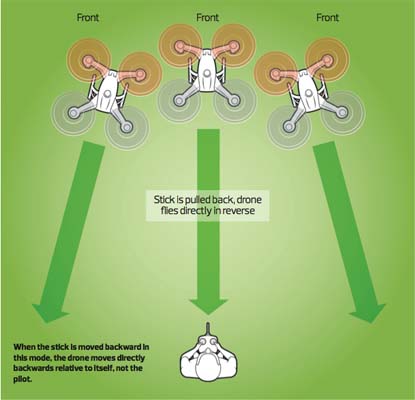 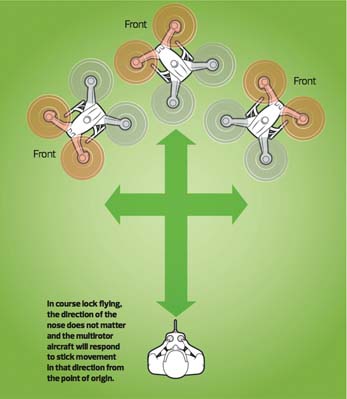 This mode is good if the pilot needs to move during the flight; for example, if you happen to be filming something that is moving and you need to move to follow it. This is the intelligent orientation control to be in because all of the directions will remain the same throughout the flight. 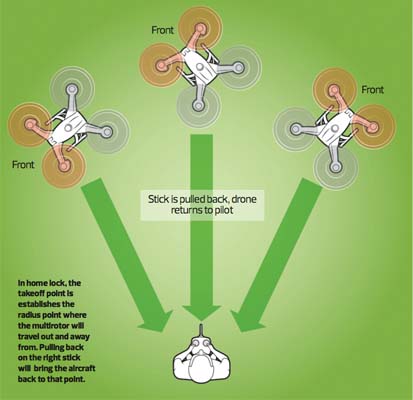 The second intelligent orientation control is called home (or home point) lock flying. The starting point is again selected by GPS when the multirotor is first started. However, every time the stick is pushed forward, the drone will fly away from that point, and when the stick is pulled back, the drone will fly back toward that point. Again, this is regardless of the orientation of the multirotor’s nose. In this mode, if you flew the aircraft out 50 yards and gave it right stick, it would fly a 50-yard circle around the home (starting) point. In our example above, if you fly 50 yards straight from the starting location, then fly 50 yards to the right, then fly 50 yards backward, the aircraft would be back at the home point.

This is a great control mode to be in if you are always going to stand in the same spot during flight. For example, if you were standing on the dock and filming surfers out on the ocean, this is the orientation control that you would use because all you need to do is pull back on the stick and your multirotor will return to that take-off point on the dock.

Hopefully these explanations and examples will give you a better understanding of the different flight modes and intelligent orientation controls available on many multirotor drones. In most cases, the flight modes will be on one three-position switch and the intelligent orientation controls will be set up on a different three-position switch. Take advantage of the latest in technology and make your flight experience easier to control and much more enjoyable.