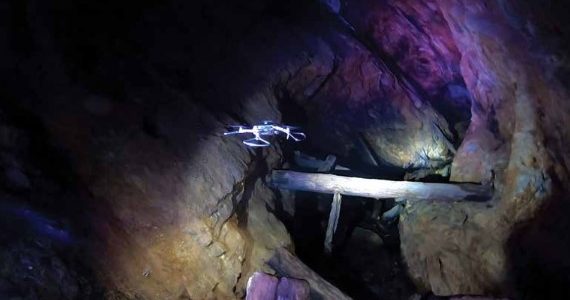 When Consolidated Gold Mine in Dahlonega, Georgia, wanted to open more of its areas to public tours, they asked Inspired Intelligence, a family owned and operated drone business in Buford, Georgia, to help. Inspired Intelligence CEO and founder Nir Pe’er explained, “Besides drone technology, we also used new, amazing cutting-edge technology called LiDAR. We were able to completely scan the entire mine and the grounds above it and produce a 3D model of the mine … something that was never done before. Also, our drone technology helped us to fly into inaccessible areas of the mine that nobody has been able to set foot into for decades. Our drones, equipped with special lights, were able to collect amazing, high quality photos and videos of these areas of the mine.” Pe’er said, “During the project we also used underwater drones that were able to enter areas of the mine that are underwater. Some of these areas are literally completely unknown. The only information we had to work with was known from the miners’ journals and old newspapers. We were able to go in and provide eyes underwater to see what is in there.” Pe’er also noted that the team’s job was not to actually determine the safety of the mine. “In this project we were able to provide the right data so the mine can determine for example what areas of the rock are hard enough, and which parts would be too soft. By using our footage to identify the type of rock in particular inaccessible areas of the mine and this will help them in future planning of opening new sections of the mine to the public.”