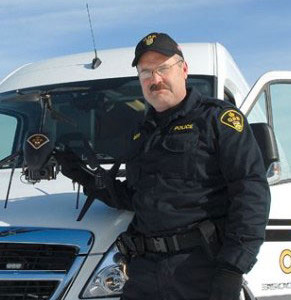 In October of 2007, the first operational deployment of a civilian unmanned air vehicle in North America took place in Fort Severn, Ontario, Canada, at a homicide investigation undertaken by the Ontario Provincial Police (OPP). What differed from other flights was that it was the first event in North American history that had received federal approval and the first operational license issued by a federal agency. While you may suspect the unit deployed to have been a test aircraft from some multi-national company, in actuality it was a fixed-winged model airplane dubbed the “FIU-310,” designed and created in the garage of OPP Constable Marc Sharpe. Marc realized the need for a new way to collect evidence and filled that need by doing what most modelers only dream of: finding a way to get paid to fly model airplanes at work.

Marc notes, “Our major case workload here usually required us to get an aerial image of the crime scene to make it easier in court for the witnesses and the officers involved, by letting them refer to an aerial image to explain the special relationships of where they were or where the incident happened.”

The problem with acquiring these useful pieces of evidence was the costs associated with chartering an aircraft to fly into the remote northern area of half a million square kilometers covered by Marc’s forensic unit based out of Kenora, Ontario. Flights requiring charters for two to three hours one way could amass bills of $5,000 or more, for what he deemed “a couple of bad photographs from the window of an airplane.” It was then that he began to envision a better way of doing things. “I just felt with the experience I had in designing and building aircraft,” says Marc, who has been modeling in his garage workshop for years, “that I should be able to build something that could be modular, that we could take to these scenes, put together, throw up, and take some pictures. Simple, right?”

Marc preps the FIU-310 for its first Operational Mission at Fort Severn. (Photo by Sean Tarrant)

It was far less simple than Marc ever imagined. In reality, the unit took over three years of his personal modeling time and three full prototypes before it was ready to be deployed. Then came the red tape in trying to establish the basic air rules for an aircraft that had, for the past 50 years, operated largely unregulated, for a purpose that, by media standards, could be viewed under the negative optics of surveillance.

IF WE NEED A WARRANT TO OBTAIN AN IMAGE OR INFORMATION, IT DOESN’T MATTER IF IT’S A VAN OUTSIDE WITH BLACKED-OUT WINDOWS OR FLYING ABOVE WITH AN UNMANNED AIRCRAFT.

Marc says, “Regardless of the size of the aircraft, if it’s used for any commercial or work purpose, then it, by definition in the Canadian Air Regulations, becomes an ‘aircraft’—that was just the way it was written many years ago. They didn’t write any specific rules to deal with unmanned air vehicles, so the default position was to use a special flight operation certificate (SFOC).”

Designed for one-time uses at airshows, balloon festivals, and other one-off events where an aircraft would be used for a specific time at a specific place, there were no guidelines in place for a system that you could in no way predict when and where it would be deployed. “It was something totally new and foreign to them,” says Sharpe. “So it took some convincing.”

As for the optics, Sharpe waves those away easily, pointing to Section A of the Charter of Rights and Freedoms. “In the police world, we can’t violate people’s right to unreasonable search and seizure. So, if we need a warrant to obtain an image or information, it doesn’t matter the platform we use to get it. Whether it’s a van outside with blacked-out windows or flying above with an unmanned aircraft, if you need a warrant, you still need a warrant and that hasn’t changed.”

The body section of the F1U-310 illustrates the payloads it carries.

Providing Transport Canada with the system specifications, Marc outlined the remote and isolated areas he proposed to deploy in. Due to Marc’s background, not only in model aviation but also as a holder of a private pilot’s license, he was soon able to obtain the unique SFOC. Armed with approval, Sharpe and the FIU-301 went to work on cases that included everything from forensic roles in homicides to traffic accidents to tactical support and search and rescue roles. His caseload proved, without a doubt, that an unmanned aircraft could be a valuable tool in police work.

“What it gave us was an opportunity to get our aerials earlier and at a point when the scene was fresh,” says Marc. “Normally, when we used to charter those planes, the images we got were often well after the fact, sometimes even in a different season. And in the forensic world, it’s much better if we can get those images before we enter a scene and contaminate it.”

One particular case Sharpe worked on even led to the capture of the perpetrator. He attended the scene of a homicide on a snow-covered, frozen lake that was deep in a remote area, while snowmobile tracks lead from the scene of the crime, and the lake was criss-crossed with tracks as it was a popular recreation area. A quick aerial survey of the scene, that took less than 10 minutes to undertake, showed a pattern in the tracks that identified the peculiar gait of the individual who had committed the crime, and even found the murder weapon thrown away haphazardly and hidden deep within the snow—something Marc says would have otherwise never been found, at least until spring. “It proved that being able to take that image as soon as we get there is invaluable, to the courts, to the investigation, and to our work.”

Marc’s garage is filled with the 20+ builds and designs he has created throughout his modeling history.

Another deployment involved a traffic accident where a semi had jack-knifed, spilling its load of hazardous material. With images sent directly to the traffic investigator as he was en route, they were able to identify the extent of the area contaminated, nearby hidden roads that would also need to be secured, and the most efficient way of rerouting traffic. Similar deployments have continued throughout the OPP, though sadly no longer through the use of Sharpe’s original creation.

A year and a half after it was first deployed, Marc’s FIU-310 fixed-wing was officially retired. Its size and other limitations required Sharpe to search out a smaller, more easily maneuvered, commercial aircraft, which he found in the Draganflyer X-6 system, a 6-rotor helicopter manufactured in Saskatoon, Saskatchewan. “It was the next natural progression,” explains Marc, though he himself admits he’s not a “helicopter guy.” “The Draganflyer is safer, smaller, and easier to operate, and our first deployment, which was the case involving the homicide out on the snow-covered lake, turned out to be another aviation first in that it was the first time a commercial system was deployed in an operation role with federal approval. So, essentially, every time we flew these things in those early days, we were creating some sort of an aviation first in the industry.”

In recognition of that leadership, the original FIU-310 now sits housed in a storage facility in Ottawa as part of Canada’s National Aviation Museum, for a future exhibit that will feature the history of unmanned aviation systems; yet another first for the FIU-310.

“From a personal standpoint, it’s really cool,” says Marc. “There are a lot of models in museums, but I don’t know of one that creates that sense of being a part of aviation history, so that’s something that gives me a lot of personal satisfaction. My creation will actually outlive me now.”

Marc poses with the original Draganfly X-6, which replaced the retired FIU-310. (Photo by Jackie Sharpe)