Whatever else there is to say about the FT Aviator from Fluidity Tech, it is bold — even audacious — in the breadth of its vision. While other companies are content to tinker with the placement of a display screen or the layout of an app, Fluidity has dared to fundamentally re-imagine the interface between the pilot and the drone.

By now, all professional operators know how to work a two-stick controller with their eyes closed. However, there is no particular reason that should be the default scheme for steering a drone around the sky. It was borrowed from the traditional aeromodeling community, the source of much of the earliest small uncrewed aircraft systems (sUAS) technology — because that’s what was available.

However, when Chuck Yeager broke the sound barrier, he did it with his hand wrapped around a single joystick, and so it has been with virtually every noteworthy achievement in aviation going back to the Wright Brothers. Is it really so hard to imagine that single-stick flying might one day be as prevalent among drone pilots as it is among our colleagues who go along for the ride? 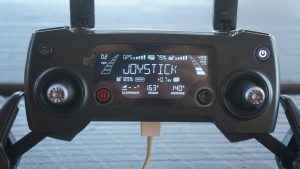 The FT Aviator is the brainchild of a single man: Scott Parazynski. It is literally true to say that he sees the world differently than the rest of us: specifically, from 250 miles up. Parazynski is an astronaut, who flew twice on board the Space Shuttle, as well as a medical doctor who has climbed to the summit of Mt. Everest. So, if anyone has the vision and tenacity to change the way we fly our drones, it may well be him.

Drawing on his considerable experience maneuvering objects in three-dimensional space, Parazynski’s goal with the FT Aviator was to develop an intuitive control scheme for rotordrones. While flying with the joystick, your dominant hand controls every aspect of the aircraft’s movement: pitch, roll, yaw and throttle. 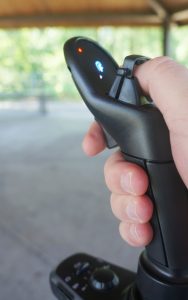 Pitch and roll work like a conventional aircraft yolk: push forward on the joystick and the nose drops, pull back and the nose rises. Likewise, pushing left causes the aircraft to roll in that direction, while pushing right has the opposite effect. Aircraft yaw — that is, which direction the nose is pointing — is controlled by twisting the joystick, and the throttle is controlled by your thumb and forefinger, using a sliding trigger-button on top of the unit. Push up on the trigger and the aircraft rises. Push down on the button and it descends.

With your dominant hand directing the aircraft, your non-dominant hand is available to manipulate the camera controls. The FT Aviator makes it easy, with buttons and a lever on the base of the unit to take still photos and capture video and control gimbal pitch. There is also a knob to control the overall speed and responsiveness of the aircraft, nearly identical to the tortoise-hare slider on Yuneec’s ST-16 controller. Finally, there is an auxiliary button that you can define using the Fluidity app, which available for both iOS and Android devices.

For the moment, the FT Aviator is only compatible with DJI products — nearly all of them. According to Parazynski, the Fluidity team is actively working to make it interface with aircraft from other manufacturers, as well. The setup procedure is simple enough, but I’d suggest you do it for the first time at your bench, so you have ready access to the Internet for the inevitable firmware updates and technical questions. 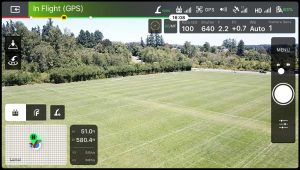 In my experience, nothing with that many connections ever works right on the first try — and the FT Aviator was no exception — but I had it up and running in just a few minutes. While using the joystick, you will actually fly using the Fluidity app. It closely resembles the various DJI Go apps that you will inevitably be familiar with, so you don’t have to worry about getting confused. The only big difference is the addition of a few extra buttons and indicators related to the FT Aviator.

While using the joystick, your regular controller becomes inert: its role reduced to that of a radio relay. At the touch of a single control within the app, you can re-enable your controller, and the same thing happens automatically if your smart device loses its connection with the FT Aviator, or its batteries run dead. 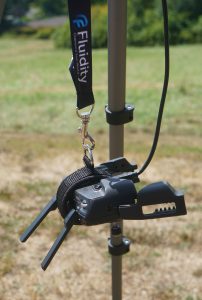 The real question is: what are you going to do with the controller while you’re flying with the joystick?

In the box you get a lanyard and a strap, allowing you to hang the controller around your neck — close at hand in case you need it. The kit also includes an ambidextrous clamp to hold your smart device alongside the joystick. However, if you use a tablet instead of a smart phone while flying, you’ll need to make alternative arrangements. The camp is too small and too lightly built to support even a mini-sized tablet.

Having confirmed that the system was fully functional on the bench, I headed out to wide-open field for my initial test flight. Of course, with only one joystick, you can’t press “down and in” to start the motors — so you have to rely on the Push-To-Takeoff button on the base of the unit to get started. The propellers spun up and my test aircraft, a DJI Mavic Pro Platinum, rose confidently to about five feet in the air and awaited my command.

I’m not going to lie: after ten years of using a conventional controller, the FT Aviator took a little getting used to — not unlike learning to fly with a two-stick controller in the first place. In my mind, I could see very clearly what I wanted the aircraft to do. However, I wasn’t always able to get it done on the first try, as I had to stop and remember the correct sequence of inputs using the joystick.

Furthermore, when maneuvering in close quarters — as when approaching my recovery site, for example — I found I had a tendency to over-correct, leading to a few narrow misses with trees and other terrestrial obstacles. I don’t blame the FT Aviator for this, only my lack of experience with using it. So, be sure to give yourself plenty of room to work when you take it out flying for the first time. 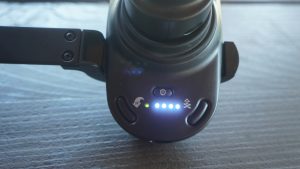 As my confidence grew, I found it was easier to make complicated maneuvers than I had expected: for example, combining roll and yaw to rotate around a subject, keeping it in the center of the frame while simultaneously descending. Furthermore, having my non-dominant hand removed from control of the aircraft gave me a greater ability to make subtle, controlled movements with the gimbal.

Making changes to the tortoise-hare knob, I found it did appreciably affect aircraft performance. However, even turned up to maximum it didn’t feel quite equivalent to full-on Sport mode. The app also allows you to make changes in the sensitivity of the joystick and gimbal controls. However, I found myself wishing that I could separately affect pitch, roll, yaw and throttle. To me, the yaw seemed much more sensitive than the other inputs, making it difficult to pull off a completely fluid maneuver. Still, I’m sure that’s something Fluidity can fix with a software patch. I’ll be waiting.

The literal, and figurative, weak link in the whole system is the clamp designed to hold your smart device alongside the joystick. I fly DJI with an iPad Mini, and even using an adapter it simply wasn’t practical to mount it: I was afraid the clamp would collapse under its weight and send my expensive tablet tumbling to the ground.

My solution was to fly sitting down at a table. That way, I was able to prop up my tablet for easy viewing and have some leverage as I manipulated the joystick. The base of the unit also incorporates a tripod mount if a flat surface isn’t available at your flying site. 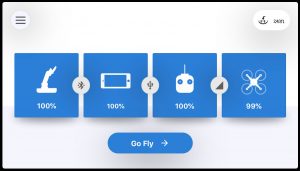 So, has Parazynski succeeded in creating a more intuitive interface for drone pilots? I guess that depends on the pilot. For me, with 10 years of built-in muscle memory tied up in the conventional two-stick approach, there was definitely a learning curve. If right this moment I had to fly an important mission that called for precision maneuvering, I’d reach for the controller that came with the aircraft — at least until I log more time with the FT Aviator.

However, for a new pilot flying for the very first time, I have no doubt it would be vastly easier to master than a two-stick controller. Furthermore, in my experience as a trainer, the new pilots coming online these days are not part of the old-school hobby crowd. They are working professionals in other fields, who want to use drones to their jobs better.

They are flying for results, not for the thrill of it — and anything that makes it easier for them to get those results will be welcome.–By Patrick Sherman, Roswell Flight Test Crew