The expansion of drones into our everyday lives is occurring at an unprecedented rate, and although the vast majority of people using drones find them as enjoyable forms of entertainment or specialized tools for industrial applications, there are unfortunately some who fly them in an improper manner. With a relatively low expense, high availability, and ease of portability, drones are in many ways ideally suited for criminal enterprises.

DETECTORS
One company offering detection and jamming capabilities is DroneShield. Several of the company’s products offer multisensor detection technology, and its proprietary equip­ment can search for drones using radar, radio frequency, acoustic, visual, and thermal sensors. When a drone is detected it can be neutralized with the DroneGun Tactical.

According to the company’s CEO, Oleg Vornik, the jammer has been very successful, and since the company’s start in 2014, DroneShield has sold its systems in more than 50 countries. Its products have been used by numerous militaries and are big in the events space. “Events are big,” says Vornik. Already DroneShield has seen use at NASCAR races, the Winter Olympics in South Korea, and the Ironman World Championship in Hawaii, just to name a few.

MCTech is an Israeli company also working to detect and jam drones. Its vice president of sales and marketing, Ido Bar-Oz, says the company originally entered the space in 2014 when the New York Yankees asked for solutions to prevent drones from recording games. “A month after presenting the solution, the Israeli government agencies asked us to develop a system with greater capabilities against UAS.” The solution was the MC-Horizon, a high-powered anti-drone system. With both active and reactive setups, the hardware is able to simultaneously block all civilian drone bands. The system is designed to work in confined areas, such as prisons, military bases, and nuclear facilities. 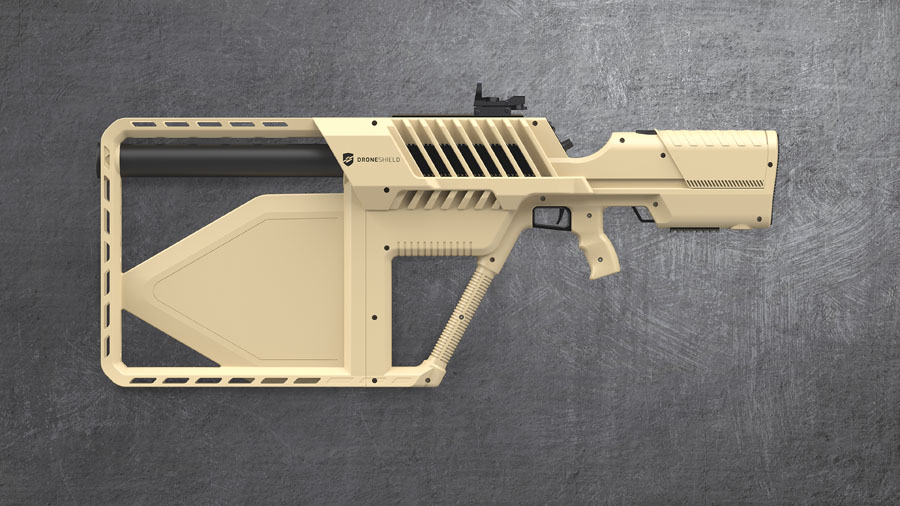 A sideview of the DroneGun Tactical jammer. 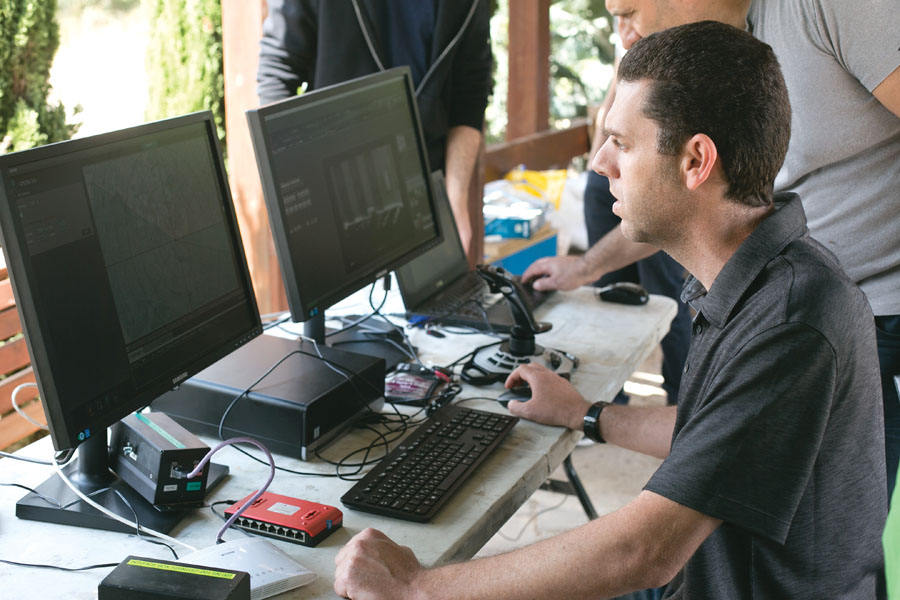 INTERCEPTORS
With numerous solutions available to detect unwanted drones, several companies have chosen to focus on intercepting drones once they are detected.

Battelle’s DroneDefender is an example of a portable countermeasure and was designed specifically for the conti­nental United States. According to Katy Delaney, media relations manager, and Alex Morrow, one of the main engineers on the project, Battelle sees the DroneDefender as the best solution from a cost-per-engagement standpoint. A directed-energy countermeasure, this nonkinetic device can defend airspace up to 400 meters away. The system can disrupt remote control and GPS. Popular Science awarded the DroneDefender its 2017 Best of What’s New Award.

In the United States, many of the laws regarding the interference of aircraft in flight from a physical or jamming perspective reveal a complicated issue. Both the FAA and Federal Communications Commission prevent such devices from being used by the general public. Solutions do exist, however, that do not electronically interfere with drones.

Guard From Above offers a unique answer: birds of prey. Located at The Hague Security Delta campus, this Dutch com­pany has more than 27 years of experience in training birds of prey. With an in-depth understanding of drone threats, the company has trained birds to aid military and law-enforcement agencies. The birds are much stronger than the drones and are unharmed as they effortlessly swoop in for the kill.
Man-portable cannons capable of launching nets have also been developed to counter the threat. The SkyWall 100 by OpenWorks Engineering is one such solution. This handheld, portable device can physically capture a drone without electronic countermeasures. The operator can aim and fire a net, which quickly entangles the drone. A parachute then slowly brings the captured UAS back to the ground. Customer-relations manager Marjan Boudenoodt says that, while working in the counter-IED (improvised explosive device) field, OpenWorks Engineering realized the danger drones could create and wanted to develop a solution. Boudenoodt states, “It was a simple, straightforward idea: physical drone capture; you get a predictable outcome. Low collateral damage and forensic investigation is possible on the captured drone.” The company is already working on upgrades that allow better integration with existing detection systems. 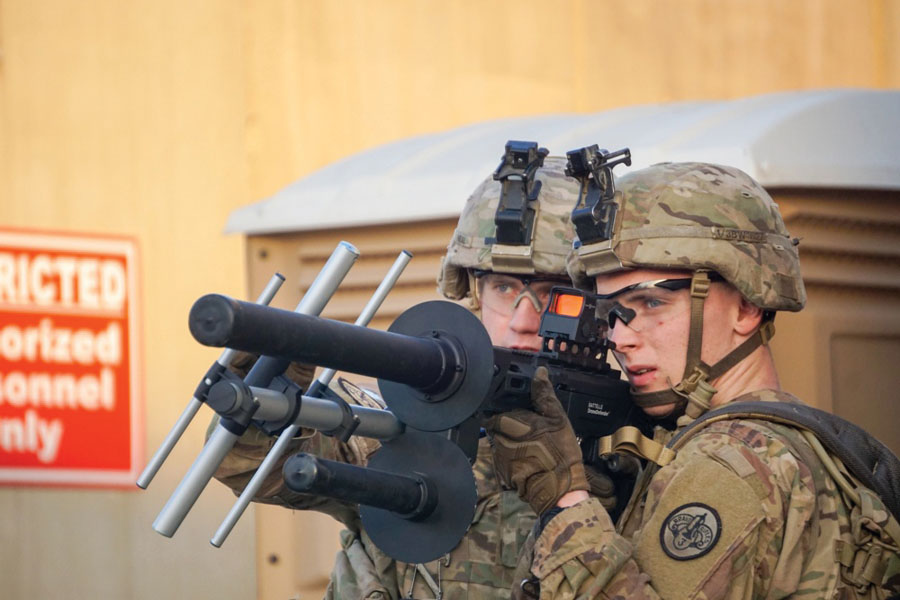 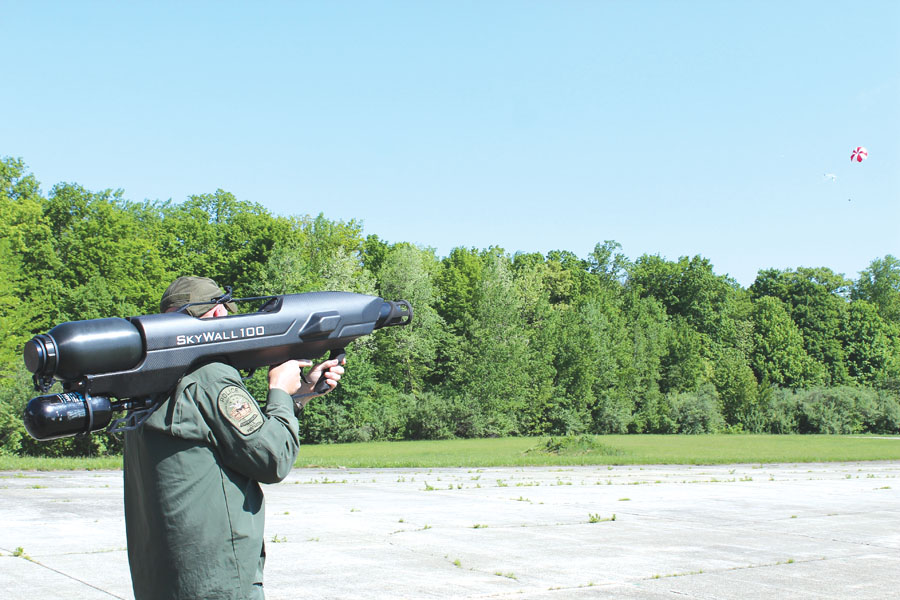 OpenWorks Engineering’s SkyWall 100 can take down a drone with a net that uses a parachute to slowly bring the UAS back to the ground. 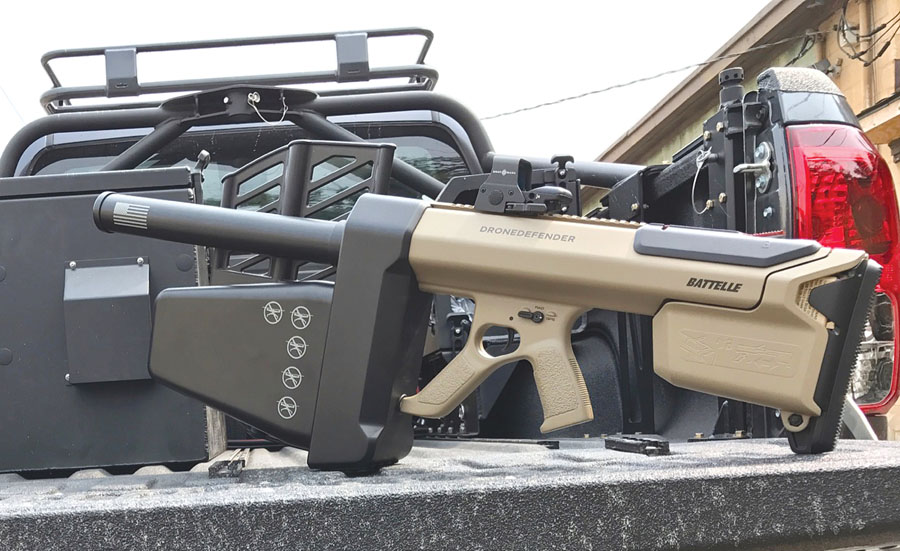 THE TAKEAWAY
Many other counter-UAS devices are on the market and even more are in development. As the threat changes, so too will the response. All of these solutions are not available to the general public. Customers for the above countermeasures are military and government agencies around the world. There are no plans to extend the technology to civilian use.

For most of us, our drones will continue to fly in a safe and legal manner. We will never need to worry about nets, jammers, or birds of prey stopping us from enjoying our passion for drone technology. Those few who are willing to break the rules, however, should be ready for a swift takedown from these and other countermeasures. Better to join the rest of us and just fly legally.

SkyWall 100’s net entangles the drone before the parachute deploys.