The next time you are out flying a mission during civil twilight, or under a daylight waiver to 14 CFR Part 107, spare a thought for the people who design your beacons. As drone pilots, we demand a lot from our strobes: they should be bright as the sun, light as a feather, tough as nails, cheap as dirt, easy as pie, smaller than a postage stamp, and flash for days on a single battery charge. 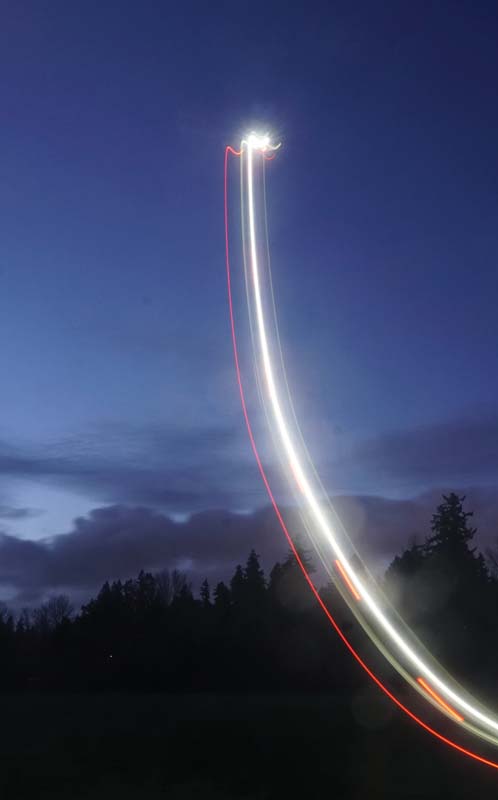 Equipped with a pair of FoxFury D3060 lights, a drone soars into the darkening sky of civil twilight, in full compliance with 14 CFR Part 107.

Of course, that combination of attributes cannot be achieved in this material reality: The laws of physics simply won’t allow it. Longer endurance means a bigger battery, which increases weight. A brighter beam means a bigger lamp and more bulk. A rugged housing increases both size and weight, as do user-friendly controls. All of this means that designing a drone strobe involves a series of tradeoffs, and no single configuration will be optimal for every application.

That said, FoxFury has made a whole series of fine choices in developing its new D3060 drone light, creating a strobe that is well-suited for the overwhelming majority of small Uncrewed Aircraft System (UAS) operations.

Let’s start with the basics. The D3060 actually incorporates two separate lamps: one facing forward and one on top. They can be individually controlled and set for continuous high- and low-intensity beams, as well as a high-intensity strobe. At peak output, each emits a full 200 lumens, satisfying the three-mile visibility requirement under 14 CFR 107 for civil twilight and nighttime operations.

The unit is powered by an internal battery, recharged using a standard USB-C connector. Depending on your specific combination of settings, the D3060 will run for one and a half to three hours on a single charge. It is waterproof and shock resistant, and incorporates a wealth of features that make it simple and intuitive to use.

Steve Jobs made Apple a consumer electronics legend with a relentless focus on the end user’s experience of his company’s products—something known today to as “quality of life” in software development circles. That isn’t a concept that frequently rates as important among drone strobe users, but FoxFury delivered it nevertheless. When you connect the D3060 to its included recharging cable, a red LED lights up to let you know it’s receiving power, and then it turns green when the charge cycle is complete. It’s a small feature, but it’s reassuring to know before you are heading out for an important night operation that your strobe is indeed fully charged.

If I were to offer a suggestion for future models, it would be that FoxFury emboss either button with a letter “F” or a letter “T,” so you know which emitter you are going to power up before you actually press it. I dazzled myself several times during testing by looking down at the light while I thought I was turning on one lamp, facing away from me, when it turned out I was actually turning on the one pointed directly at my face. I will say this: it is very bright! 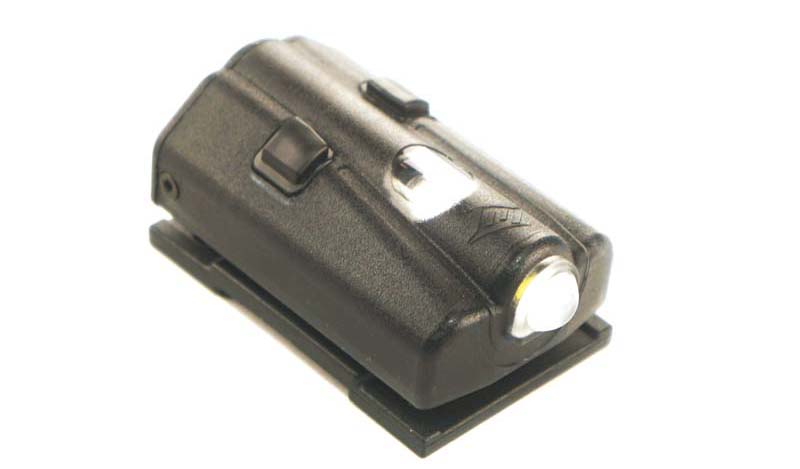 Developed for use on small UAS, the D3060 from FoxFury is also suitable for wear on helmets and other personal protective equipment. 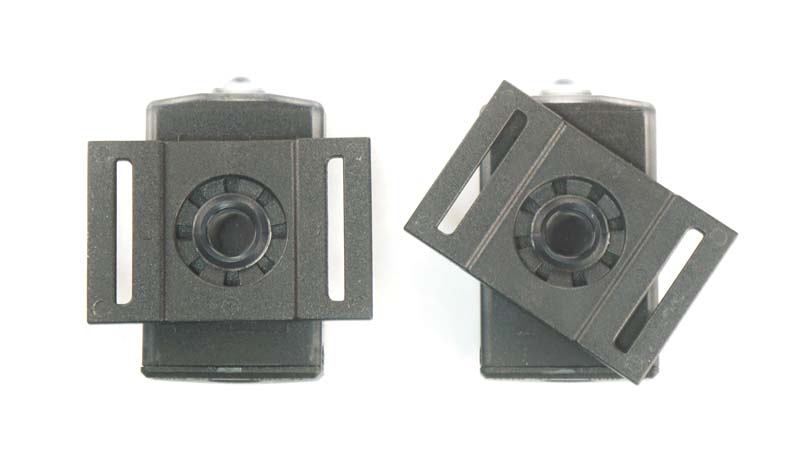 The FoxFury D3060 base plate is made of rugged nylon, and it can swivel a full 360 degrees to accommodate different mounting options.

Each of the FoxFury D3060’s two lamps has a maximum output of 200 lumens, sufficient to meet the requirements of operations during civil twilight under 14 CFR Part 107, as well as nighttime operations occurring under a waiver. 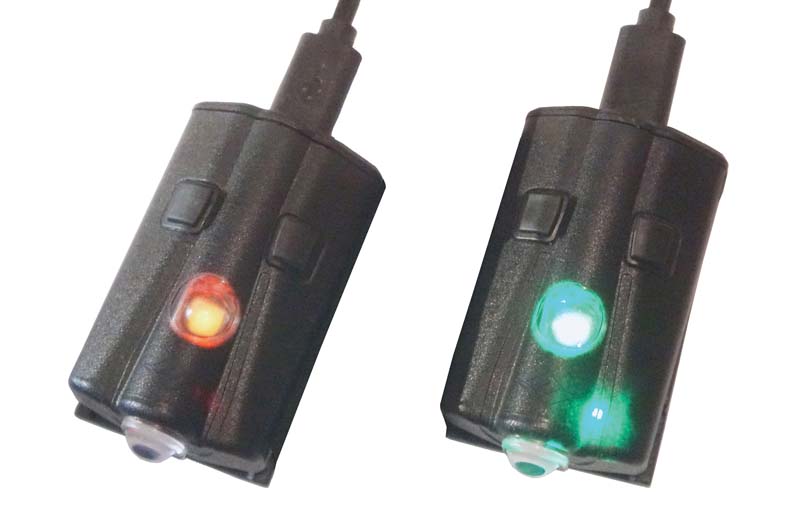 One handy feature of the FoxFury D3060 is the inclusion of colored LEDs to indicate charge status. Red means charging, and green means the internal battery is fully charged.

Another example of where attention to detail in the design of the D3060 pays dividends is in the mounting options that are available for the unit. Each light arrives with two adhesive-backed squares of 3M Dual Lock Fasteners, which are surprisingly strong: both sides are all hooks, all the time.

The base of the D3060 is designed to accommodate a square of Dual Lock Fastener, while the other square is attached to your drone. The base also swivels 360 degrees, allowing you to adjust the angle of the light for your particular mission. In addition, it includes a pair of slots for alternative mounting options, such as a cord or strap. These mounting options allow the D3060 to be used in other applications besides drones, such as helmets, safety vests, and other personal protective equipment.

Constructed with polycarbonate, nylon, and silicone components, the D3060 is extremely rugged. It’s fire resistant, works while submerged in water, and can sustain a fall from 10 feet onto a hard surface. Basically, it will still be working after just about any drone it’s attached to is wrecked—as tough as a drone strobe needs to be. 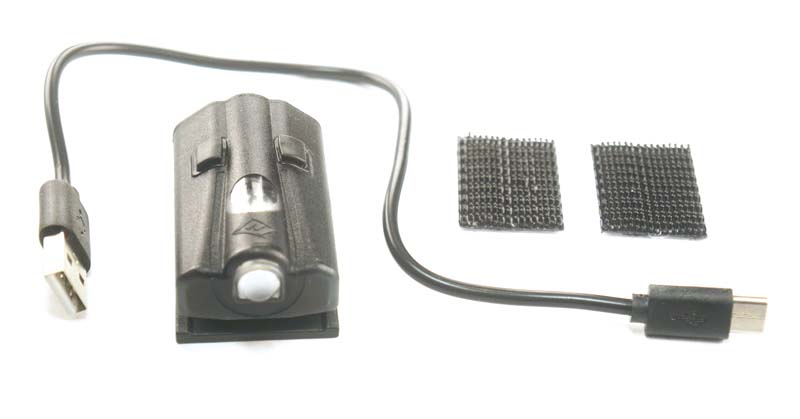 The FoxFury D3060 comes complete with the light itself, as well as a pair of adhesive-backed squares of 3M Dual Lock Fasteners, and a USB-C cable for recharging its internal batteries. 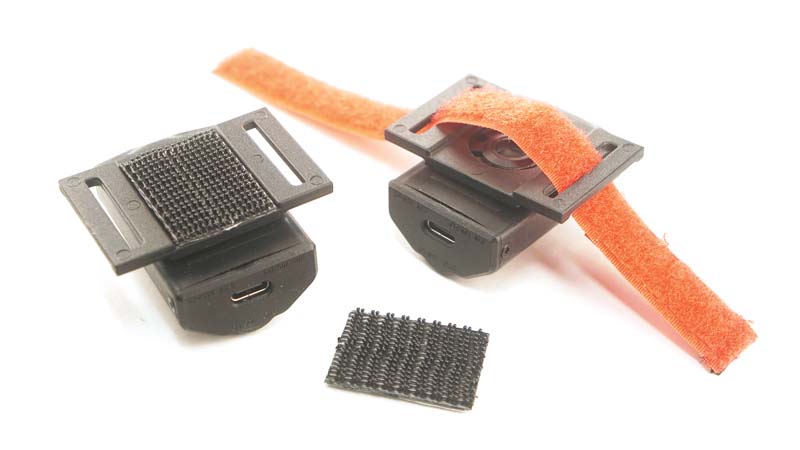 The D3060 drone light from FoxFury has multiple mounting options, including 3M Dual Lock Fasteners and slots to accommodate straps and other connectors. 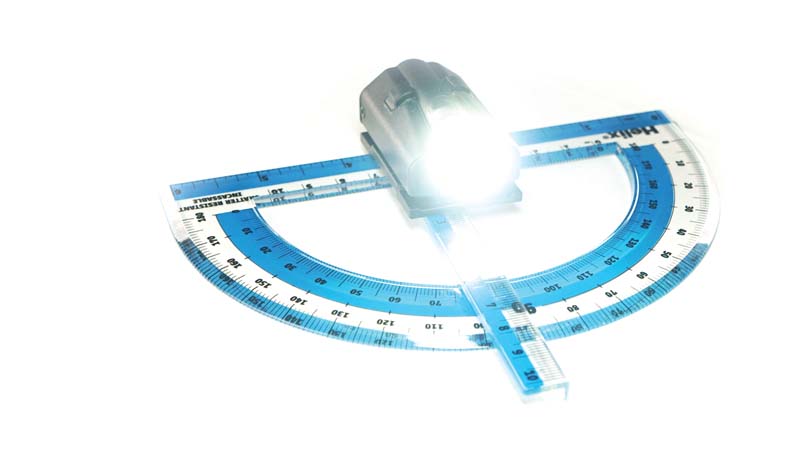 The full intensity of the FoxFury D3060’s twin lamps are limited to a 60-degree cone. Beyond that, visibility drops off rapidly.

At 37 grams, the weight of the D3060 is almost negligible, even on small commercial drones. Testing it on an industry-leading platform from a well-known manufacturer, I found a five-second difference in flight time, depending on whether or not the light was attached. If you fly missions where that is a meaningful margin, you definitely need to step back and reevaluate your operating parameters—you are flying way too close to the edge to be safe.

Something I did notice while testing the D3060 is that there is a cone, about 60 degrees wide, where each of the lamps is at its brightest. I verified this using a protractor. Then I found that FoxFury lists this fact among the specifications on its website. By the letter of the law, that isn’t a problem. FAA regulations for operations during civil twilight make no mention of a required viewing angle for your strobe.

That said, it did prompt me to wonder: What if a crewed aircraft was approaching your drone at a 90-degree angle? The pilots would likely not spot your drone until they were much closer than the requisite three miles, creating a potential conflict. Fortunately, this issue can be at least partially offset by simultaneously using both lamps.

Another factor that might be a drawback for some pilots is the price: $59.00. Can you purchase a working strobe for less than that? Absolutely. Will it check all of the same boxes as the D3060, especially when it comes to being lightweight, robust, and easy to use? Probably not. The D3060 offers a solid balance of features for pilots who want to know they have a reliable solution in their hands that they can count on, even under adverse conditions.
TEXT AND PHOTOS BY PATRICK SHERMAN 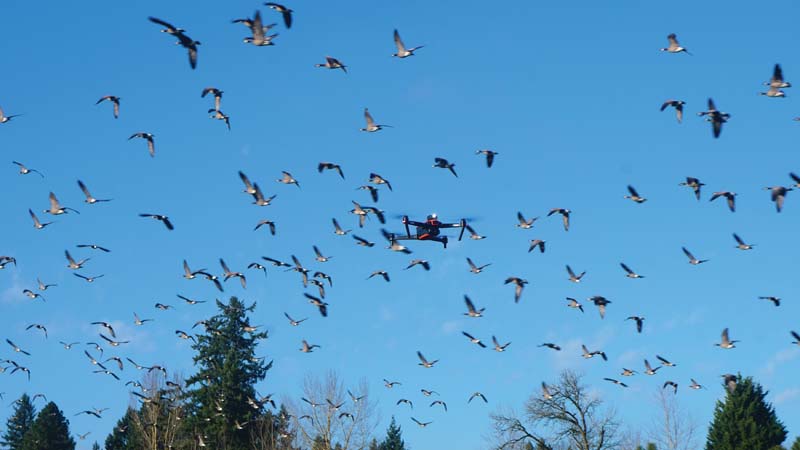 While drone strobes are most often regarded as night flying accessories, they can also be a big benefit during daylight operations, making it easy to identify your aircraft even against a cluttered background.

During my testing, I discovered another important fact: Strobes are nearly as useful during daylight hours as they are at night. Crewed aircraft use their anti-collision lighting around the clock, and perhaps that is something we drone pilots should be doing, as well. Not only would it make it easier for other air traffic to spot our machines, but it makes it easier for us to keep track of them as well.

Having a strobe on board makes it easy to spot your aircraft against any type of background, and may also significantly enhance your visual line of sight under certain lighting conditions. If you haven’t flown with a strobe during the day, you owe it to yourself to give it try. You might be surprised at what you’ve been missing. 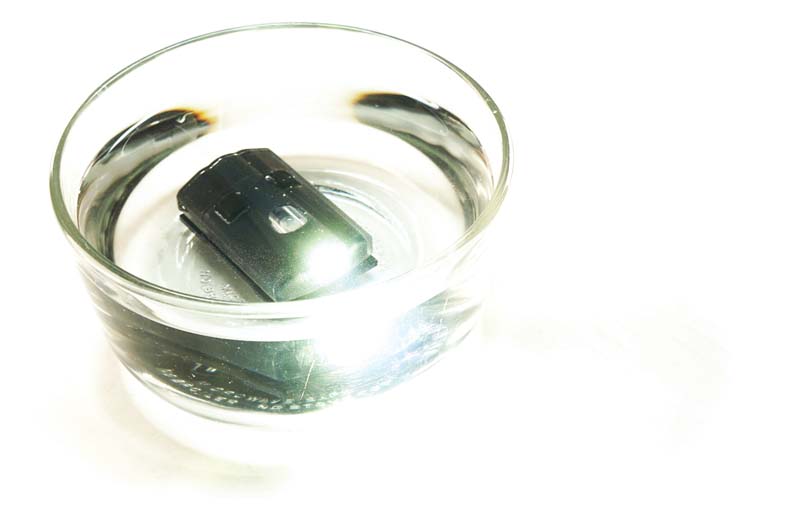 Not only is the D3060 from FoxFury fire resistant and capable of sustaining a 10-foot drop onto a hard surface, it even works underwater: all conditions that would likely ruin any drone that is carrying it. 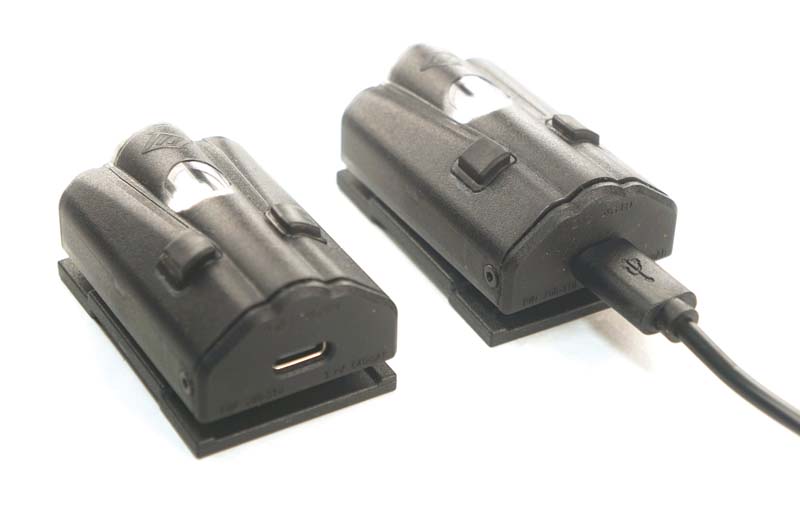 The FoxFury D3060 recharges its internal battery using a standard USB-C cable, which is included with the kit.