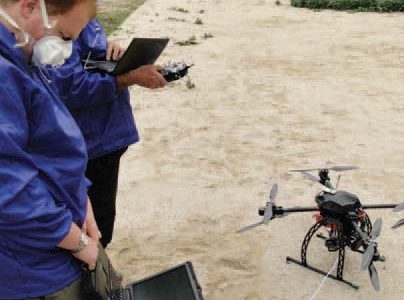 At 3:46 p.m. (local time) on March 11, 2011, a 14-meter, earthquake-triggered tsunami hit land in Japan. Unfortunately for the residents of Fukushima Prefecture, it struck the coastal nuclear-power station, Fukushima Daiichi, causing huge volumes of radiation to be released into the environment. The disaster was quickly compared in scale to that of the 1986 meltdown of the Soviet nuclear-power plant in Chernobyl, the only other level-7 event—the most serious—as classified according to the International Nuclear and Radiological Event Scale. The water surge also washed away 23 of the 24 devices used to monitor radiation and potential leaks, hampering rescue and response efforts.

For Dr. Tom Scott, a nuclear-materials specialist at the University of Bristol in England, ensuring access to key data in the immediate aftermath of a nuclear disaster is essential to making life-saving decisions. For Scott and his company, ImiTec, the events  surrounding the Fukushima disaster were a wake-up call that led him to develop a drone-based, radiation-mapping system that could be on hand to help should such a tragic situation arise again. I caught up with him and Chris Abbott, ImiTec’s CEO, to find out more. 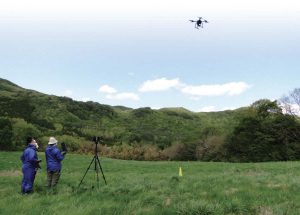 “The first thing you want to know as a responder is where the spread of radioactivity is, where the danger is, and how intense is the risk,” says Scott. Without any data, the Japanese emergency responders were operating in the dark. “Nobody had a clue about where the radiation had gone,” he says. Blind to this information and as a
precaution, the Japanese Government enforced a 20km exclusion zone around the site, evacuating more than 150,000 people from their homes, something seen as both arbitrary and unnecessary.

Access to maps of the radioactive fallout and intensity, especially in the immediate aftermath of the disaster, could have proved crucial and might have led to different
decisions being made, Scott argues. “Had they had these maps, they might have realized that the majority of those people didn’t need to move. And while nobody has died of radiation poisoning from Fukushima, you have well over a thousand people who died because they were forcibly displaced,” he says. The figures are backed up by a report from Japan’s Reconstruction Agency, which showed that fatigue, transfer trauma, and delays in getting hold of medical supplies were to blame. Furthermore, a number
of residents committed suicide, fearful of never being able to return to their homes. “Being conservative, you can say that at least 50 percent of the people who were moved
probably didn’t need to,” he says. “In reality, it might be closer to 80 percent.” 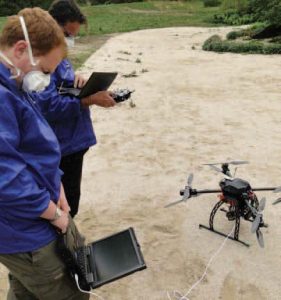 Using New Tools
This event got Scott thinking about better ways of quickly mapping radiation following an
incident. For him, the idea of using a drone, the technology of which was still in its infancy at the time, was appealing, and he started looking at the possibility of using the devices as inexpensive, rapid-response vehicles that could operate safely in the danger
zone. “A drone won’t get cancer; a human will,” he says. Meanwhile, small micro-size gamma spectrometers—the devices used to detect and measure radiation—were coming onto the market made out of cadmium zinc telluride, which, at the size of a sugar cube, were exponentially smaller and lighter than previous detectors and perfect for fitting on a drone. Arduino boards, also new at the time, were the final piece in the puzzle, providing fast, reliable platforms to run the software,designed in-house, to control the drone, receive and process sensor data, apply encryption, and transmit the
information to a remote and safe location.

This sort of system wasn’t only useful in disaster situations, Scott figured. When working on a project for the North Atlantic Treaty Organization in Romania, which was looking at ways of cleaning up radioactive material from Russian uranium mines worked heavily during the Cold War, he realized that an airborne-based radiation-mapping system would be useful here, too. “These sites had a very significant pollution problem,” he says, “but before you can clean up some of the contamination, you need to know where it is.” There was an added complication: The sites were nestled deep in the Transylvanian Alps, making access difficult—dangerous even. “The terrain is very rough, and there are wolves and bears,” he says. Taking a prototype drone, funded by the University of Bristol, Scott showed its potential at such a remote, difficult site,
gathering enough data to prove that the concept worked. He took this data to Sellafield, the United Kingdom’s nuclear-waste reprocessing site in Cumbria, assuming correctly that such a novel system would be of use to them. Sellafield quickly invested in the project.

Developing the Drone
“That’s when we started developing the drone,” says Scott, as ImiTec worked toward a commercial product. Drone technology at this point was in its infancy, so Scott and his team set out to develop their own airframe in collaboration with colleagues in the aeronautics department at the University of Bristol. “We were specifically making a drone that would comply with both Sellafield and the UK’s aviation regulator—the Civil Aviation Authority—requirements,” he says, but creating a frame that conformed to stringent safety regulations at nuclear facilities wasn’t easy. “We went for a design that was the lightest possible—aluminum and carbon fiber—and we built in redundancy and fail-safe software.” They created an X-shape frame with two motors on each  arm—meaning that, if one motor failed, there was a backup, and if one arm completely failed, it would still stay airborne as long as at least three motors were operating on the other three arms.

But drone technology was developing fast. “Initially, our drone system was probably the most complex available for specialist flying over restricted sites,” says Scott, “but now, in 2016, there are a number of systems that you would say are better than what we initially developed and they are available for less money.” They quickly realized that their product was better suited as a self-contained system, compatible with third-party drone manufacturers. And their product was not just for drones, either. The core system, known as the Remote Isotopic Analysis System, is compatible with a whole host of remote platforms, including cars, submersibles, and even blimps. 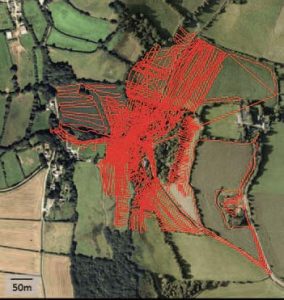 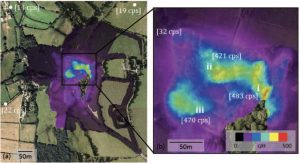 Real-World Testing
Back in Fukushima, Scott and the ImiTec team tested the system, quickly highlighting the potential benefits of an airborne system. “In Fukushima, we went to an area that
we were told was clear,” says Abbott. When they accessed the roof with the drone, however, they quickly realized that there was still radiation there. “This [information] would have been crucial to putting kids back into that school. We can get to inaccessible areas, and we can get there quickly.” And having the data relayed securely, in real time, has huge advantages for commanding resources in a fast-changing situation. If the weather changes, for example, “we can respond rapidly and relocate people, cordons, and safe zones—in real time,” adds Scott.

After five years of developing, refining, testing, and proving their system, Scott and the team are ready to take their system out of the academic realm and see it used in real-world settings, and there’s clearly interest. A UK nuclear company is already using a vehicle-based monitoring prototype, and a nongovernmental organization wants to make use of the system to assist with uranium cleanup operations in Asia, similar to the work done by ImiTec in Romania. The UK Home Office, too, has expressed interest.

“This is a new tool, and it’s valuable,” says Scott. “It gives us a capability to get to inaccessible areas quickly, which we just didn’t have five years ago.” And if it helps
save lives in the process, that can only be a good thing. “The technology is very exciting, but bottom line, we wanted to do something that really makes a positive
difference in the world.”—Dave Stock