Flying the Ptarmigan hexacopter in challenging conditions
Springtime in northern Alaska is the right time for a whale hunt. Vast sheets of sea ice crumble together into huge masses that grind into the ocean floor, anchoring it for a time. To get to open water to hunt whales, Inupiat whaling crews will break miles of trails over the rough ice. Once to the ice shore, they will make camp, launch boats, and catch whales that will feed their communities for the year. It’s a millennia-old tradition

Sea-ice challenges in Alaska
The mounds of sea ice are like hills, and pieces of ice can be bigger than a car. Villagers use pickaxes to smooth out the way. These trails can take more than a month to build. The landfast sea ice around the Chukchi and Beaufort seas has experienced a large-scale thinning and retreat over the past few decades, making the ice conditions more difficult for trail building and, at times, more hazardous. This has caught the attention of scientists at the University of Alaska Fairbanks (UAF) who depend on indigenous people to help them understand the local sea-ice environment. The local people and researchers have worked together for more than a decade.

It can be difficult to evaluate the roughness of the ice from shore and to pick the most effective and safest route to the water. In the past, hunters have used a helicopter to take people up to look at the sea ice, but the time is right to look to an unmanned aerial vehicle (UAV) and imaging equipment for the job, according to Hajo Eicken, a sea-ice scientist at UAF.

“Unmanned aircraft are something you can deploy in challenging conditions,” Eicken says. “It’s quiet, causes less disturbance, and you get better images.”
Eicken has been working with local hunters in northern Alaska for about 10 years with the Seasonal Ice Zone Observing Network (SIZONet), an interdisciplinary project for observing seasonal ice in the context of the environment. Under SIZONet, the sea-ice group from UAF’s Geophysical Institute has monitored sea ice and mapped trails using local observations, radar, webcam, and satellite images. The work has revealed sea-ice changes due to warming temperatures and changing weather patterns, which have been affecting Barrow and other communities in the Arctic. 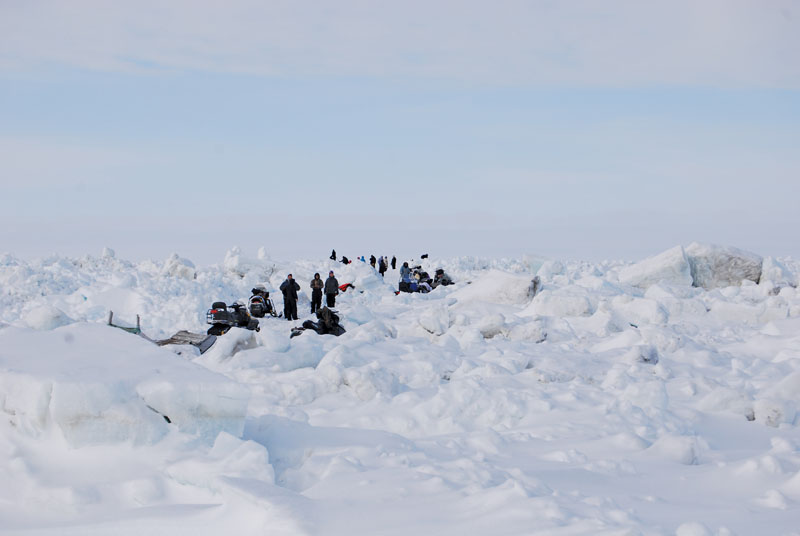 Whaling crews take a break from constructing trails through pressure ridges made up of huge piles of sea ice to watch the Ptarmigan survey the ice around them. The spot is several miles into the Chukchi Sea. (Photo by Dyre Dammann)

Mission to map sea ice in Barrow
In April 2015, Eicken worked with UAF’s Alaska Center for Unmanned Aircraft Systems Integration (ACUASI) to conduct a “proof of concept” mission in Barrow. The plan was to see if a UAV could help to map the sea ice near Barrow.

The UAV used for this mission is called the Ptarmigan, a small hexacopter designed and built by UAF student Ben Neubauer. It was fitted with a DSLR camera and a small, high-precision GPS unit donated by NovAtel.

Eicken and his team picked a place away from hunting activities on the ice near Barrow to do the first flight. The area featured a pressure ridge: a place where ice floes are crushed under pressure from surrounding ice. The result is a large pile that can reach more than 10 feet tall. The largest ridges reach so deep that they grind themselves into the sea floor, further stabilizing the ice.

Eyal Saiet, a systems and technology integration specialist with ACUASI, was in charge of making sure that the Ptarmigan had the right equipment, battery power, data storage, and download capabilities for the mission. He also had to determine what type of data to collect in the most efficient and usable manner. Too many images can be bulky data hogs and nearly impossible to process. Not enough images means poor-quality maps. Saiet had to find a balance, which took months of planning. “It’s very easy to make data,” Saiet says. “It’s better to have less data of high quality than lots of it.”

The focus of ACUASI is to find out if an unmanned aircraft system (UAS) is right for the job and what data needs to be captured, said Cathy Cahill, ACUASI’s director. The center has been conducting “proof of concept” missions in firefighting, pipeline monitoring, wildlife monitoring, and public safety for almost 15 years. “Alaska is the perfect place to use unmanned aircraft in this type of research,” Cahill says.
The Federal Aviation Administration (FAA) has recognized this, naming ACUASI host of the Pan-Pacific UAS Test Range Complex and part of the FAA’s Center of Excellence in UAS. ACUASI has partners in Hawaii, Oregon, Montana, Mississippi, Kansas, and Iceland.
“We’ve been around a long time,” Cahill says. “We’ve had to prove we’re not going to do anything stupid.” The center has expertise in working with the FAA and using UAS in the national airspace and within five miles of an airfield. FAA officials have used data collected over the years in policy-making decisions regarding the use of unmanned aircraft in the United States. 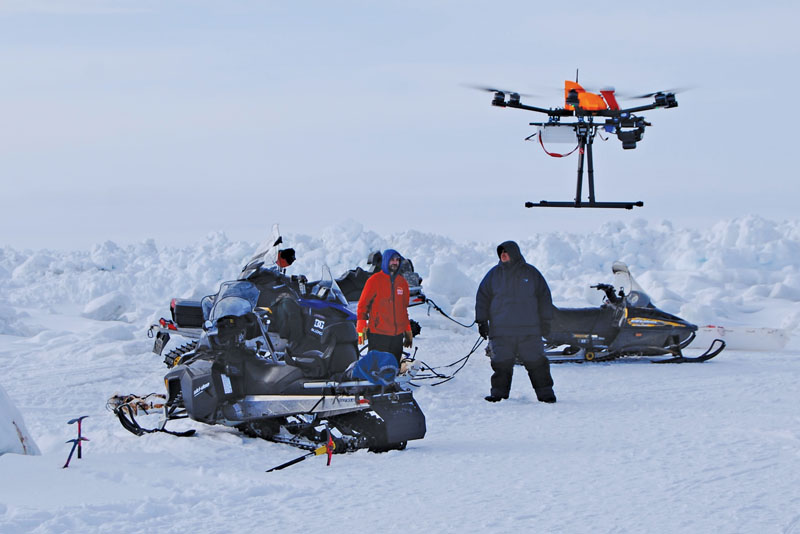 The Ptarmigan takes off on its mission to map sea ice. Researchers and their snow machines are in front of the massive sea ice held fast onto land every spring. (Photo by Dyre Dammann)

That expertise plays out in the high Arctic. Saiet has flown many missions at below-zero temperatures and, for this mission, knew enough to bring coolers with an electric heating blanket and some hand warmers to keep the Ptarmigan’s recharged batteries warm. “As an organization, we had concerns about how well the aircraft will perform in such high latitude,” says Saiet. At high latitudes, a compass’s deviation from true north could cause problems for the aircraft’s autopilot, but the first flight proved that for the location near Barrow the aircraft did just fine. The temperature was about 5°F with a wind of 10 knots, making it hard for pilot John Roberts to keep his fingers warm.

One surprise was that the Ptarmigan landing gear froze to the ice between flights. “It would warm up while flying,” Saiet says, “then cool down after landing. That caught us off guard.”

After the first flight, the group joined the whaling crews who were working on the ice trail. The test flight showed that maps with topography in extraordinary detail could be made. The whalers had expressed interest in such a map, says Dyre Dammann, a doctoral student at UAF who worked on the mission. “A key priority is that you have to provide something back that is beneficial to the community,” Dammann says. “Hunters have expressed an interest in a map showing the roughness of the sea ice. We came up with a product.”

The team conducted two more flights, catching the attention of those workers on the ice. Afterward, Saiet used a technique pioneered at UAF’s Geophysical Institute, called “structure from motion,” to create a three-dimensional map of the ice surface to share with the whaling crews. 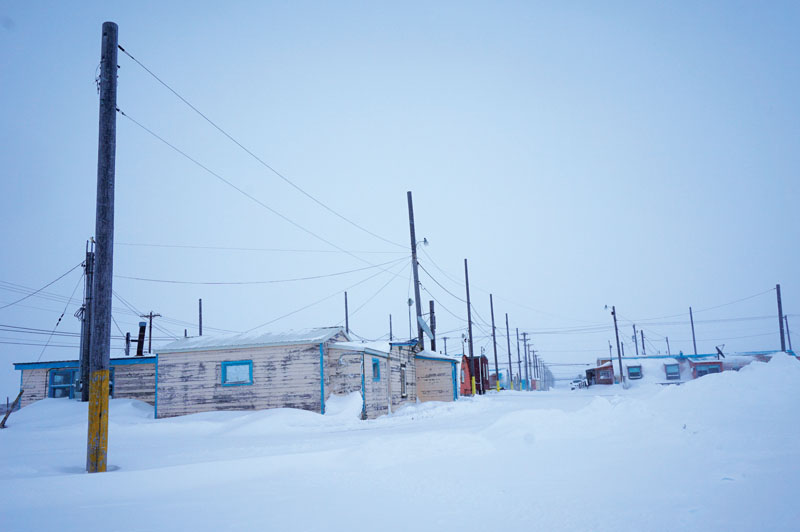 A Barrow street during April 2015. Community members know sea ice well, having lived with it for thousands of years. (Photo by Eyal Saiet)

The future of using UAVs in the Arctic
The Barrow mission surveyed about half a mile, but next spring, Eicken wants to do a 10-mile survey, possibly using a fixed-wing unmanned aircraft. A large-scale survey would provide useful information for hunters, but Eicken believes that it would also give scientists a better understanding of the ice volume locked up in pressure ridges. Knowing how thinning ice from warmer temperatures piles up will give scientists a clearer look at how the ice will behave under these conditions.
“By measuring the thickness of the ice from the boat launch to Barrow and large parts of the ocean, we could reduce unsafe situations on the ice,” Eicken says.
The Inupiat have developed an intimate relationship with sea-ice cover, and their understanding is different from Eicken’s university training in many ways. Sharing information with the local indigenous people and hearing their interpretation of it are crucial to understanding sea ice.
by Diana Campbell