Multirotors and sports cameras are very nearly synonymous at this point in time. The popularity of one has undoubtedly boosted the popularity of the other. I bought my first DJI Phantom in part because I already owned a GoPro and wanted to see if I could make it fly. For others, it may be that they already owned a quadcopter and wanted to see if they could lift a camera with it. Yet this mutually beneficial symbiosis hasn’t led to any significant changes in the way sports cameras are made, notably the lens. But with a simple modification, you can make that camera even more sky-worthy.

Fishes don’t fly
I don’t hate the fisheye lens; it has its uses. But aerial photography isn’t one of them. Wide angle is great for fast-moving, on-the-ground shots that are close to the action. You may even use it on racing FPV quadcopters because of the benefits of a wider field of view. However, if beautiful, high-quality video or photography is what you’re looking for, then it’s less than ideal. It warps the horizon, as well as any lines like roads, buildings and trees. It just looks unprofessional overall.
There are ways of fixing the image in postproduction. As I have explained in a previous article, you can do this with After Effects, Photoshop or the free GoPro Studio. The result is decent enough, but you will always get some blurring at the edges. You can also use the GoPro in “narrow” mode, but that will cause a loss of image resolution as well because you are no longer using the full sensor. Switching lenses is the only way of benefiting from the full resolution of the camera.

Scratched optic? A disguised opportunity
Many people fly their camera without a protective housing to reduce weight. It’s therefore very likely that it will get scratched at some point, maybe during a rough landing. That’s what happened to my GoPro Hero3 Black. Rather than throw it away, I bought a distortion-free replacement lens, opened my camera and made the repair. The operation took less than an hour. I got the lens from Peau Production (peauproduction.com), the largest online distributor of lenses for sports cameras (that I know of!).
Replacing a lens is easier than you might think … at least as far as the GoPro cameras are concerned. The full procedure is well documented on the Internet and is within the skill-set of the average DIY’er. The lens is simply screwed in. It’s merely a matter of disassembling the camera to get a good grip on the lens and lens mount. DO NOT cut corners by simply grabbing the camera and unscrewing the lens directly. Some tutorials show people doing this, but it increases the risk of damaging the device.
Peau Production has a video on their website that shows the best way of going about it. But if you’re not comfortable with the DIY approach, you can always mail your camera over to the San Diego-based company and they will do it for you. You can also buy a camera with the lens already removed or replaced.
The stock lens is always the hardest to remove because the manufacturer uses an adhesive to hold it in place. Once it’s out, any future lens replacement is a breeze. 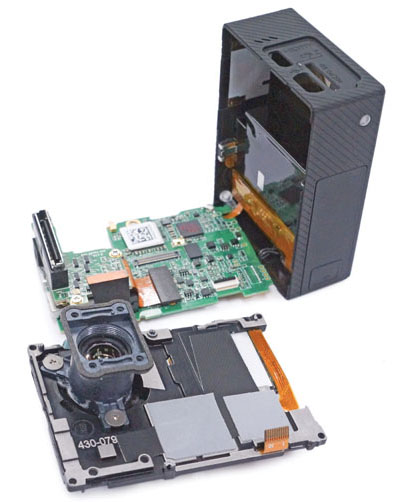 The Hero3/3+ cameras are the easiest to modify, according to Ramseyer. On the Hero4, there are tiny orange ribbon cables that sometimes come undone after reassembly and will render the camera nonoperational. “If something doesn’t work when the camera is all back together, don’t panic, just open it all back up and re-seat those connections,” says Ramseyer.

Dozens of lenses to choose from
Peau Production sells lenses for the GoPro, the Xiaomi Yi, the SJCAM, and the Sony Action Camera, all identified so you know which ones will work with your device. Most of the GoPro lenses should also work on the Mobius.
Nolan Ramseyer is the CEO of the company. “We’ve found that the ideal focal length for an aerial platform is somewhere between 3.5 and 4.5 mm,” he says. “This provides just enough of a zoom while also not being too zoomed in to introduce more jello or jitter.” Granted, the field of view will be narrower, but that is usually desirable for an aerial platform. “In the air, we typically have much more room to move away from an object, but oftentimes getting too close can be hazardous. So a lens that is more zoomed in allows the user to fly from a safer distance.”
You can get a lens with a focal length up to 25mm, but the longer ones are front-heavy and the extra weight may throw off your gimbal.
As for the f-stop, “around f/3.0 is ideal to achieve a good balance of depth of field and brightness,” according to Ramseyer.

Not all lenses are made equal
When choosing a lens, you need to consider its optical quality or “resolution,” which is labeled in terms of megapixels (MP). Lenses don’t have pixels per se. This number simply means that a 5 MP lens is good enough, optically, to capture a true 5 MP image. Full HD video is 2.1 MP. Therefore, if your GoPro Hero3 is used for recording only video, a 5 MP lens is good enough. However, if you plan on recording 4K (8.3 MP) video or taking 12 MP pictures with a Hero4 Black edition, you will need a 10 MP lens or better.
You can find many aftermarket lenses on eBay or Aliexpress. However, I would advise against buying anything without an MP rating. Some of those lenses where made for CCTV equipment (security cameras) and may be very low quality.

These two stills are from video shot with a GoPro Hero4 Black. The one on the left was taken with the stock lens that has a 123-degree field of view, but it has the fisheye distortion, visible in the way lines curve inward at the top. The image on the right was shot with a 5.4mm, 60-degree field-of-view lens. The distortion is gone, and we are closer to the action.

Focus
The most important step after replacing your camera’s lens and reassembling the body is focusing. This is achieved by rotating the lens to move it closer or farther from the sensor. It’s a delicate adjustment, where a fraction of a rotation can mean the difference between a poor or an excellent image quality.
Make sure you use an object far away as a reference point, like the house on the other side of the street. Having an HDMI adapter that allows you to connect your camera to a screen can help with the initial focus. However, a sports camera records video at a lower resolution than for pictures. For fine-tuning, you may have to take a photo, download it to a computer to view it up close, make a small adjustment to the lens, and repeat. All it takes is patience. Be very careful not to scratch the lens. Metal tools should be avoided at this point. 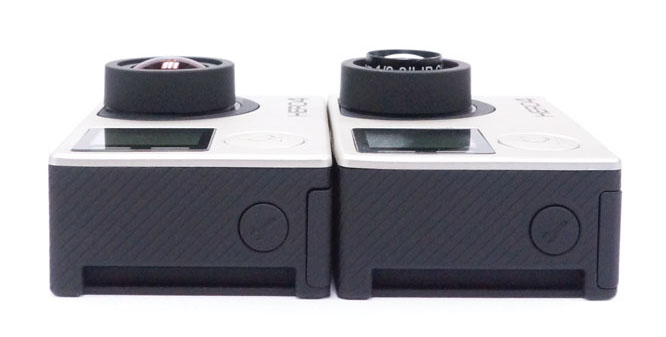 Some lenses, like this 5.4mm, may protrude from the housing. It’s not a big deal if the camera is flown bare, but it’s important to note that it will not fit in the standard GoPro protective housing.

It’s camera surgery, not brain surgery
What surprised me about this project is how easy it actually was. Many people would shy away at the idea of opening a camera, but that may prevent them from improving their device’s most crucial component. As long as you are cautious and apply no excessive force, this hack is quite feasible, even for first-time tinkerers. In fact, you might even be tempted to buy your friend’s scratched camera at a bargain so you can fix it. Making gorgeous video with other people’s throwaways … now that’s a sweet deal! 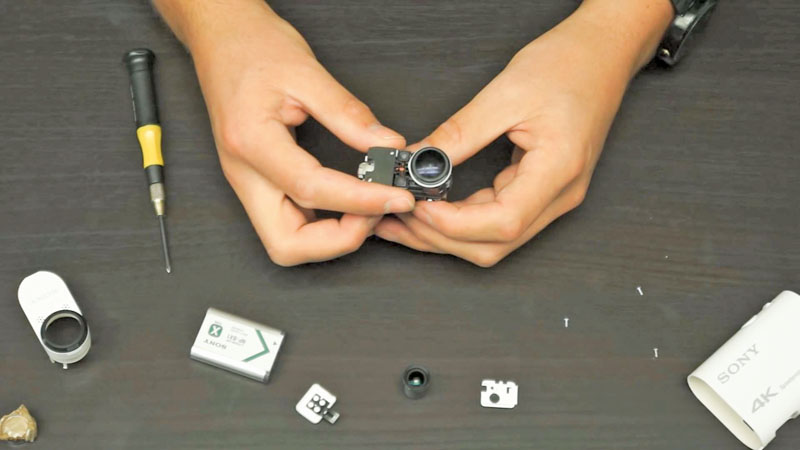 The GoPro cameras aren’t the only ones the can be worked on. Peau Production also has a video showing how to change the lens on the new Sony 4K Action Camera.