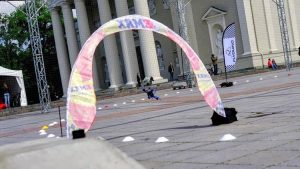 Semi-professionals wearing virtual reality headgear compete for a $50,000 cash prize in the Challengers Cup Final on Friday and Saturday January 19 – 20, at the South Point hotel-casino at 9777 S. Las Vegas Blvd.

Competitors qualified during 2017 races that began in Buenos Aires, Argentina, and concluded in Manila, the Philippines.

Visitors can buy tickets to watch for $20. You’ll be admitted to Friday’s practice runs and the competition on Saturday afternoon. The elimination round will get underway at 12:30 p.m. with the finals set for 3:20 p.m. Saturday.

Unlike backyard enthusiasts, the competitors are fully immersed in technology as they steer their high-speed aircraft while wearing VR goggles that display live images from cameras mounted on the drones.

Race courses are designed to test the nimbleness of both the vehicles and their pilots.

While the drone races — there are roughly 100 of them a year in the U.S. — don’t draw anything like the crowds at a football bowl game, the drone organization’s website says it wants to expand the races as a spectator sport. It describes the activity as “the next evolution of motorsports.”